Promotions - Diamond Light World. Hz and other phenomena. Augmentation of bone healing by specific frequency and amplitude compressive strains. Brain Wave Basics – What You Need to Know about States of Consciousness. By Linda Gabriel The fact that our brains are electrical is a relatively new discovery. 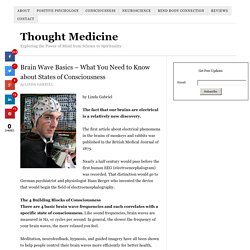 The first article about electrical phenomena in the brains of monkeys and rabbits was published in the British Medical Journal of 1875. Nearly a half century would pass before the first human EEG (electroencephalogram) was recorded. That distinction would go to German psychiatrist and physiologist Hans Berger who invented the device that would begin the field of electroencephalography.

The 4 Building Blocks of Consciousness There are 4 basic brain wave frequencies and each correlates with a specific state of consciousness. Meditation, neurofeedback, hypnosis, and guided imagery have all been shown to help people control their brain waves more efficiently for better health, higher performance, and a more positive experience of life. Beta Waves: 13-30 Hz.

Brainwave/Cymatic Frequency Listing. This is a listing of frequencies that various parties have claimed can affect the human mind or body in some way. 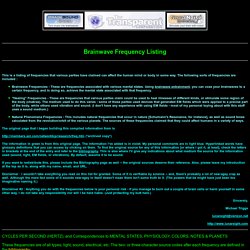 The following sorts of frequencies are included : Brainwave Frequencies - These are frequencies associated with various mental states. Using brainwave entrainment, you can coax your brainwaves to a certain frequency, and in doing so, achieve the mental state associated with that frequency. CYMATICS: Science Vs. Music - Nigel Stanford. Electroherbalism Frequencies and Anecdotes. Frequencies and Anecdotes The latest versions of the CAFL and NCFL plus a few articles are available in a paperback book called The Electroherbalism Frequency Lists.. 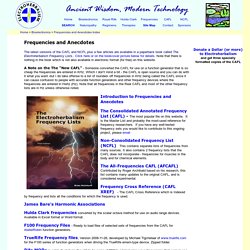 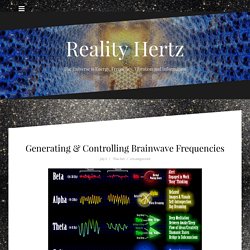 The Universal language is Hz. Scientist Proves DNA Can Be Reprogrammed by Words and Frequencies. © Adam Scott Miller We came across this article today and thought that it would be a great read for our viewers. 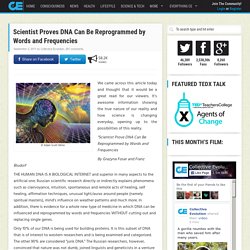 It’s awesome information showing the true nature of our reality and how science is changing everyday, opening up to the possibilities of this reality. Scientists Prove DNA Can Be Reprogrammed by Words and Frequencies. By Grazyna Fosar and Franz Bludorf THE HUMAN DNA IS A BIOLOGICAL INTERNET and superior in many aspects to the artificial one. Russian scientific research directly or indirectly explains phenomena such as clairvoyance, intuition, spontaneous and remote acts of healing, self healing, affirmation techniques, unusual light/auras around people (namely spiritual masters), mind’s influence on weather patterns and much more. Sound Healing Classes & Therapy - Globe Institute. Archetypal Frequencies Sound Healing Frequencies Sound Therapy Frequencies 200,000-500,000 Dolphins highest range 18,500 Highest frequency heard by average young woman 17,500 Highest frequency heard by average young man 15,700 High frequency that old televisions scream at 15,000 (Most people over 40 can't hear this high anymore) 5000-20,000 7th Chakra (Crown) 5000-8000 Treble control on a stereo 5000 4096 Highest note on a piano 4096 Quartz crystal (786,432 hertz octavized down - 1/2, 1/2, 1/2, etc.) 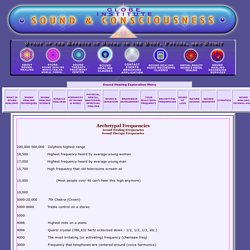 Sound Healing Classes - Globe Institute. The Hierarchy of Sound, Music and Energy There are 4 primary levels of energy in the universe when looking at it all from a frequency or vibration level. 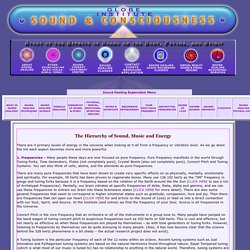 As we go down the list each aspect becomes more and more powerful. 1. Sound Healing Classes - Globe Institute. Intention As shown by Dr. 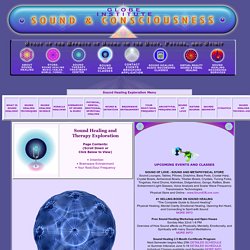 Emoto, if you focus love on water, it will create a beautiful geometric crystalline pattern when it freezes. If you focus any negativity on water (such as hate) it will form a discordant, chaotic pattern. Many other clinical studies (covered in Lynn McTaggart's book, "The Intention Experiment") have proven that your intention not only affects matter, it affects yourself and others.

Quantum Physics actually explains how this works. Sound Horoscope. A horoscope is a snapshot of a single moment in our solar system as seen from a geocentrical point of view. 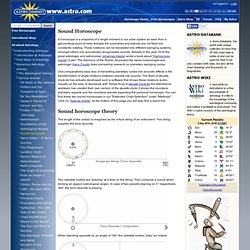 Actually the luminaries and planets are not fixed but constantly rotating. These rotations can be translated into different swinging systems, amongst others into acoustically recognisable sounds. Already in the year 1619 the great astrologer and astronomer Johannes Kepler wrote a book about "Harmonices mundi" (Latin: The Harmony of the World).

The Geometry Code: Universal Symbolic Mirrors of Natural Laws Within Us. ~ Isochronic Tones ~ : ~ Brainvawe Frequencies. I didn't do enough research before I published this post. 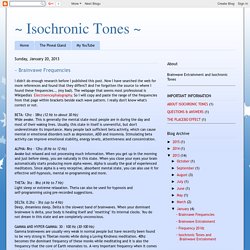 Now I have searched the web for more references and found that they differs?! And I've forgotten the source to where I found these frequencies... (my bad). The webpage that seems most professional is Wikipedia's Electroencephalography. So I will copy and paste the range of the frequencies from that page within brackets beside each wave pattern.