Tests Go First. Usability Testing In Design. A tech guru, Steve Jobs, once said: “Design is not just what it looks like and feels like. 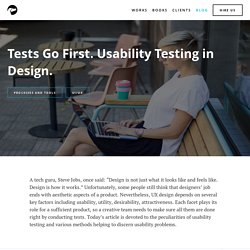 Design is how it works.” Unfortunately, some people still think that designers’ job ends with aesthetic aspects of a product. Nevertheless, UX design depends on several key factors including usability, utility, desirability, attractiveness. Each facet plays its role for a sufficient product, so a creative team needs to make sure all them are done right by conducting tests. Today’s article is devoted to the peculiarities of usability testing and various methods helping to discern usability problems. Why does usability matter? Before we go to the essence of usability testing, let’s find out what usability means and why it is called a core part of effective UX. When all these factors are considered, digital products provide a high level of usability which means people can easily and effectively use them. What’s usability testing? Types of usability testing methods Home Budget App Hallway Testing.

Get Professional. Useful Habits For UX Designers. To become a UX expert, designers need to work hard on the daily basis. 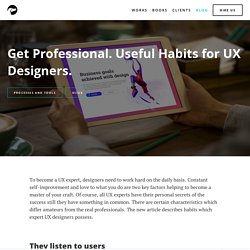 Constant self-improvement and love to what you do are two key factors helping to become a master of your craft. Of course, all UX experts have their personal secrets of the success still they have something in common. There are certain characteristics which differ amateurs from the real professionals. The new article describes habits which expert UX designers possess. They listen to users The success of a product is defined by several points including the level of satisfaction which it brings to the users. The process of user research applies collecting and analyzing the information received from the potential users. They conduct usability testing Usability is one of the key factors influencing the quality of a digital product. The level of usability is defined by five aspects: learnability, satisfaction, efficiency, memorability, and errors. 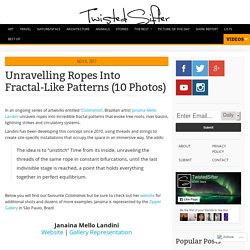 Landini has been developing this concept since 2010, using threads and strings to create site-specific installations that occupy the space in an immersive way. She adds: The idea is to “unstitch” Time from its inside, unraveling the threads of the same rope in constant bifurcations, until the last indivisible stage is reached, a point that holds everything together in perfect equilibrium. Below you will find our favourite Ciclotramas but be sure to check out her website for additional shots and dozens of more examples. Janaina is represented by the Zipper Gallery in São Paulo, Brazil. Combining Art and Technology Engages Students. To maker-educators Fabrice Florin and Edward Janne, maker ed is not just about the technology: “the real power comes from enabling students to build their own projects, combining art, technology, and storytelling,” they insist. 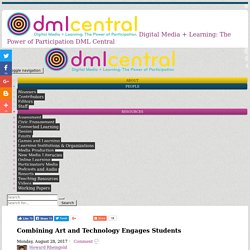 Although neither Florin nor Janne had previous training as educators, both are more than sufficiently savvy in multimedia storytelling. Florin was one of the founders of Apple’s Multimedia Lab (the Wikipedia page for the lab is a stub — someone should fill it out), which produced, among other pioneering explorations, Life Story and Moss Landing, which turned out to be prototypes for the kind of digital storytelling that emerged on the web more than a decade later. Florin also founded Videowest, which produced music videos long before MTV, and Newstrust, a nonprofit attempt to crowdsource an online guide to good journalism. Janne is no stranger to multimedia storytelling himself, as software engineer and 3D animator. Is Your Phone An Enemy To Creativity? Unplugging is a hot trend among creatives. 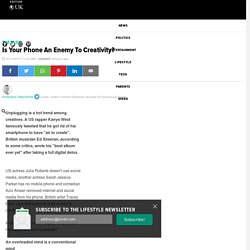 A US rapper Kanye West famously tweeted that he got rid of his smartphone to have "air to create". British musician Ed Sheeran, according to some critics, wrote his "best album ever yet" after taking a full digital detox. US actress Julia Roberts doesn't use social media, another actress Sarah Jessica Parker has no mobile phone and comedian Aziz Ansari removed internet and social media from his phone. British artist Tracey Emin says that a phone is an enemy to creativity.

Is digital detox just en vogue, or is it a real necessity for creative people? An overloaded mind is a conventional mind Kanye West may not be aware of it, but when asking for an "air to create", he quoted Harvard Medical School neuroscientist Moshe Bar, who found that innovative thinking is the most natural thing for us to do, when our minds are clear. In an experiment, Bar asked people to keep in mind a sequence of digits, and then create associations between different words.