Learning Political Economy. This is an experimental set of eight Resource blogs, that together with a dialogical and collaborative Service platform, are part of the infrastructure of the Learning Change Project to support and empower a community of change agents on Systemic Change. 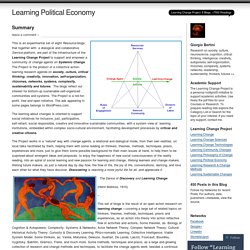 The Project is the product of a collective action-learning research agenda on society, culture, critical thinking, creativity, innovation, self-organization, rhizomes, networks, systems, complexity, sustainability and futures. The blogs reflect our interest for bottom-up sustainable self-organized communities and systems. The Project is a not-for-profit, free and open initiative. The ads appearing in some pages belongs to WordPress.com. The Dance of Discovery and Learning Change (Henri Matisse, 1910) The Project use a web system for communication and collaboration – a Google Apps Platform with some 40 tools for 800 member’s accounts, including Google+, plus several other tools as required by the members.

Blogs. Why the Failure of Systems Thinking Should Inform the Future of Design Thinking. "You never learn by doing something right ‘cause you already know how to do it. 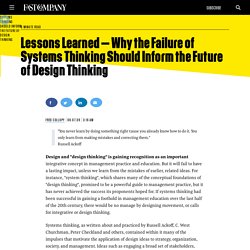 You only learn from making mistakes and correcting them. " Russell Ackoff Design and "design thinking" is gaining recognition as an important integrative concept in management practice and education. But it will fail to have a lasting impact, unless we learn from the mistakes of earlier, related ideas. For instance, "system thinking", which shares many of the conceptual foundations of "design thinking", promised to be a powerful guide to management practice, but it has never achieved the success its proponents hoped for.

Systems thinking, as written about and practiced by Russell Ackoff, C. I have been an enthusiastic student and teacher of systems thinking for almost three decades. Systems thinking started with an impulse that insights from Gestalt psychology and biology might be useful in understanding and affecting complex organizational and social problems. What is the alternative? Grammars of Engagement. SWP-3821-32871445.pdf. How to Design a Billion Dollar Company — Life Hacks for Business. News - Institut Michel Serres. An Ecology of Transformative Action Awaiting to be Discovered. An Integrated Approach to Global Change. Years ago, I took the road less traveled and set out to build an integrated approach to global change. 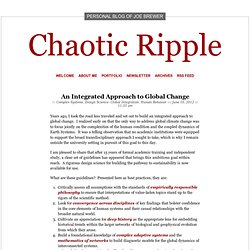 I realized early on that the only way to address global climate change was to focus jointly on the complexities of the human condition and the coupled dynamics of Earth Systems. It was a telling observation that no academic institutions were equipped to support the broad transdisciplinary approach I sought to take, which is why I remain outside the university setting in pursuit of this goal to this day. I am pleased to share that after 15 years of formal academic training and independent study, a clear set of guidelines has appeared that brings this ambitious goal within reach.

A rigorous design science for building the pathway to sustainability is now available for use. What are these guidelines? These best practices emerged in my experience as a practitioner-scholar who has worked closely with policy makers, campaign strategists, entrepreneurs, and research centers across the globe. Microsoft Word - FinalAug27Tmarkvart.doc - TMarkvart Inst change&aggregates policy.pdf. Sustainability and systemic change resistance. The environmental sustainability problem has proven difficult to solve. 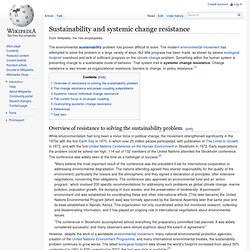 The modern environmental movement has attempted to solve the problem in a large variety of ways. But little progress has been made, as shown by severe ecological footprint overshoot and lack of sufficient progress on the climate change problem. Something within the human system is preventing change to a sustainable mode of behavior.

That system trait is systemic change resistance. Change resistance is also known as organizational resistance, barriers to change, or policy resistance.[1] Overview of resistance to solving the sustainability problem[edit] While environmentalism had long been a minor force in political change, the movement strengthened significantly in the 1970s with the first Earth Day in 1970, in which over 20 million people participated, with publication of The Limits to Growth in 1972, and with the first United Nations Conference on the Human Environment in Stockholm in 1972. Theories of Change. Overview Responding to tensions and violence between ethnic groups around the world, a growing number of non-governmental organizations have developed innovative programs and approaches to help resolve conflicts, prevent violence, and promote more cooperative relationships between groups. 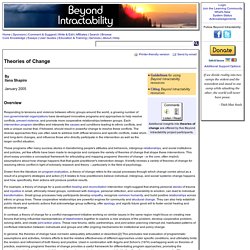 Each intervention program identifies and interprets the causes and conditions leading to ethnic conflicts, and sets a unique course that, if followed, should result in powerful change to resolve these conflicts. The diverse approaches they use often seek to address both diffuse tensions and specific conflicts, make short- and long-term changes, and influence those who directly participate in the intervention as well as the larger conflict situation. Programs often have complex and overlapping assumptions about the causes and effective responses to ethnic conflict, yet a comparison across programs reveals that programs name and frame both the problem and their response in distinct ways.