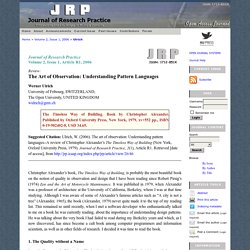 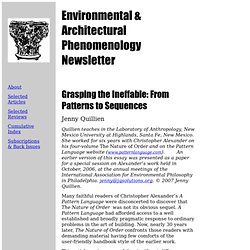 She worked for six years with Christopher Alexander on his four-volume The Nature of Order and on the Pattern Language website (www.patternlanguage.com). An earlier version of this essay was presented as a paper for a special session on Alexander’s work held in October, 2006, at the annual meetings of the International Association for Environmental Philosophy in Philadelphia. Jenny@jqsolutions.org. © 2007 Jenny Quillien. COMMENT SAISIR L’INSAISSIABLE - 0701quillien.pdf. Systems generating systems — architectural design theory by Christopher Alexander (1968) The systems thinking roots from architect Christopher Alexander aren’t completely obvious in his work on pattern language. 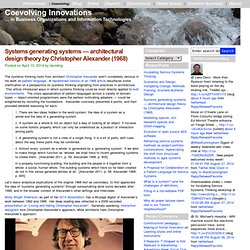 A republished version of an 1968 article resurfaces some clarification on a perspective on systems thinking originating from practices in architecture. This article introduced ways in which systems thinking could be most directly applied to built environments. The cross-appropriation of pattern languages across a variety of domain types — object-oriented programmers were the earliest motivating adopters — could be enlightened by revisiting the foundations. Alexander concisely presented 4 points, and then provided detailed reasoning for each: 1. Let’s leave analytical explications of the original 1968 text as secondary, to first appreciate the idea of “systems generating systems” through sensemaking done some decades after 1968, and in the broader context of Alexander’s other writings and interviews. [....]

Chefs, Not Recipes: The Tyranny of Tools and Best Practices. One of my favorite sayings is, “Chefs, not recipes.” 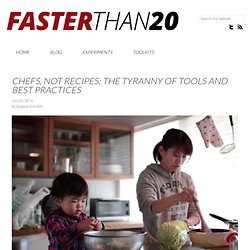 It’s a phrase that I stole from Dave Snowden, and it perfectly encapsulates the approach I think we need to take (and aren’t) in the collaboration, networks, and organizational development space. I believe in this so strongly that I had it engraved on the back of my phone. What exactly does this mean, and why do I find it so important? One of the reasons I got into this field was that, over a dozen years ago, I experienced exceptional collaboration in open source software development communities, and I wondered whether similar things were happing in other places. If they were, I wanted to learn about them. I still believe that a good pattern language would be useful, and there’s been some interesting movement in this direction — particularly Group Works and Liberating Structures. 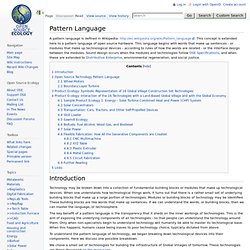 This language begins with words that make up sentences - or modules that meke up technological devices - according to rules of how the words are related - or the interface design between the modules. Sound design occurs when the modules and technologies follow OSE Specifications, and when these are extended to Distributive Enterprise, environmental regeneration, and social justice. Peeragogy Patterns. Although a grounding in learning theory helps inform peer learning projects, Peeragogy, at its core, comes to life in applied practice. 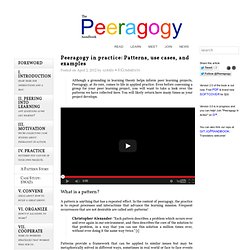 Even before convening a group for your peer learning project, you will want to take a look over the patterns we have collected here. You will likely return here many times as your project develops. What is a pattern? A pattern is anything that has a repeated effect. In the context of peeragogy, the practice is to repeat processes and interactions that advance the learning mission. PatternPedia - Wiki-based Pattern Repository. Watch in HD for best performance. 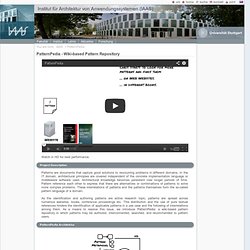 Patterns are documents that capture good solutions to reoccurring problems in different domains. In the IT domain, architectural principles are covered independent of the concrete implementation language or middleware software used. Architectural knowledge becomes persistent over longer periods of time. Pattern reference each other to express that there are alternatives or combinations of patterns to solve more complex problems. Cloud Computing Patterns. Group Works Card Deck – A Joyful Announcement. For the past couple of years a group of professional facilitators and others experienced in and interested in improving “group process” has been working to create a “pattern language” (an integrated collection of practices, processes, qualities and other phenomena that “work” in many different group contexts and at different scales) to improve the effectiveness of meetings, conferences and other deliberative gatherings. 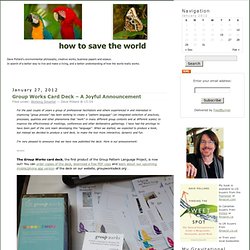 I have had the privilege to have been part of the core team developing this “language”. When we started, we expected to produce a book, but instead we decided to produce a card deck, to make the tool more interactive, dynamic and fun. I’m very pleased to announce that we have now published the deck. Here is our announcement: The Group Works card deck, the first product of the Group Pattern Language Project, is now out!

Image by Susan Stewart. Permaculture Flower Pattern Language by Adam Brock on Prezi. Co-Creative event pattern language. V1.0 Beta Summary As a group of people, it’s easier to join and work together AGAINST something than FOR something.Command and control or consensus work model have limitations for group organization (Marsh, H. 2012).It has to do partly with the difficulty of on agreeing on a common goal and sharing a common intent, particularly in large groups. 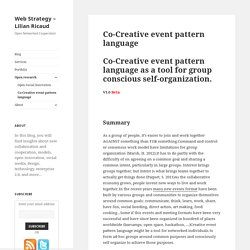 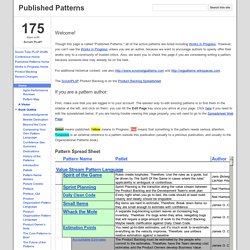 Though this page is called "Published Patterns," all of the active patterns are listed including Works in Progress. However, you can't see the Works in Progress unless you are an author, because we want to encourage authors to openly offer their works only to a community of trusted critics. Also, we want you to check this page if you are considering writing a pattern, because someone else may already be on the task. For additional historical context, see also and The ScrumPLoP Product Backlog is on the Product Backlog Spreadsheet.

If you are a pattern author: First, make sure that you are logged in to your account. Green means published; Yellow means In Progress; Red means that something in the pattern needs serious attention. Pattern Spread Sheet. 21 Card Decks for Creative Problem Solving, Effective Communication & Strategic Foresight. What are some useful playdecks for sparking creativity and innovation? That was this week’s question that went out on twitter, and below are some of your responses. The number of decks out there is large, so I decided to curate this list based on whether there’s a full free version available online, or at the least a nice sample deck to get you started. So below are 21 tools, ranging from general design process principles to cards on game dynamics, facilitation methods, and long-range futures thinking. Under the descriptions, which are excerpted from the playdeck websites, are links to their free downloads.

The presentation at the 58th Annual Meeting of the International Society for the Systems Sciences in Washington DC was recorded, so that interested parties have the option of watching or listening ideas that have developed over the past six months, and reading the slides at their leisure. Here’s the abstract: 2014/01/26 A Proposal for Collaboration on a Pattern Language for Service Systems (Science, Management, Engineering and Design) Through the Dark Mountain: A Harvest of Myths. I spent last week at a Dark Mountain retreat at Schumacher College in Dartington just outside Totnes, UK. Along with the brilliant authors of the Dark Mountain Manifesto, Paul Kingsnorth and Dougald Hine, 16 remarkable artists, an equal number male and female, from 7 countries around the world, and all but three from what I could ascertain much younger than I (age 20-38), explored our shared worldview of the coming collapse of civilization, the myths of our culture and the possibility of creating new stories that might be of better service to us in the challenging decades ahead.

The main building in which we met, Postern House, is pictured above; it was built in 1380. Shaka, When the Walls Fell - Ian Bogost. In one fascinating episode, Star Trek: The Next Generation traced the limits of human communication as we know it—and suggested a new, truer way of talking about the universe. The opening scene of “Darmok,” the second episode of the fifth season of Star Trek: The Next Generation. Will2013a.pdf. Details view: An Open Source Pattern Language (re)generative of Commons.