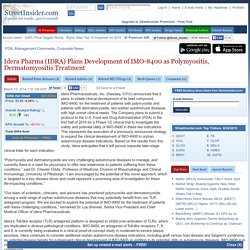 (Nasdaq: IDRA) announced that it plans to initiate clinical development of its lead compound, IMO-8400, for the treatment of patients with polymyositis and patients with dermatomyositis, two orphan autoimmune diseases with high unmet clinical needs. The Company plans to submit a protocol to the U.S. Polymyositis and dermatomyositis affected patients more prone to cardiovascular diseases. Patients suffering from two serious autoimmune disorders which cause muscular inflammation are at increased risk of developing cardiovascular disease, says a group of Montreal researchers. 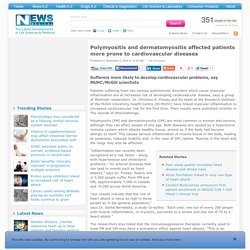 Dr. Christian A. Pineau and his team at the Research Institute of the McGill University Health Centre (RI-MUHC) have linked muscular inflammation to increased cardiovascular risk for the first time. Their results were published recently in The Journal of Rheumatology. Polymyositis (PM) and dermatomyositis (DM) are most common in women and seniors, although they can affect people of any age. Dermatomyositis - A Rare Inflammatory Disease - Natural Health News. What is dermatomyositis? 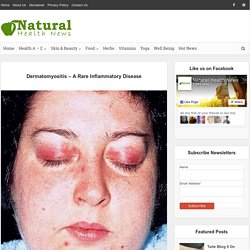 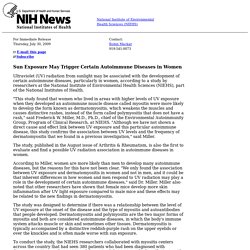 "This study found that women who lived in areas with higher levels of UV exposure when they developed an autoimmune muscle disease called myositis were more likely to develop the form known as dermatomyositis, which weakens the muscles and causes distinctive rashes, instead of the form called polymyositis that does not have a rash," said Frederick W. Miller, M.D., Ph.D., chief of the Environmental Autoimmunity Group, Program of Clinical Research, at NIEHS. The study, published in the August issue of Arthritis & Rheumatism, is also the first to evaluate and find a possible UV radiation association in autoimmune diseases in women. British Journal of Cancer - Abstract of article: Risk of cancer in patients with dermatomyositis or polymyositis, and follow-up implications: a Scottish population-based cohort study. Clinical and epidemiological links with calcinosis in adult dermatomyositis. 1. 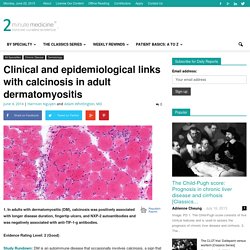 In adults with dermatomyositis (DM), calcinosis was positively associated with longer disease duration, fingertip ulcers, and NXP-2 autoantibodies and was negatively associated with anti-TIF-1-g antibodies. Evidence Rating Level: 2 (Good) Study Rundown: DM is an autoimmune disease that occasionally involves calcinosis, a sign that results from calcium deposition in the skin and subcutaneous tissues. Several candidate autoantibodies have been associated with DM, though their relationship with calcinosis is poorly understood. In this study, the authors retrospectively analyzed DM from one referral center with the objective of identifying features that associate with calcinosis. Click to read the study in JAMA Dermatology Relevant reading: Adult and juvenile dermatomyositis: are the distinct clinical features explained by our current understanding of serological subgroups and pathogenic mechanisms? 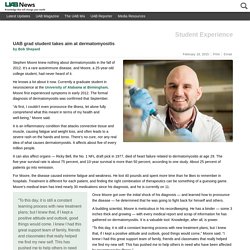 Stephen Moore knew nothing about dermatomyositis in the fall of 2012. It’s a rare autoimmune disease, and Moore, a 25-year-old college student, had never heard of it. He knows a lot about it now. Currently a graduate student in neuroscience at the University of Alabama at Birmingham, Moore first experienced symptoms in early 2012. The formal diagnosis of dermatomyositis was confirmed that September.

“At first, I couldn’t even pronounce the illness, let alone fully comprehend what this meant in terms of my health and well-being,” Moore said. It is an inflammatory condition that attacks connective tissue and muscle, causing fatigue and weight loss, and often leads to a severe rash on the hands and torso. It can also affect organs — Ricky Bell, the No. 1 NFL draft pick in 1977, died of heart failure related to dermatomyositis at age 29. Pre-Clinical Data Shows Huge Potential For Resunab In Treating CF - Corbus Pharmaceuticals Holdings, Inc. (NASDAQ:CRBP) 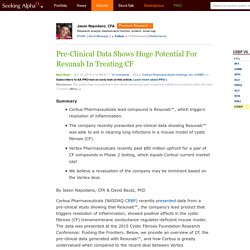 …Background on Cystic Fibrosis… CF is caused by a mutation in the cystic fibrosis transmembrane conductance regulator (CFTR). …Current treatment options for CF… Etanercept shows promise for treating dermatomyositis, study suggests. A multicenter pilot study of etanercept for treatment of dermatomyositis found no major safety concerns and many patients treated with the drug were successfully weaned from steroid therapy. 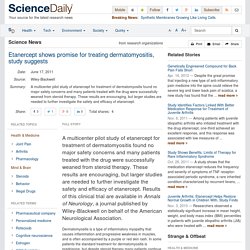 These results are encouraging, but larger studies are needed to further investigate the safety and efficacy of etanercept. Results of this clinical trial are available in Annals of Neurology, a journal published by Wiley-Blackwell on behalf of the American Neurological Association. Dermatomyositis is a type of inflammatory myopathy that causes inflammation and progressive weakness in muscles, and is often accompanied by a purple or red skin rash. Corbus Pharmaceuticals : Bolsters Clinical Development of Resunab with a Phase 2 Trial for the Treatment of Rare Disease Dermatomyositis.