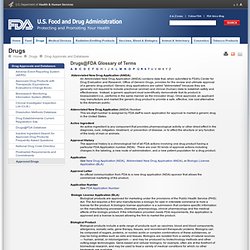 Generic drug applications are called "abbreviated" because they are generally not required to include preclinical (animal) and clinical (human) data to establish safety and effectiveness. Instead, a generic applicant must scientifically demonstrate that its product is bioequivalent (i.e., performs in the same manner as the innovator drug). Once approved, an applicant may manufacture and market the generic drug product to provide a safe, effective, low cost alternative to the American public. 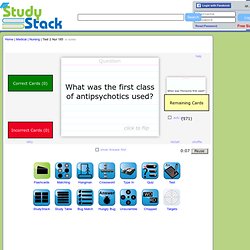 Retry the cards in the incorrect box restart all cards Embed Code - If you would like this activity on your web page, copy the script below and paste it into your web page. Ibuprofen, the painkiller NSAID, its uses and side effects. Previously, we talked about cold and flu, and the differences between them. 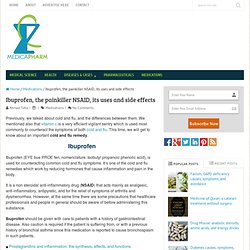 We mentioned also that vitamin c is a very efficient vigilant sentry which is used most commonly to counteract the symptoms of both cold and flu. This time, we will get to know about an important cold and flu remedy. Ibuprofen Ibuprofen (EYE bue PROE fen, nomenclature: Isobutyl propanoic phenolic acid), is used for counteracting common cold and flu symptoms. It’s one of the cold and flu remedies which work by reducing hormones that cause inflammation and pain in the body.

NSAIDs types, uses, contraindications, and their relation to ulcers. In a previous article about prostaglandins, we talked about the formation of PGs. 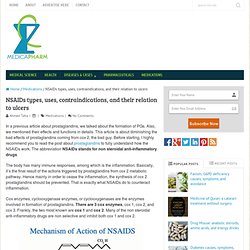 Also, we mentioned their effects and functions in details. This article is about diminishing the bad effects of prostaglandins coming from cox 2, the bad guy. Before starting, I highly recommend you to read the post about prostaglandins to fully understand how the NSAIDs work. The abbreviation NSAIDs stands for non steroidal anti-inflammatory drugs. Diclofenac: one of the powerful NSAIDs commonly used. NSAIDs is the abbreviation that stands for non-steroidal anti-inflammatory drugs. 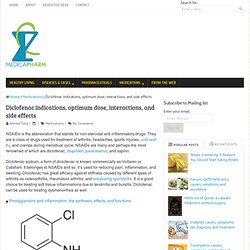 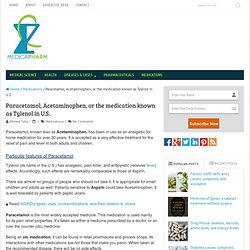 It is accepted as a very effective treatment for the relief of pain and fever in both adults and children. Tylenol (its name in the U.S.) has analgesic, pain killer, and antipyretic (relieves fever) effects. Accordingly, such effects are remarkably comparable to those of Aspirin. There are almost no groups of people who should not take it. Sulfacetamide Sodium ophthalmic: indications, and side effects.

For sure the human eye, as a very sensitive organ, is majorly vulnerable to lots of infections and irritation. 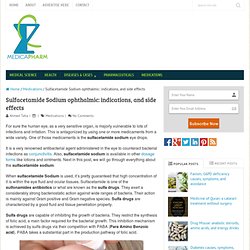 This is antagonized by using one or more medicaments from a wide variety. One of those medicaments is the sulfacetamide sodium eye drops. It is a very renowned antibacterial agent administered in the eye to counteract bacterial infections as conjunctivitis. Cephalexin: everything you need to know about this medication. Cephalexin is included in a group of drugs known as Cephalosporin antibiotics. 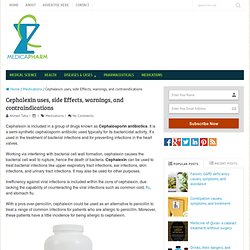 It is a semi-synthetic cephalosporin antibiotic used typically for its bactericidal activity. It’s used in the treatment of bacterial infections and for preventing infections in the heart valves. Working via interfering with bacterial cell wall formation, cephalexin causes the bacterial cell wall to rupture, hence the death of bacteria. Corticosteroids conversion calculator (hydrocortisone, dexamethasone, prednisone, methylprednisolone, betamethasone. Insulin Preparations. Dosage forms: introduction to pharmaceuticals. This article is a sufficient beginning to know everything about pharmaceuticals. 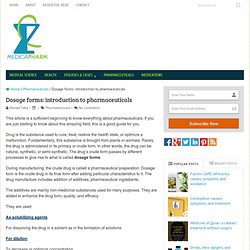 Oral dosage forms advantages, disadvantages, and classification. Caplet dosage form, what is it exactly !! Dosage form of a drug is the mean by which this drug enters the body, reaches the site of action (the target site), and exerts its action. 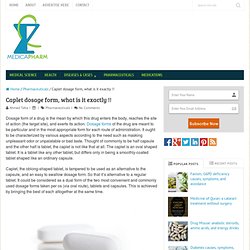 Dosage forms of the drug are meant to be particular and in the most appropriate form for each route of administration. It ought to be characterized by various aspects according to the need such as masking unpleasant odor or unpalatable or bad taste. Thought of commonly to be half capsule and the other half is tablet, the caplet is not like that at all. The caplet is an oval shaped tablet. It is a tablet like any other tablet, but differs only in being a smoothly-coated tablet shaped like an ordinary capsule. Prescribing Skills Assessment (PSA) Prescribing Item Case presentation A 74-year-old man presents to the medical assessment unit complaining of shortness of breath at rest and swollen legs. These symptoms have been gradually increasing over the last 2 weeks. He has been having difficulty sleeping and sat up in a chair all of last night, calling his doctor this morning. PSA Pilot.