Purple Reigns: How to Live a Full Life with Lupus. May is Lupus Awareness Month! 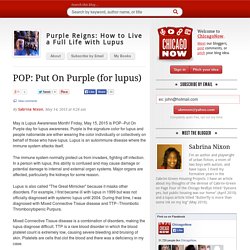 Friday, May 15, 2015 is POP--Put On Purple day for lupus awareness. Purple is the signature color for lupus and people nationwide are either wearing the color individually or collectively on behalf of those who have lupus. Lupus is an autoimmune disease where the immune system attacks itself. The immune system normally protect us from invaders, fighting off infection. Lupus: Defining an invisible disease - Honolulu Health. Lupus has been around for hundreds of years, yet there are lots of people who still don't quite understand exactly what the disease is — And that's OK. 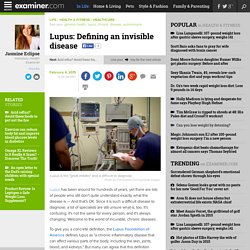 Since it is such a difficult disease to diagnose, a lot of specialists are still unsure what is, too. It's confusing, it's not the same for every person, and it's always changing. Welcome to the world of incurable, chronic diseases. Lupus-infographic_50ad2a08c6377.jpg (1240×3910) Blood Cancer Drug Shows Promise Against Lupus. SUNDAY, June 8 (HealthDay News) — A drug used to treat multiple myeloma, a cancer of the white blood cells, may also be a treatment for the chronic autoimmune disease lupus, German researchers report. 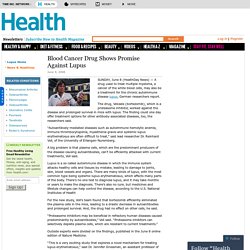 The drug, Velcade (bortezomib), which is a proteasome inhibitor, worked against the disease and prolonged survival in mice with lupus. The finding could one day offer treatment options for other antibody-associated diseases, too, the researchers said. “Autoantibody-mediated diseases such as autoimmune hemolytic anemia, immune thrombocytopenia, myasthenia gravis and systemic lupus erythematosus are often difficult to treat,” said lead researcher Dr. Reinhard Voll, of the University of Erlangen-Nuremberg.

A big problem is that plasma cells, which are the predominant producers of the disease-causing autoantibodies, can’t be efficiently attacked with current treatments, Voll said. Outside experts were divided on the findings, published in the June 8 online edition of Nature Medicine. Race of Patients With Lupus Affects Influenza Vaccine Effectiveness. In a new study, African Americans with systemic lupus erythematosus had a higher antibody response to influenza vaccination than European-American patients. 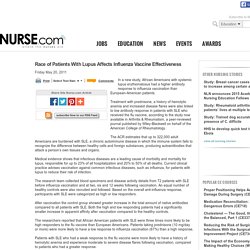 Treatment with prednisone, a history of hemolytic anemia and increased disease flares were also linked to low antibody response in patients with SLE who received the flu vaccine, according to the study now available in Arthritis & Rheumatism, a peer-reviewed journal published by Wiley-Blackwell on behalf of the American College of Rheumatology. The ACR estimates that up to 322,000 adult Americans are burdened with SLE, a chronic autoimmune disease in which the immune system fails to recognize the difference between healthy cells and foreign substances, producing autoantibodies that attack a person’s own tissues and organs.

Medical evidence shows that infectious diseases are a leading cause of morbidity and mortality for lupus, responsible for up to 23% of all hospitalization and 20% to 50% of all deaths. VIDEO: Assessment tool rapidly screens lupus cognition : Family Practice News. ROME – The Montreal Cognitive Assessment provides a quick and easy-to-use screening tool to identify patients with systemic lupus erythematosus with cognitive impairment, Dr. 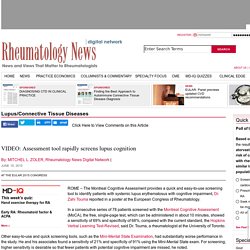 Zahi Touma reported in a poster at the European Congress of Rheumatology. In a consecutive series of 78 patients screened with the Montreal Cognitive Assessment (MoCA), the free, single-page test, which can be administered in about 10 minutes, showed a sensitivity of 69% and specificity of 68%, compared with the current standard, the Hopkins Verbal Learning Test-Revised, said Dr. Touma, a rheumatologist at the University of Toronto. Other easy-to-use and quick screening tools, such as the Mini-Mental State Examination, had substantially worse performance in the study. Ultrasound demonstrates value in assessment, stratification of SLE. According to research presented at the European League Against Rheumatism Annual European Congress of Rheumatology, ultrasound has demonstrated value in the evaluation and stratification of musculoskeletal systemic lupus erythematosus, allowing for the detection of clinically significant synovitis in patients who did not have swollen joints or were classified into British Isles Lupus Assessment Group C. 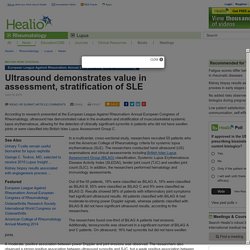 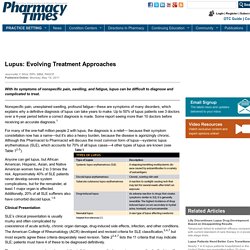 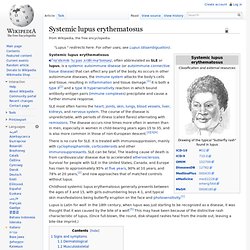 As occurs in other autoimmune diseases, the immune system attacks the body's cells and tissue, resulting in inflammation and tissue damage.[1] It is both a type II[2] and a type III hypersensitivity reaction in which bound antibody-antigen pairs (immune complexes) precipitate and cause a further immune response. There is no cure for SLE. Systemic lupus erythematosus. Systemic lupus erythematosus (SLE or lupus) is a chronic inflammatory autoimmune disease of unknown aetiology that commonly affects women of childbearing age. 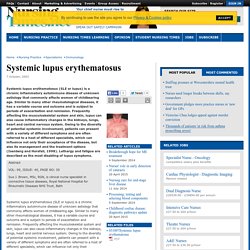 Similar to many other rheumatological diseases, it has a variable course and outcome and is subject to periods of exacerbation and remission. Frequently affecting the musculoskeletal system and skin, lupus can also cause inflammatory changes in the kidneys, lungs, heart and central nervous system. Owing to the diversity of potential systemic involvement, patients can present with a variety of different symptoms and are often referred to a host of different specialists, which can influence not only their acceptance of the disease, but also its management and the treatment options (Isenberg and Horsfall, 1998). Lethargy and fatigue are described as the most disabling of lupus symptoms. Abstract Sue J. Classification The disease is classified as follows: Lupus erythematodes. Clinical Review: Systemic lupus erythematosus. Section 1. 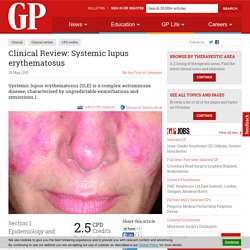 Epidemiology and aetiology Its clinical manifestations range from arthralgia, photosensitivity and the classic malar or 'butterfly' rash to internal organ involvement, most notably renal and CNS disease. SLE is often considered a rare disease, but is actually fairly common, especially in certain ethnic groups. PrevalenceSLE typically affects young women of childbearing age, but all ages can be affected. The overall female:male ratio is 9:1. The female predominance in SLE may indicate that hormonal influences play a part, but the precise role of estrogens is unclear. The prevalence of SLE ranges from 40 to 200 per 100,000 population, varying considerably in different ancestral groups. Vitamin D Tracks Systemic Lupus Erythematosus Activity. Action Points Vitamin D deficiency was common in patients with SLE in an Australian study.Vitamin D levels were inversely associated with disease activity in patients with SLE.

In systemic lupus erythematosus (SLE) low vitamin D status is associated with higher disease activity and erythrocyte sedimentation rate (ESR), while over time, an increase in serum vitamin D levels correlates with reduced SLE activity. These findings were reported in an Australian study -- the first to examine this correlation in the Southern Hemisphere -- published online in Lupus Science and Medicine on April 8, 2015.

Liza Rajasekhar (Nizam’s Institute of Medical Sciences, Hyderabad, India) and study co-authors found that patients who received immunosuppressive therapy in addition to a vasodilator achieved improvements in pulmonary arterial systolic pressure (PASP) that were greater than would be expected with vasodilator treatment alone. The 24 patients in the study were all female and aged an average of 25 years. Thirteen were in New York Heart Association functional classes III or IV, six were in classes I or II and five were asymptomatic. Oral discoid lupus erythematosus: A study of twenty-one cases. Research and Markets: Chronic Cutaneous Lupus Erythematosus (CCLE) / Discoid Lupus Erythematosus (DLE) - Pipeline Review, H1 2013. Unrecognizable Signs: My Struggle with Discoid Lupus. Freshman year of college was a difficult time for me. Many things had changed, I was away from home for the first time, I was not among close friends, and my course load was semi-difficult for me to adjust to.

With all that going on, there was a noticeable change to my appearance that I couldn’t identify with. There was a round reddish raised sore on my left cheek. I tried to recall in my mind if I had done something to myself to cause this, but nothing came to mind. Combing my hair in the mirror also became unnerving, because it had begun to fall out more than that average 100 strands a day. I knew I had been stressing from school and being homesick, but I couldn’t figure out why my skin and scalp were being affected by my stress. As my grandmother examined my face and scalp, she was clueless about my condition. The diagnosis: discoid lupus. I was handed some cream for my face and told my hair would grow back. Almost twenty years passed; my life was moving along. SLE patients with discoid lupus erythematosus at risk for other clinical manifestations. DISCOID LUPUS ERYTHEMATOSUS: AN ANALYSIS OF ITS SYSTEMIC MANIFESTATIONS*

Terms of Use The In the Clinic® slide sets are owned and copyrighted by the American College of Physicians (ACP). All text, graphics, trademarks, and other intellectual property incorporated into the slide sets remain the sole and exclusive property of the ACP. Children born to mothers with antiphospholipid antibodies may have neurologic problems, epilepsy. Children born to mothers with antiphospholipid antibodies appear to be more likely to have neurological manifestations or epilepsy, according to study findings presented at the European League Against Rheumatism Annual European Congress of Rheumatology.