Gearing up with Google Plus

Resources collected and shared to support my presentation of the same name at EdTech Team's Melbourne Summit featuring Google for Education, 22-23 September, 2015.

Gearing Up with Google+ - Google Slides. Get connected with Google+ ‘I Link, Therefore I Am’: Network Literacy as a Core Digital Literacy. Attention, and Other 21st-Century Social Media Literacies. © 2010 Howard Rheingold. 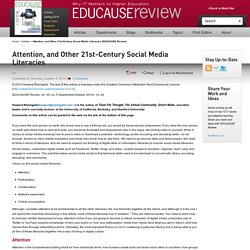 The text of this article is licensed under the Creative Commons Attribution NonCommercial License ( EDUCAUSE Review, vol. 45, no. 5 (September/October 2010): 14–24 Howard Rheingold (howard@rheingold.com) is the author of Tools For Thought, The Virtual Community, Smart Mobs, and other books and is currently lecturer at the University of California, Berkeley, and Stanford University. Comments on this article can be posted to the web via the link at the bottom of this page. If you were the only person on earth who knew how to use a fishing rod, you would be tremendously empowered. Social media—networked digital media such as Facebook, Twitter, blogs, and wikis—enable people to socialize, organize, learn, play, and engage in commerce. I focus on five social media literacies: Attention Participation Collaboration Network awareness Critical consumption Attention Attention is also important in the classroom.

Participation Collaboration Network Awareness. Social Capital and PLNs: Discovering, Building, and Cultivating Networks of Learners. Curation as a tool for teaching and learning (with images) · hbailie. Learn, do, teach... I published my digital essay on Storify on Sunday afternoon and publicised the fact on Twitter and through the subject forums. 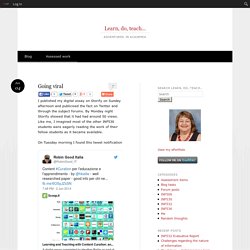 By Monday night Storify showed that it had had around 50 views. Like me, I imagined most of the other INF530 students were eagerly reading the work of their fellow students as it became available. On Tuesday morning I found this tweet notification Wow, Robin Good is like the content curation guru! Somehow he’d come across my essay and posted it onto his Scoop.it page along with a critique. More tweets followed: Bec was prompted to send this tweet: By this stage the number of views of my essay was approaching 2000.

What the Plus! 1987 was the last time Guy wrote a book about a product (The Macintosh Way). 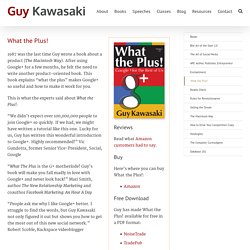 After using Google+ for a few months, he felt the need to write another product-oriented book. This book explains “what the plus” makes Google+ so useful and how to make it work for you. This is what the experts said about What the Plus! : 10 Ways To Get Started Using Google+ In Your Classroom - By Kellie Ady Google+ was enabled for K-12 domains in the fall, and I am now thinking about how Google+ could fit into our district for both students and staff, especially in light of Skype’s recent offer for group video chat for teachers. 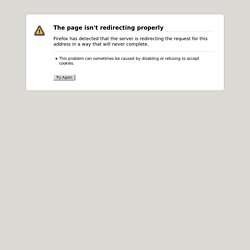 There is something in me (maybe it’s my English teacher background) that prefers the flexibility to share ideas in more than 140 characters. Why build a Personal Learning Network? 'Inside the Black Box’ was written by Black and William in 1998 and in it they describe the classroom as a black box with inputs and outputs but what occurred inside was a mystery. 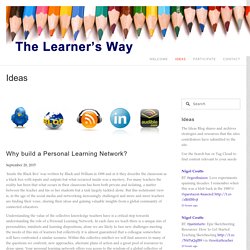 For many teachers the reality has been that what occurs in their classroom has been both private and isolating, a matter between the teacher and his or her students but a task largely tackled alone. But this isolationist view is, in the age of the social media and networking increasingly challenged and more and more teachers are finding their voice, sharing their ideas and gaining valuable insights from a global community of connected educators. Understanding the value of the collective knowledge teachers have is a critical step towards understanding the role of a Personal Learning Network. The flip side of access to this collective knowledge is understanding that you also have valuable knowledge to share.

PWP – Personal Web Presence. I have heard educators say they do not want to be on the Internet. 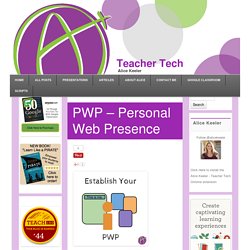 The do not make Facebook accounts, Tweet or do other things to have a presence on the web. We are on the Internet whether we want to be or not. Who do you want to write the story of what people see when they search you, and people ARE searching you. Steve Hargadon and myself have been working on the idea of a PWP – Personal Web Presence.

The Beginner's Guide to Google+ When Google+ entered the social space in 2011, it was met largely with skepticism. 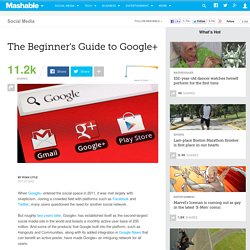 Joining a crowded field with platforms such as Facebook and Twitter, many users questioned the need for another social network. But roughly two years later, Google+ has established itself as the second-largest social media site in the world and boasts a monthly active user base of 235 million. And some of the products that Google built into the platform, such as Hangouts and Communities, along with its added integration in Google News that can benefit an active poster, have made Google+ an intriguing network for all users. If you're a newbie to Google+, these tips will help you get started. How Educators and Schools Can Make the Most of Google Hangouts. What Is a "Hangout? 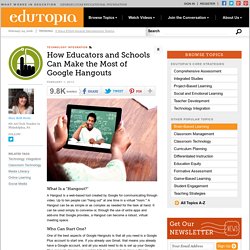 " A Hangout is a web-based tool created by Google for communicating through video. Up to ten people can "hang out" at one time in a virtual "room. " A Hangout can be as simple or as complex as needed for the task at hand. It can be used simply to converse or, through the use of extra apps and add-ons that Google provides, a Hangout can become a robust, virtual meeting space.

8 Ways Teachers and Students Can Use Google+ 31 Ways to Use G+ in Higher Education - Public - Google Slides. Want to connect with other students? Why not use Google Apps? 7 September 2015 Did you know that Monash provides you with access to a wide range of apps including Mail, Calendar, Drive, Google+, Chat and more? 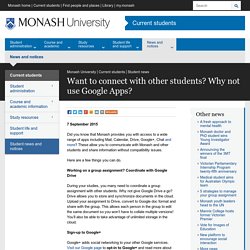 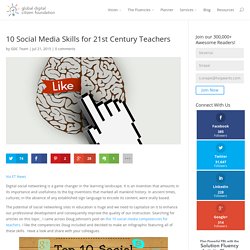 It is an invention that amounts in its importance and usefulness to the big inventions that marked all mankind history. In ancient times, cultures, in the absence of any established sign language to encode its content, were orally based. The potential of social networking sites in education is huge and we need to capitalize on it to enhance our professional development and consequently improve the quality of our instruction. Terrific Tales of Teachers and Twitter in the Classroom. Let’s have an honest discussion about Twitter and teachers. What makes Twitter a tool that teachers would want to use? How Google+ is Rethinking Social Media. You may remember a few years ago when Google+ attempted to compete with Facebook as a social website. Google branded their social initiative as the next big sharing site in which Google.com would finally be personalized.

Their attempt at competition has not yet met expectations. Social Media Explained (As A City) The following post was inspired by Chris Brogan, who wrote yesterday about his current use of social networks. I found his opinions spot-on, and thought I would echo his sentiments with my own observations. Clip art is from Shawnna Rennae Porter. When I first began explaining social media to new users years ago, I often tried to provide an apt comparison to real life. The result was often closer to the reflection in funhouse mirror than a true image, but the comparisons usually helped. Now, of course, there are very few new users of social media. Facebook: The big box superstore It’s nearly impossible to avoid going to Facebook regularly, even if most of what you find on the shelves provides minimal value or purpose.

Twitter: A Saturday farmer’s market What started as a few stalls by the playground has exploded into 30 acres of everything imaginable. Connected Leaders: Engaging School Communities Through Social Media. “We must stop focusing primarily on technology’s dangers, as we currently do. … Many adults think they are extremely clever when they discover something “bad” about the internet … Yes, these exist … [but] let’s move on to something positive we can do with this technology.” – Marc Prensky During this past week, our middle school Facebook page received almost 5,000 views, all based upon our Twitter feed from field trips to Alsace, Normandy and the Loire Valley. Why educators can't live without social media. From student recruitment to alumni relations, social media has a place at every step of the student journey, says Eric Stoller. Institutions and educators ignore it at their peril.

Communication is at the core of the human experience. How we learn, teach and engage is predicated on our ability to communicate with one another, and technology-based services have added layers of complexity, efficiency, innovation, and disruption to how we do this. How we communicate is ever-evolving, especially with the rise of digital services as a primary method of engagement, and social media is one of the most exciting communication channels higher education institutions can use today. Teaching the Teachers, 140 Characters at a Time — Bright. Educators around the world are gathering on Twitter for professional development. What has the network done for your education career? Three Easy Tips for Teachers on Twitter — Bright. Being a Connected Educator: Face to Face. Being a connected educator means connecting with other teachers to exchange ideas, improve your teaching practice, and in turn, make a change in education. How Students Benefit From Social Media.

A Good Twitter Visual Guide in Dr. Seuss Style. November 1, 2014 How about a Twitter guide in Dr. Thing One: Twitter – Learn, do, teach...too. How is “Connected” Connected? How to Connect With Other Teachers in the Social Age. Learning professionally with Google+ Communities. Personal Learning Networks for Educators: 10 Tips - Getting Smart by Guest Author - edchat, EdTech, PLN. By Dr. Mark Wagner. Sharing: A Responsibility of the Modern Educator. In a past post blog I discussed the idea that every educator has a story and that they should share those stories: Top Tips for Using Social Media to Expand Your PLN. Should Every Teacher in the World Really be on Twitter? The Best Free Resources for Perfecting Your PLN. Heather Bailie on Pinterest.

Ten Step Program to Being Connected; or Getting Connected for Dummies. Communicate and Collaborate Through Social Bookmarking. TeachMeetMelbourne - home.