Is someone watching you online? The security risks of the Internet of Things. The range and number of “things” connected to the internet is truly astounding, including security cameras, ovens, alarm systems, baby monitors and cars. 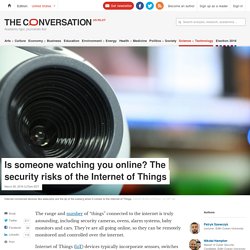 They’re are all going online, so they can be remotely monitored and controlled over the internet. Internet of Things (IoT) devices typically incorporate sensors, switches and logging capabilities that collect and transmit data across the internet. Some devices may be used for monitoring, using the internet to provide real-time status updates. Devices like air conditioners or door locks allow you to interact and control them remotely. Most people have a limited understanding of the security and privacy implications of IoT devices. At the heart of all IoT devices is the embedded firmware. Our previous research on internet device firmware demonstrated that even the largest manufacturers of broadband routers frequently used insecure and vulnerable firmware components. IoT risks are compounded by their highly connected and accessible nature. The IT approach to education leaves pupils over-protected. It’s almost a theological battle – the digital guys versus the IT people. 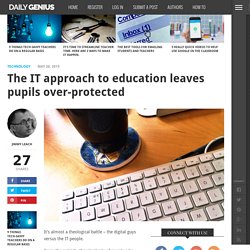 From the outside, there’s plenty of people who assume that IT and digital are the same thing – both a bit nerdy, both spend a lot of time on computers. But there is a fundamental difference between them, and it’s one which determines the nature of how your school uses EdTech, and that, in turn, helps decide how pupils are equipped for using digital tools in their school work and, later, their professional lives. To put it (over) simplistically – the IT people like a project; the digital people prefer constant change.

The two don’t have to be wholly incompatible, but its an approach which can cause a clash. Should you stalk your child's smartphone? Teens and texting - what do parents need to know? 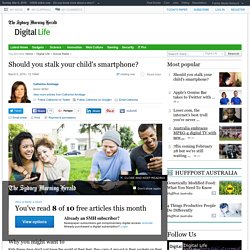 Photo: iStock With smartphones, handhelds and wi-fi hotspots everywhere, keeping an eye over your child's shoulder on the home computer is so last century. Instead surveillance apps let you track your child's every text, phone call, photo and web site visit, without them knowing. But should you? Why you might want to Kids these days don't just have the world at their feet, they carry it around in their pockets on their smartphones. A survey found half of teenagers have sexted sexually explicit images of themselves. What are your digital rights? Digital rights are basically human rights in the internet era. 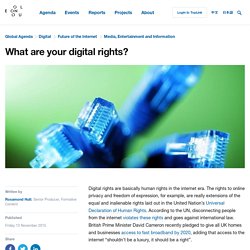 The rights to online privacy and freedom of expression, for example, are really extensions of the equal and inalienable rights laid out in the United Nation’s Universal Declaration of Human Rights. According to the UN, disconnecting people from the internet violates these rights and goes against international law. British Prime Minister David Cameron recently pledged to give all UK homes and businesses access to fast broadband by 2020, adding that access to the internet “shouldn’t be a luxury, it should be a right”. Why do digital rights matter? As we increasingly conduct our lives online – shopping, socializing and sharing information – our digital rights, particularly the rights to privacy and freedom of expression, are becoming more important.

Should I Trust The Cloud? I received an email recently from a colleague asking about data sovereignty, and in particular asking about how schools deal with the need to store all personal data on Australian servers to be compliant with the law. 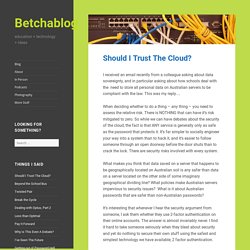 This was my reply… When deciding whether to do a thing – any thing – you need to assess the relative risk. CNETs guide to keeping your information private online. Much of modern life is now spent online and in the cloud. 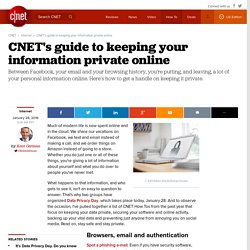 We share our vacations on Facebook, we text and email instead of making a call, and we order things on Amazon instead of going to a store. DinoPass - Simple password generator for kids. 7 Password Mistakes That Will Likely Get You Hacked. You’ve heard it all before and you’re probably sick of it. 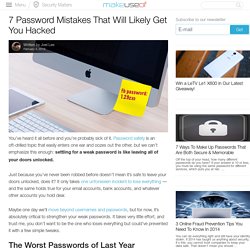 Password safety is an oft-drilled topic that easily enters one ear and oozes out the other, but we can’t emphasize this enough: settling for a weak password is like leaving all of your doors unlocked. Just because you’ve never been robbed before doesn’t mean it’s safe to leave your doors unlocked, does it? It only takes one unforeseen incident to lose everything — and the same holds true for your email accounts, bank accounts, and whatever other accounts you hold dear. 6 Tips For Creating An Unbreakable Password That You Can Remember. You can lock every door and window of your house, but if you use a skeleton key the odds are pretty good someone is probably going to end up robbing you blind. 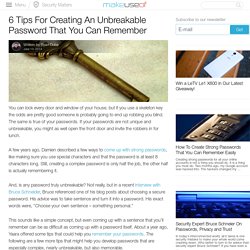 The same is true of your passwords. If your passwords are not unique and unbreakable, you might as well open the front door and invite the robbers in for lunch. A few years ago, Damien described a few ways to come up with strong passwords, like making sure you use special characters and that the password is at least 8 characters long. Still, creating a complex password is only half the job, the other half is actually remembering it.

How to Generate Strong Passwords That Match Your Personality. A secure password is one of the most important parts of keeping yourself safe while browsing the web. 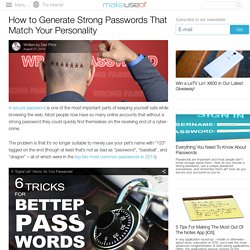 Most people now have so many online accounts that without a strong password they could quickly find themselves on the receiving end of a cyber-crime.