UCC-Lien-Perfection-and-Priority-Scott-Helbing. TRANSMITTING UTILITY. TRANSMITTING UTILITY is defined as: A transmitting utility agent, utilized for the purpose of transmitting commercial activity for the benefit of the Grantor / Secured Party, an exclusive agent, with universal agency, a public agent, serving as a conduit for the transmission of goods and services in Commercial Activity, a thing to interact, contract, and exchange goods, services, obligations, and liabilities in Commerce with other Debtors/ grantees, corporations, and artificial persons. 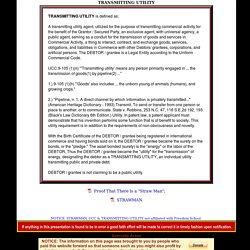 The DEBTOR / grantee is a Legal Entity according to the Uniform Commercial Code. UCC 9-105 (1)(n) "'Transmitting utility' means any person primarily engaged in ... the transmission of goods(1) by pipeline(2) ... " 1.) 9-105 (1)(h) "'Goods' also includes ... the unborn young of animals (humans), and growing crops. " 2.) Www.thctrust.org/attachments/article/145/February 1, 2013 - Notice of Tender and Note.pdf. UCC-1 financing statement. A UCC-1 financing statement (an abbreviation for Uniform Commercial Code-1) is a legal form that a creditor files to give notice that it has or may have an interest in the personal property of a debtor (a person who owes a debt to the creditor as typically specified in the agreement creating the debt).[1] This form is filed in order to "perfect" a creditor's security interest by giving public notice that there is a right to take possession of and sell certain assets for repayment of a specific debt with a certain priority. 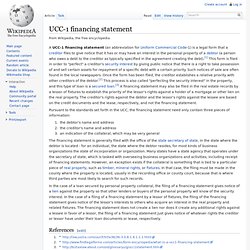 Such notices of sale are often found in the local newspapers. Pursuant to the standards set forth in the UCC, the financing statement need only contain three pieces of information: the debtor's name and addressthe creditor's name and addressan indication of the collateral, which may be very general. 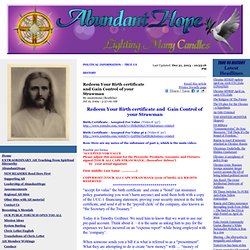 Products, Accounts, and Fixtures.signed (YOUR ALL CAPS STRAWMAN)C, (hereafter ‘debtor’) by your actual signature First-middle: Last Name …………….) Registered offices of the BIS. SECUR PARTY STATUS SAVED WOMAN FROM JAIL!!!, victory in court when faced with jail time using her secure party creditor package For more information on how. Maritime "secret lien" Admiralty Law on land. Maritime liens are ancient encumbrances on vessels under Admiralty Law to enforce the payment of debts. 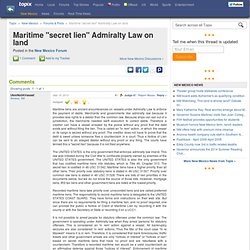 Merchants and governments like admiralty law because it provides less rights to a debtor than the common law. Because ships can sail out of a jurisdiction, the merchants needed swift execution to collect debts. Therefore a creditor can have a vessel arrested by the police without any proof that the debt exists and without filing the lien. This is called an "in rem" action, in which the vessel or its cargo is seized without any proof. The creditor does not have to prove that the debt is owed unless someone files a counterclaim in a court.

The UNITED STATES is the only government that enforces admiralty law inland. Recorded maritime liens take priority over unrecorded liens and are called preferred maritime liens. It is not possible to arrest people for statutory offenses under the common law. The controlling court case that defines the priority of liens is: UNITED STATES v. SECUR PARTY STATUS SAVED WOMAN FROM JAIL!!!, victory in court when faced with jail time using her secure party creditor package For more information on how. Sovereignty Education and Defense Ministry (SEDM) BUSINESS AND COMMERCE CODE CHAPTER 9. SECURED TRANSACTIONS. Sec. 9.101. 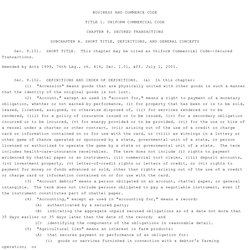 SHORT TITLE. This chapter may be cited as Uniform Commercial Code--Secured Transactions. Amended by Acts 1999, 76th Leg., ch. 414, Sec. 1.01, eff. July 1, 2001. Sec. 9.102. Redemption in Law - UCC. Proof that Marks charges were dismissed. UCC-1 Financing Statement. The UCC-1 Financing Statement is a form filed with the Secretary of State establishing a record of a security agreement between a debtor and a secured party. 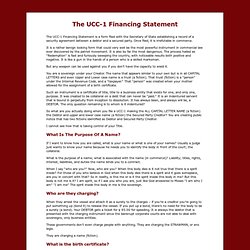 Once filed, it is irrefutable in commerce. It is a rather benign looking form that could very well be the most powerful instrument in commercial law ever discovered by the patriot movement. It is also by far the most dangerous. The process hailed as "Redemption" is fast and furiously sweeping the country, with noticeable results both positive and negative. It is like a gun in the hands of a person who is a skilled marksman. But any weapon can be used against you if you don’t have the capacity to wield it.

You are a sovereign under your Creator. Such an instrument is a certificate of title, title to a business entity that exists for one, and only one, purpose. Ucc Lien on Car Success!!!!