Language change. Online Etymology Dictionary. 'I’m going to get cancer and there’s nothing I can do about it' We’ve all heard it. 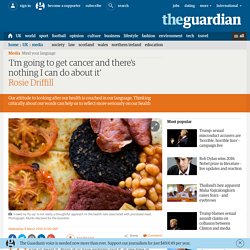 Many of us have probably said it, at one time or another. In the wake of the latest report that links an aspect of our lifestyle to disease, sweaty hands grip the steering wheel, cheeks are puffed – blowfish style – and the oft-lamented conviction that “everything bloody gives you cancer, these days” is spat across the dashboard. Regional dialects are dying out – it’s enough to get you blarting. Never mind whether you take it with jam or cream, does your “scone” rhyme with “gone” or “stone”? 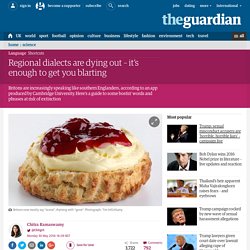 Chances are, it’s the former. Basically the “stone” pronunciation of scone is almost gone. Still with me? According to the first set of results from an app mapping changes in English dialects launched in January by the University of Cambridge, regional accents are dying out. The English Dialects app, downloaded 70,000 times already, has generated data from 30,000 users across 4,000 locations. By'eck, accents are thriving: Regional dialects are getting stronger as people aim to retain a sense of identity. Experts originally predicted local dialects would die out in the last half century with the rise of social mobilityBut researchers at Aston University have found the opposite is true By Eleanor Harding for the Daily Mail Published: 01:21 GMT, 8 November 2012 | Updated: 08:07 GMT, 8 November 2012 For centuries, they been a source of national pride – as well as some good-humoured merriment. 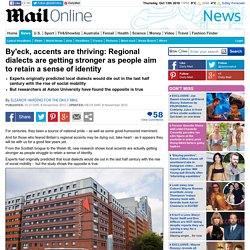 And for those who feared Britain’s regional accents may be dying out, take heart - as it appears they will be with us for a good few years yet. From the Scottish brogue to the Welsh lilt, new research shows local accents are actually getting stronger as people struggle to retain a sense of identity. Wait … is that a rule? Ten everyday grammar mistakes you might be making. 1. 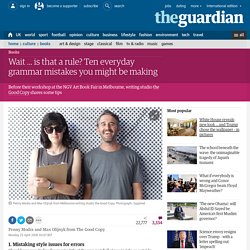 Mistaking style issues for errors Should you use italics for movie titles? Steven Pinker: 10 'grammar rules' it's OK to break (sometimes) Among the many challenges of writing is dealing with rules of correct usage: whether to worry about split infinitives, fused participles, and the meanings of words such as "fortuitous", "decimate" and "comprise". 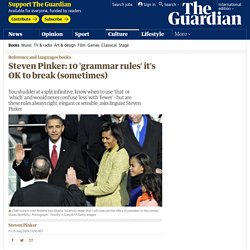 Supposedly a writer has to choose between two radically different approaches to these rules. Prescriptivists prescribe how language ought to be used. They uphold standards of excellence and a respect for the best of our civilisation, and are a bulwark against relativism, vulgar populism and the dumbing down of literate culture. Descriptivists describe how language actually is used. They believe that the rules of correct usage are nothing more than the secret handshake of the ruling class, designed to keep the masses in their place. Options for gender on certain forms. 'No basis' to News Corp story that gender-neutral language enforced at girls' school. Teachers at Cheltenham Girls high school in Sydney were never told they should avoid referring to students as “girls”, “women” or “ladies”, despite claims in the Daily Telegraph on Wednesday that they had been asked to use gender-neutral language. 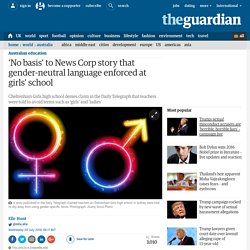 The front page story by Miranda Devine claimed the request to use gender-neutral language at the all-girls school in north-west Sydney was made at a staff meeting to discuss the implementation of the Safe Schools program earlier this year. According to the story, titled “School bans girls”, teachers were told “that if they did not support decisions of LGBTI students they would be breaking the law, would be considered homophobic and were not welcome by the school”. Eight words that reveal the sexism at the heart of the English language. Linguists call it collocation: the likelihood of two words occurring together. 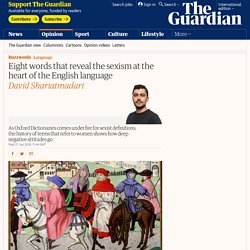 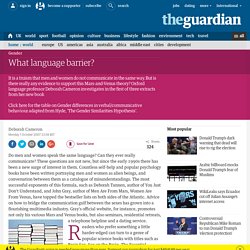 Can they ever really communicate? These questions are not new, but since the early 1990s there has been a new surge of interest in them. Countless self-help and popular psychology books have been written portraying men and women as alien beings, and conversation between them as a catalogue of misunderstandings. The most successful exponents of this formula, such as Deborah Tannen, author of You Just Don't Understand, and John Gray, author of Men Are From Mars, Women Are From Venus, have topped the bestseller lists on both sides of the Atlantic.

Advice on how to bridge the communication gulf between the sexes has grown into a flourishing multimedia industry. A guide to transgender terms. Image copyright Getty Images Caitlyn Jenner, formerly known as 1970s Olympic athlete Bruce Jenner, has announced she is transgender, appearing on the cover of Vanity Fair magazine. 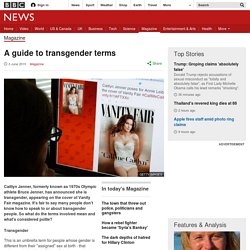 It's fair to say many people don't know how to speak to or about transgender people. So what do the terms involved mean and what's considered polite? Transgender. Beyond 'he' and 'she': The rise of non-binary pronouns. Image copyright Kit Wilson In the English language, the word "he" is used to refer to males and "she" to refer to females. 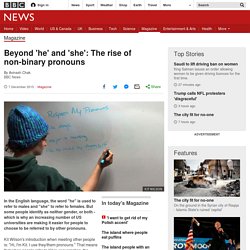 But some people identify as neither gender, or both - which is why an increasing number of US universities are making it easier for people to choose to be referred to by other pronouns.