To do this Polti analyzed classical Greek texts, plus classical and contemporaneous French works. He also analyzed a handful of non-French authors. In his introduction, Polti claims to be continuing the work of Carlo Gozzi, who also identified 36 situations. Publication history[edit] “Gozzi maintained that there can be but thirty-six tragic situations. This list was published in a book of the same name, which contains extended explanations and examples. The list is popularized as an aid for writers, but it is also used by dramatists, storytellers and many others. The 36 situations[edit] Each situation is stated, then followed by the necessary elements for each situation and a brief description. See also[edit] References[edit] External links[edit]

The Thirty-Six Dramatic Situations. 25 Story Starters for Writing Fiction. Posted by Melissa Donovan on September 17, 2015 · Get creative with these story starters. 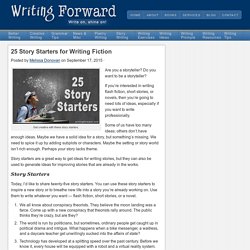 Are you a storyteller? Do you want to be a storyteller? If you’re interested in writing flash fiction, short stories, or novels, then you’re going to need lots of ideas, especially if you want to write professionally. Some of us have too many ideas; others don’t have enough ideas. Story starters are a great way to get ideas for writing stories, but they can also be used to generate ideas for improving stories that are already in the works. Today, I’d like to share twenty-five story starters. We all know about conspiracy theorists. Have you ever used story starters or writing prompts? 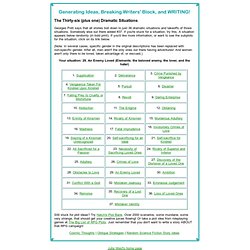 Somebody else out there added #37. If you're stuck for a situation, try this. A situation appears below randomly (in bold print). If you'd like more information, or want to see the subplots for the situation, click on its link below. (Note: In several cases, specific gender in the original descriptions has been replaced with non-specific gender. Your situation: 29. Still stuck for plot ideas? Cosmic Thoughts | Oblique Strategies | Random Science Fiction Story Ideas. CALLIHOO Writing Idea Generators: The 37 Dramatic Situations. 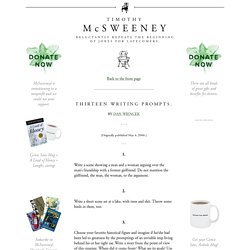 Write a scene showing a man and a woman arguing over the man’s friendship with a former girlfriend. Do not mention the girlfriend, the man, the woman, or the argument. Write a short scene set at a lake, with trees and shit. Throw some birds in there, too. Choose your favorite historical figure and imagine if he/she had been led to greatness by the promptings of an invisible imp living behind his or her right ear.

Write a story that ends with the following sentence: Debra brushed the sand from her blouse, took a last, wistful look at the now putrefying horse, and stepped into the hot-air balloon. A wasp called the tarantula hawk reproduces by paralyzing tarantulas and laying its eggs into their bodies. Imagine if your favorite character from 19th-century fiction had been born without thumbs. Creative Writing Prompts for Sci-Fi &Fantasy... Posted by Melissa Donovan on April 5, 2013 · Fantastical creative writing prompts. 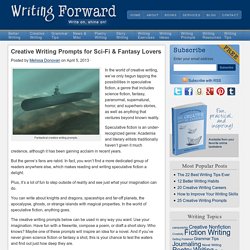 In the world of creative writing, we’ve only begun tapping the possibilities in speculative fiction, a genre that includes science fiction, fantasy, paranormal, supernatural, horror, and superhero stories, as well as anything that ventures beyond known reality. Speculative fiction is an under-recognized genre: Academia and literary elitists traditionally haven’t given it much credence, although it has been gaining acclaim in recent years.

But the genre’s fans are rabid. In fact, you won’t find a more dedicated group of readers anywhere else, which makes reading and writing speculative fiction a delight. Plus, it’s a lot of fun to step outside of reality and see just what your imagination can do. You can write about knights and dragons, spaceships and far-off planets, the apocalypse, ghosts, or strange islands with magical properties. The creative writing prompts below can be used in any way you want. How to Plot and Write a Novel: Plan Your Novel Writing with the Snowflake Method. Many novelists mull over story ideas, letting them ripen and develop over time. 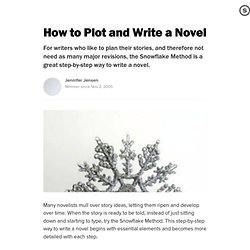 When the story is ready to be told, instead of just sitting down and starting to type, try the Snowflake Method. This step-by-step way to write a novel begins with essential elements and becomes more detailed with each step. Essential Elements for Novel Structure Snowflakes have a structure which begins with a simple form and adds more elements to create complex patterns. Novelist and physicist Randy Ingermanson created the Snowflake Method to break novel-writing into steps that build on each other in the same way.