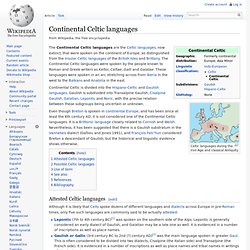 The Continental Celtic languages were spoken by the people known to Roman and Greek writers as Keltoi, Celtae, Galli and Galatae. These languages were spoken in an arc stretching across from Iberia in the west to the Balkans and Anatolia in the east. Continental Celtic is divided into the Hispano-Celtic and Gaulish languages. Gaulish is subdivided into Transalpine Gaulish, Cisalpine Gaulish, Galatian, Lepontic and Noric, with the precise relation between these subgroups being uncertain or unknown. Lusitanian language. Lusitanian (so named after the Lusitani or Lusitanians) was a Paleohispanic language that apparently belonged to the Indo-European family. 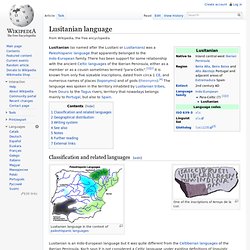 There has been support for some relationship with the ancient Celtic languages of the Iberian Peninsula, either as a member or as a cousin sometimes termed "para-Celtic".[1][2] It is known from only five sizeable inscriptions, dated from circa 1 CE, and numerous names of places (toponyms) and of gods (theonyms).[4] The language was spoken in the territory inhabited by Lusitanian tribes, from Douro to the Tagus rivers, territory that nowadays belongs mainly to Portugal, but also to Spain. Classification and related languages[edit] One of the inscriptions of Arroyo de la Luz. Lusitanian is an Indo-European language but it was quite different from the Celtiberian languages of the Iberian Peninsula. 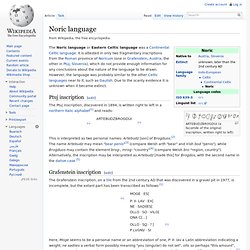 It is attested in only two fragmentary inscriptions from the Roman province of Noricum (one in Grafenstein, Austria, the other in Ptuj, Slovenia), which do not provide enough information for any conclusions about the nature of the language to be drawn. However, the language was probably similar to the other Celtic languages near to it, such as Gaulish. Due to the scanty evidence it is unknown when it became extinct. Ptuj inscription[edit] ARTEBUDZBROGDUI (a facsimile of the original inscription, written right to left) The Ptuj inscription, discovered in 1894, is written right to left in a northern Italic alphabet[1] and reads: Gaulish language. Gaulish is an extinct Celtic language that was spoken in parts of France,[1] Germany, Austria, Hungary, and the Swiss Rhine area as late as the Roman period. [2] It is also considered to be epigraphically attested in Belgium and Northern Italy.[3] Gaulish was supplanted by Vulgar Latin and various Germanic languages from around the 5th century AD onwards. 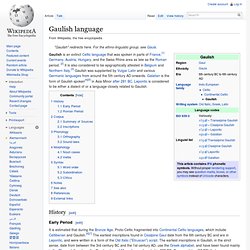 Galatian is the form of Gaulish spoken[4][5] in Asia Minor after 281 BC. Lepontic is considered to be either a dialect of or a language closely related to Gaulish. History[edit] Early Period[edit] It is estimated that during the Bronze Age, Proto-Celtic fragmented into Continental Celtic languages, which include Celtiberian and Gaulish.[6][7] The earliest inscriptions found in Cisalpine Gaul date from the 6th century BC and are in Lepontic, and were written in a form of the Old Italic ("Etruscan") script. Roman Period[edit] The existence of Gaulish is attested in modern German Switzerland in the 5th century AD. Galatian language. Vocabulary[edit] Of the language only a few glosses and brief comments in classical writers and scattered names on inscriptions survive. 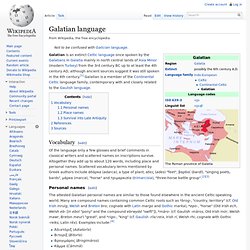 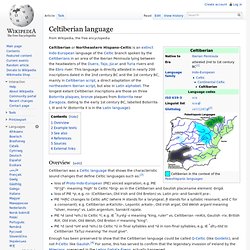 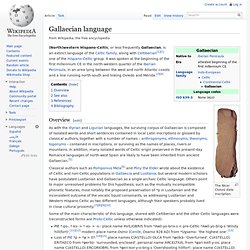