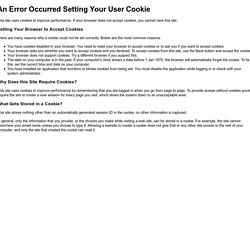 If your browser does not accept cookies, you cannot view this site. Setting Your Browser to Accept Cookies There are many reasons why a cookie could not be set correctly. Below are the most common reasons: You have cookies disabled in your browser. Why Does this Site Require Cookies? This site uses cookies to improve performance by remembering that you are logged in when you go from page to page. Computer mediated imaginative storytelling in children with autism. Division of Psychology, Nottingham Trent University, Burton Street, Nottingham NG1 4BU, United Kingdom Received 2 November 2010, Revised 28 September 2011, Accepted 10 October 2011, Available online 25 October 2011. 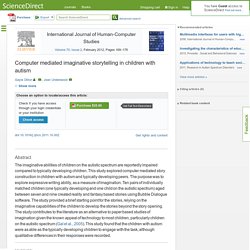 Constructing fictional stories: A study of story narratives by children with autistic spectrum disorder. Institute of Education, University of London, United Kingdom Received 9 March 2014, Revised 7 June 2014, Accepted 12 June 2014, Available online 28 June 2014 Choose an option to locate/access this article: Check if you have access through your login credentials or your institution Check access doi:10.1016/j.ridd.2014.06.015 Get rights and content Highlights Narrative is an important tool for communication and academic achievement. 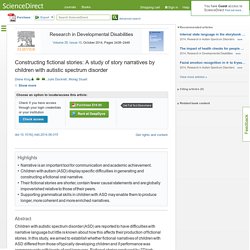 Children with autism (ASD) display specific difficulties in generating and constructing a fictional oral narrative. Their fictional stories are shorter, contain fewer causal statements and are globally impoverished relative to those of their peers. Supporting grammatical skills in children with ASD may enable them to produce longer, more coherent and more enriched narratives. Abstract. Journal Impact Factor Shapes Scientists’ Reward Signal in the Prospect of Publication. Abstract The incentive structure of a scientist’s life is increasingly mimicking economic principles. 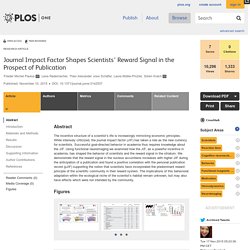 While intensely criticized, the journal impact factor (JIF) has taken a role as the new currency for scientists. Successful goal-directed behavior in academia thus requires knowledge about the JIF. Using functional neuroimaging we examined how the JIF, as a powerful incentive in academia, has shaped the behavior of scientists and the reward signal in the striatum. We demonstrate that the reward signal in the nucleus accumbens increases with higher JIF during the anticipation of a publication and found a positive correlation with the personal publication record (pJIF) supporting the notion that scientists have incorporated the predominant reward principle of the scientific community in their reward system. Metaphor and Emotion: Language, Culture, and Body in Human Feeling - Zoltán Kövecses. Should Literature Be Useful? Two recent studies have concluded that serious literary fiction makes people more empathetic, and humanists everywhere are clinking glasses in celebration. 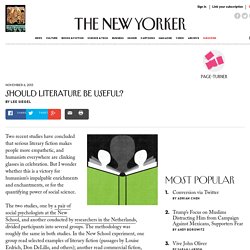 But I wonder whether this is a victory for humanism’s impalpable enrichments and enchantments, or for the quantifying power of social science. The two studies, one by a pair of social psychologists at the New School, and another conducted by researchers in the Netherlands, divided participants into several groups. The methodology was roughly the same in both studies.

In the New School experiment, one group read selected examples of literary fiction (passages by Louise Erdrich, Don DeLillo, and others); another read commercial fiction, and another was given serious non-fiction or nothing at all. The subjects were asked either to describe their emotional states, or instructed, among other tests, to look at photographs of people’s eyes and try to derive from these pictures what the people were feeling when the photographs were taken. Meta-Neuroscience: Studying the Brains of Neuroscientists - Neuroskeptic. How do neuroscientists’ brains work? 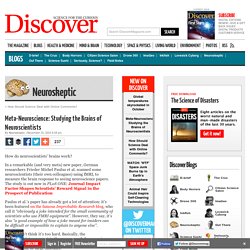 In a remarkable (and very meta) new paper, German researchers Frieder Michel Paulus et al. scanned some neuroscientists (their own colleagues) using fMRI, to measure the brain response to seeing neuroscience papers. The study is out now in PLoS ONE: Journal Impact Factor Shapes Scientists’ Reward Signal in the Prospect of Publication Paulus et al.’s paper has already got a lot of attention: it’s been featured on the famous Improbable Research blog, who call it “obviously a joke intended for the small community of scientists who use FMRI equipment”. It's All In Your Head: Director Pete Docter Gets Emotional In 'Inside Out'

This is FRESH AIR. 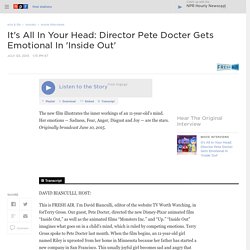 I’m David Bianculli, editor of the website TV Worth Watching, in forTerry Gross. Our guest, Pete Docter, directed the new Disney-Pixar animated film “Inside Out,” as well as the animated films “Monsters Inc.” and “Up.” “Inside Out” imagines what goes on in a child's mind, which is ruled by competing emotions. Why The Key Character In 'Inside Out' Is The One Who Isn't There : Monkey See. Riley is on her own in Inside Out. 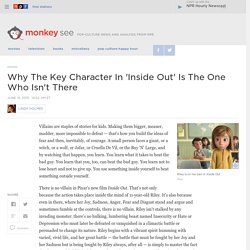 Pixar hide caption itoggle caption Pixar Riley is on her own in Inside Out. Pixar Villains are staples of stories for kids. Interview: Actress Amy Poehler And Director Pete Docter On 'Inside Out' "[Sadness is] such a funny opposite energy to Joy, who is literally jumping up and down," Poehler says. 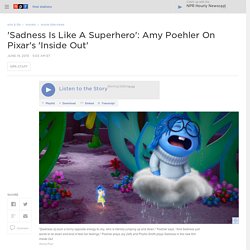 "And Sadness just wants to lie down and kind of feel her feelings. " Poehler plays Joy (left) and Phyllis Smith plays Sadness in the new film Inside Out. Disney/Pixar hide caption itoggle caption Disney/Pixar.