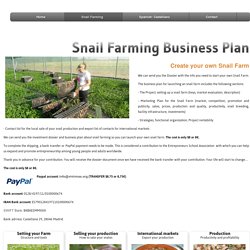 The business plan for launching an snail farm includes the following sections: - The Project: setting up a snail farm (keys, market evaluation, description) International markets. Today, the custom of eating snails has been kept alive, in addition to France or Spain, in countries such as Belgium and Italy, where the consumption of this unique land mollusk has required the importation from other producing countries such as Argentina, Chile and Peru, especially in those where although its consumption is somewhat sporadic in luxury hotels and restaurants, its present in their fields regularly and in large numbers. 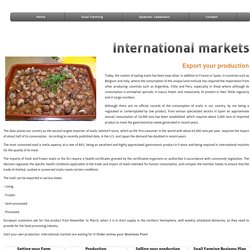 Although there are no official records of the consumption of snails in our country, by not being a regulated or contemplated by law product, from various specialized sectors in Spain an approximate annual consumption of 14,000 tons has been established, which requires about 5,000 tons of imported product to meet the gastronomical needs generated in recent years. The imports of fresh and frozen snails to the EU require a health certificates granted by the certificated organisms or authorities in accordance with community legislation. . - Living. - Frozen. Terroir: le pré aux colimaçons (Alsace) Snail Farming. A great business opportunity for everyone. Here we present a great opportunity for everyone: the Snail farming. 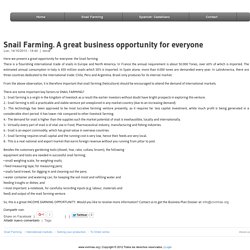 There is a flourishing international trade of snails in Europe and North America. In France the annual requirement is about 50.000 Tones, over 60% of which is imported. The estimated annual consumption in Italy is 450 million snails which 50% is imported. In Spain alone, more than 4.000 tones are demanded every year. In LatinAmerica, there are three countries dedicated to the international trade: Chile, Peru and Argentina. From the above observation, it is therefore important that snail farming (heliculture) should be encouraged to attend the demand of international markets. There are some important key factors to SNAIL FARMING? 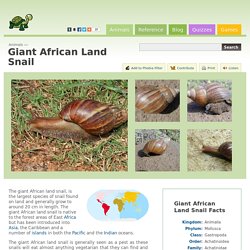 The giant African land snail is native to the forest areas of East Africa but has been introduced into Asia, the Caribbean and a number of islands in both the Pacific and the Indian oceans. The giant African land snail is generally seen as a pest as these snails will eat almost anything vegetarian that they can find and have proven to be quite destructive when around crops and wild flowers. Giant African land snails are also known to carry parasites and are illegal to keep as pets in some countries such as the USA. The giant African land snail is native to humid, forest areas but can today be found in agricultural areas, coast land, natural forest, planted forests, shrublands, urban areas, and wetlands. Extraction de la bave d'escargot pour fabrication de creme anti rides. Snail farming European Commission english version. Training and information for snail farming. Austria's only snail farmer. In a dark barn on a farm on the outskirts of Vienna, Andreas Gugumuck is preparing the "love room" for the multiple guests that come to stay. 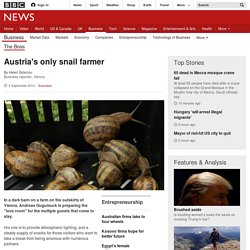 His role is to provide atmospheric lighting, and a steady supply of snacks for those visitors who want to take a break from being amorous with numerous partners. Yet Mr Gugumuck isn't running some sort of guest house of disrepute; he is in fact breeding snails. The 40-year-old is Austria's only full-time professional snail farmer, producing 300,000 per year for human consumption. With 1kg of snail meat selling for up to 80 euros ($105; £63) it is a lucrative business. Mr Gugumuck sells up to 1.5 tonnes of snails per year to restaurants across Austria, and via exports, predominantly to Germany and the US. And he recently flexed his entrepreneurial muscles by diversifying into selling snail caviar - yes, snail eggs - and snail livers. He says it is a significantly more enjoyable job than his previous life working in IT. Historic Austrian food. Snail farming in Lebanon, an emerging alternative and a very profitable industry.

Snail farming is a 44-year old global industry unlike in Lebanon where it emerged only two years ago but yet proved to be a promising sector. 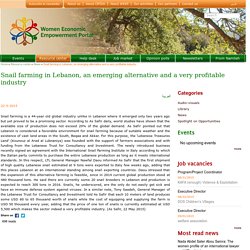 According to As Safir daily, world studies have shown that the available size of production does not exceed 20% of the global demand. As Safir pointed out that Lebanon is considered a favorable environment for snail farming because of suitable weather and the existence of vast land areas in the South, Beqaa and Akkar. For this purpose, the ‘Lebanese Treasures Land’ (Kounouz al Arad al Lubnaniya) was founded with the support of farmers associations and with funding from the Lebanese Trust for Consultancy and Investment. The newly introduced business recently signed an agreement with the International Snail Farming Institute in Italy according to which the Italian party commits to purchase the entire Lebanese production as long as it meets international standards.