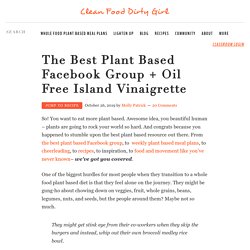 You want to eat more plant based. Awesome idea, you beautiful human – plants are going to rock your world so hard. And congrats because you happened to stumble upon the best plant based resource out there. From the best plant based Facebook group, to weekly plant based meal plans, to cheerleading, to recipes, to inspiration, to food and movement like you’ve never known– we’ve got you covered. One of the biggest hurdles for most people when they transition to a whole food plant based diet is that they feel alone on the journey. When we make big changes it helps to have support, encouragement, and guidance from people who have been through similar changes.

Check out the quick back story and inspiration behind the group in the video below! I hope to see you over in the group! Are you already in our private Facebook group? Island Vinaigrette Ingredients Instructions Drain the cashews and discard the soaking water. Recipe Notes This dressing thickens in the fridge. Wishing you a happy week. I Have a Crush on Anthony Bourdain + Coconut Bacon Recipe. If you’ve been reading this raunchy little blog for a while or getting my Saturday emails, you know a thing or two about me. 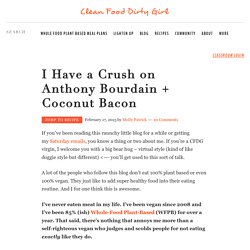 If you’re a CFDG virgin, I welcome you with a big bear hug – virtual style (kind of like doggie style but different) <—- you’ll get used to this sort of talk. A lot of the people who follow this blog don’t eat 100% plant based or even 100% vegan. They just like to add super healthy food into their eating routine. And I for one think this is awesome. I’ve never eaten meat in my life. Before I changed my career course and decided to create an online business for myself so that I could be my own boss, reach more people, wear pajamas to work, and do what I do from anywhere in the world with an internet connection, I worked in the restaurant business. Authentic Homemade Mexican Chorizo. Think chorizo is the same thing in Mexico as in Spain? 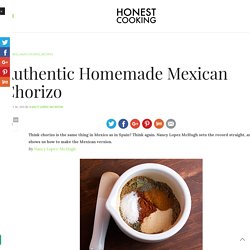 Think again. Nancy Lopez McHugh sets the record straight, and shows us how to make the Mexican version.By Nancy Lopez-McHugh Today I will be sharing one of my favorite Mexican recipes with you, Chorizo. When Europeans hear this word they think of a fermented cured red sausage (Spanish chorizo). But when North Americans hear chorizo they think of a spicy, crumbly meat, red sausage (Mexican chorizo). The key ingredient that gives Mexican chorizo its red color and spiciness is the Ancho chile powder. Cooking with Caroline: Plant-Based Peanut Butter Cream Sweet Potato Br - MamaSezz. Well, they’re not called sweet potatoes for nothin’. 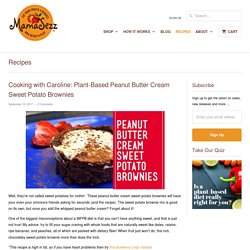 These peanut butter cream sweet potato brownies will have your even your omnivore friends asking for seconds (and the recipe). The sweet potato brownie mix is good on its own, but once you add the whipped peanut butter cream? Forget about it! One of the biggest misconceptions about a WFPB diet is that you can’t have anything sweet, and that is just not true! My advice: try to fill your sugar craving with whole foods that are naturally sweet like dates, raisins, ripe bananas, and peaches, all of which are packed with dietary fiber! *This recipe is high in fat, so if you have heart problems then try this blueberry crisp instead Serves: 10 Prep time: 30 minutes Bake time: 25-30 minutes Cooling time: Overnight Ingredients 1 large or 2 small sweet potatoes 8 soaked and pitted dates ¼ cup + 3 or more tablespoon of natural peanut butter 2 + 2 tablespoons of agave or maple syrup ¼ cup of cacao 8 oz of full fat coconut cream (canned), chilled Directions. Best Damn Vegan Lasagna. 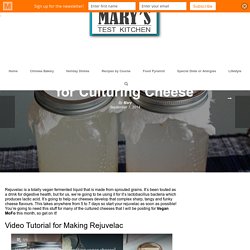 It’s been touted as a drink for digestive health, but for us, we’re going to be using it for it’s lactobacillus bacteria which produces lactic acid. It’s going to help our cheeses develop that complex sharp, tangy and funky cheese flavours. Vegan Bacon Recipe. Vegetarian Thai Peanut Zucchini Noodles - Flavor the Moments. Vegetarian Thai Peanut Zucchini Noodles are an easy low carb meal packed with zoodles and veggies in a delicious Thai peanut sauce! 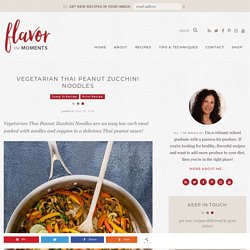 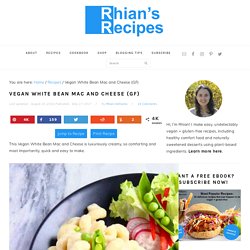 I’ve experimented with so many different creamy vegan pasta sauce recipes, including this creamy pesto sauce and this creamy pumpkin one. I used almond milk thickened with cornflour as a base for the creamy pesto sauce, but I found that using just almond milk and cornflour for a mac and cheese-type sauce didn’t work as well because there wasn’t enough flavour and I wasn’t able to create a thick and creamy sauce without using a lot of cornflour, which, used in large quantities, can make the sauce kind of custard-like, which isn’t really what you want.