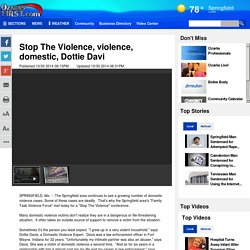 Some of these cases are deadly. That's why the Springfield area's "Family Task Violence Force" met today for a "Stop The Violence" conference. Many domestic violence victims don't realize they are in a dangerous or life-threatening situation. It often takes an outside source of support to remove a victim from the situation. Sometimes it's the person you least expect. Stop the Violence Conference – Keynote Speakers. A veteran film star, best-selling author, renowned advocate for violence prevention, and the first Cuban-born football player to land a tryout with the Miami Dolphins, Victor Rivas Rivers has come a long way since being an abused, angry gang member. 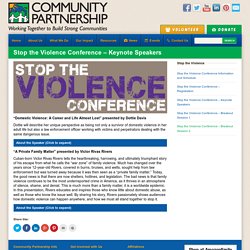 In fact, given his violent upbringing, few of those achievements were ever likely. If not for individuals in his community who were willing to take a stand on his behalf, Rivers doubts he would be alive today. In his beautifully crafted memoir, A Private Family Matter: A Memoir, and the upcoming sequel, A Public Family Matter: Journey of An Accidental Activist, Rivers shares his remarkable life story with the world. Now one of the most well-known domestic violence activists, Rivers uses his voice to advocate for the safety all women and children. So how did Rivers break the cycle of violence?

Carnegie resident to be honored for domestic-violence awareness. Colleen Bowers will be honored Thursday for her work in raising awareness of domestic violence. 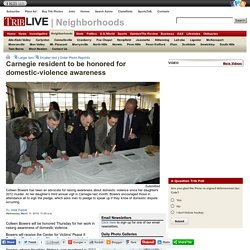 Bowers will receive the Center for Victims' Peace It Together “Freedom from Silence” award tonight for her work with domestic-violence awareness in the community. Bowers, whose daughter, Melissa, was murdered in 2012 as the result of domestic violence, has worked hard to increase awareness of domestic abuse and raising funds for the Pittsburgh-based Center For Victims. HopeLine Hero - Domestic Violence Awareness. Verizon Wireless recently presented Massachusetts resident Lillian O’Donnell with a HopeLine Hero Award to recognize her dedication to eradicating domestic abuse within the local community. 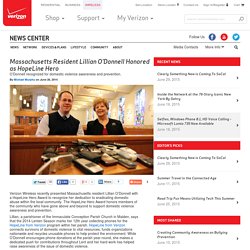 The HopeLine Hero Award honors members of the community who have gone above and beyond to support domestic violence awareness and prevention. Lillian, a parishioner of the Immaculate Conception Parish Church in Malden, says that the 2014 Lenten Season marks her 12th year collecting phones for the HopeLine from Verizon program within her parish. In Honor of Domestic Violence Awareness, Dress Up for Halloween as Your Favorite Victim or Abuser! GJ officer honored for spreading domestic-violence awareness. 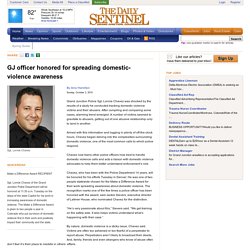 Lonnie Chavez of the Grand Junction Police Department will be honored at 11:30 a.m. Tuesday on the steps of the state Capitol for his work in increasing awareness of domestic violence. 20 Warning Signs of an Emotionally Abusive Relationship. An emotionally abusive relationship is harmful to your confidence and self-esteem, and you may not even be aware of the abuse. 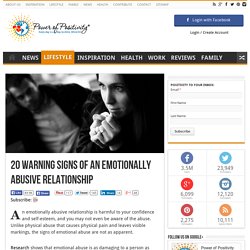 Unlike physical abuse that causes physical pain and leaves visible markings, the signs of emotional abuse are not as apparent. Research shows that emotional abuse is as damaging to a person as both physical and sexual abuse. The study that followed 846 at-risk children over a 14-year period shows that the most common abuse is the psychological threat to safety and security. The reason emotional abuse is so harmful is because it affects how we think about ourselves. HopeLine Hero Dottie Davis Helps Domestic Violence Survivors. May 12, 2015 When domestic violence is personal, there’s no letting go. 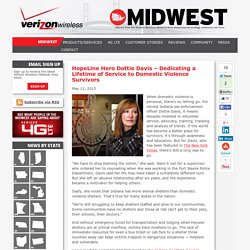 For retired Indiana law enforcement officer Dottie Davis, it means decades invested in volunteer service, advocacy, training, tracking and analysis of trends. HopeLine Hero Dispatchers: Text to 911 Lifesavers in Indiana. May 19, 2015 It sounds so simple: Text a 911 alert to emergency responders for help in a situation when moments matter and lives are threatened. 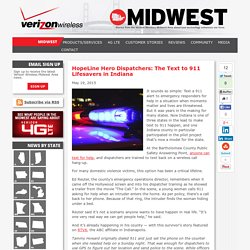 But it was years in the making for many states. Now Indiana is one of three states in the lead to make text to 911 happen, and one Indiana county in particular participated in the pilot project that’s now a model for the state. Northport Boy Scout Named Verizon Wireless HopeLine Hero. NCJFCJ President Judge Peggy Walker Honored as Verizon's 2014 HopeLine Hero for Her Domestic Violence Work. Verizon Contributes More Than $800,000 To Support Georgia's Domestic Violence Organizations in 2014 Company Hosts Event Thanking Organizations for Their Work, Honoring the Military's Domestic Violence Programs, Presenting the 2014 HopeLine Hero Award and Giving $10,000 to Atlanta Mission for Holiday Dinner ALPHARETTA, Ga., Nov. 14, 2014 /PRNewswire/ -- In a ceremony held today at the company's South Area headquarters Verizon announced it has donated more than $800,000 to domestic violence advocacy organizations across the state of Georgia in 2014. 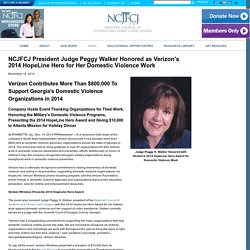 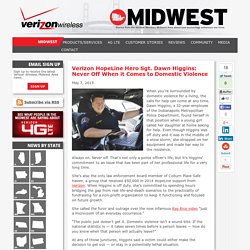 Dawn Higgins, a 32-year-employee of the Indianapolis Metropolitan Police Department, found herself in that position when a young girl called her daughter at home asking for help. Even though Higgins was off duty and it was in the middle of a snow storm, she strapped on her equipment and made her way to the residence. Always on. News, Weather and Sports for Memphis & the Mid-South. MEMPHIS, TN (localmemphis.com)--Domestic violence is a big problem right here in the Mid-South and one local man is working to bring it to an end. Just across the street from 201 Poplar, in an unassuming building, is the Tennessee Correctional Services. It's where a lot of offenders get a second chance.

Wilbert Hill is the man responsible for that, program manager of the Private Probation Services Company. "Any conditions they have to do from the court, we supervise that," said Hill. Kim Lee Becomes Hero For Battered Wives In China. BEIJING -- Her head was ringing from the blows. Once, twice, three times, her husband slammed her face into the living room floor. Kim Lee tried to twist her tall but skinny frame out from under his 91-kilogram (200-pound) body, scraping her elbows and knees on the carpet. He kept on pounding. Cleveland Hero Was A Repeat Domestic Abuser. MAY 8--The Cleveland man credited with helping free female captives from a house of horrors is a convicted felon whose rap sheet includes three separate domestic violence convictions that resulted in prison terms, court records show.

Charles Ramsey, whose 911 call and subsequent TV interviews have made him a microcelebrity, was once a repeat spousal abuser whose marriage ended in divorce following a 2003 felony conviction for battering his wife. Against Violence. San Juan men take lead role in campaign against domestic violence. Local men are taking a public stand in opposition to violence against women. Domestic Violence and Sexual Assault Services of the San Juans has been holding a fundraising campaign to get 100 “stand up” men to donate $100 in tribute to a woman in their life. “This is a way for men to get involved but also be recognized for it,” said DVSAS Community Advocate Alison Sanders. “Men have been honoring daughters, mothers, partners. It’s been really sweet.” ActionForSocialChange. Men as Agents of Change » OASIS. Change Agents - Making a Global Stand Against Domestic Violence Music, Lyrics, Songs, and Videos.

Managing a Nonprofit Corporation - Nonprofit Topics. Directors are responsible for the management and operation of a nonprofit corporation. Nonprofit directors can serve with or without compensation. If you decide to compensate directors, remember that compensation must be deemed "reasonable" by the IRS.

Directors are under the same constraints of duty and care for a nonprofit corporation as they are for a "profit" corporation. Most states require three directors. Teri Hatcher Breaks Down While Speaking at the United Nations About Her Own Sexual Abuse. Sullivan: UVa 'too good' to allow 'evil to reside' - Richmond Times-Dispatch: Richmond News, Crime & Politics.