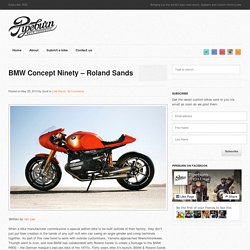 When a bike manufacturer commissions a special edition bike to be built outside of their factory, they don’t just put their creation in the hands of any nuff nuff who can swing an angle grinder and crimp terminals together. As part of this new trend to work with outside customisers, Yamaha approached Wrenchmonkees, Triumph went to Icon, and now BMW has collaborated with Roland Sands to create a homage to the BMW R90S – the German marque’s bad ass bike of the 1970’s. Forty years after it’s launch, BMW & Roland Sands have reimagined the R90S in a modern vein, while still retaining such touches as the blended paint job, ducktail and bikini fairing the original bike was renowned for. 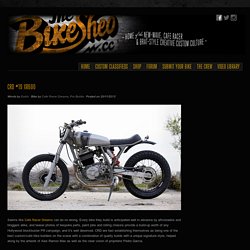 Every bike they build is anticipated well in advance by aficionados and bloggers alike, and teaser photos of bespoke parts, paint jobs and rolling chassis provide a build-up worth of any Hollywood blockbuster PR campaign, and it’s well deserved. CRD are fast establishing themselves as being one of the best custom/cafe bike builders on the scene with a combination of quality builds with a unique signature style, helped along by the artwork of Alex Ramon Max as well as the clear vision of proprietor Pedro Garcia. This bike falls into the new genre of scrambler hybrids that customers are lapping up these days – a platform that, unlike hard-tail wheel hugging brats and other less practical configurations, requires no compromise when it comes to the riding experience.

Who wouldn’t want to ride a custom dirt bike with long travel suspension, pokey big single and lightweight chassis on any terrain. El Solitario’s Ducati Chupito. I was gonna write an adjective-laden intro to El Solitario, for those who may not have come across David and his work before, but after re-checking their own blog intro I realised there was no way I could improve on this, so here it is from the horses mouth: “It all started with a hallucinatory Galician Queimada brew spiked with peyote. 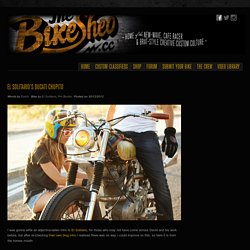 Spirits were invoked, Steve McQueen and Hunter S Thompson were having burn-out competitions through the valleys of our amped-up brains, the last thing we heard them shout at dawn was ‘Fuck it man, life’s too short.’” “The garage is our spiritual home where the constraints of traditional engineering inspire us and are regularly pushed by our imaginations. Bikes come in and are stripped to become a kind of blank canvas, inviting any number of re-interpretations.” “Our desire is to create machines that have so much character, they feel alive, needing to be tamed. Broken Bone ESMC logo also tells the story of what it sometimes means to be a biker. Roaring bikes. 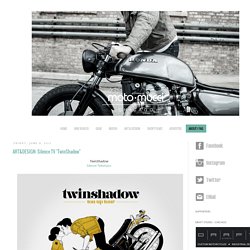 I'll be rewiring the SR250 project soon, so I asked around the forums about getting the connectors, tools and misc. I'll need for the job. Most people directed me to a site called Vintage Connections. They specialize in everything you'll need to rewire your vintage bike, including connector kits like the one pictured below. I picked up the single bike connection kit, "CK-1. " I can say the parts and tools are top notch as well. BMW R65 by Jerikan. I've never had the urge to eat a motorcycle before but this latest build from Jerikan looks delicious. 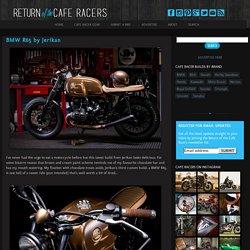 For some bizarre reason that brown and cream paint scheme reminds me of my favourite chocolate bar and has my mouth watering. My fixation with chocolate treats aside, Jerikan's third custom build, a BMW R65, is one hell of a sweet ride (pun intended) that's well worth a bit of drool... Starting with that delectable paint scheme, it's a fusion of chocolate brown on a layer of nougat gold concealing a layer of grey primer. The paint was then licked sanded back to create a convincing aged finish. The frame, swingarm, forks and triple clamps all received a fresh coat of gloss black while the engine cases, headlight bucket and exhaust were done in high temp satin. To compliment the paint Jerikan added brass details to the tank cap, cables and speedo housing. 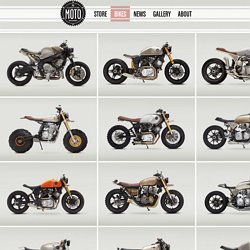