Foot Soldiers. Photographs by Christopher GriffithText by Ariel Kaminer Using a wooden box fitted with a lens on one side and a silver-plated sheet of copper on the other, Louis Daguerre set out, in 1838, to capture the image of a Paris street. 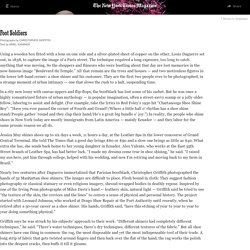 The technique required a long exposure, too long to catch anything that was moving. So the shoppers and flâneurs who were bustling about that day are lost memories in the now-famous image “Boulevard du Temple.” All that remain are the trees and houses — and two motionless figures in the lower left-hand corner: a shoe shiner and his customer. Interactive Documentary Shorts. Eline Jongsma and Kel O'Neill's acclaimed documentary project Empire is an investigation into the aftershocks of the first global capitalist endeavor. 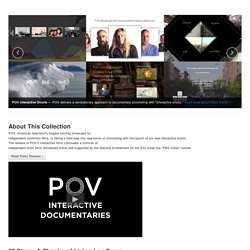 In the 17th century, the colonists and mercenaries of the Dutch East and West India Companies laid claim to lands stretching from the Cape of Good Hope to the Indonesian archipelago, and from New York to South America's Wild Coast. The impact of their actions can still be seen in the cultures—and bloodlines—of people and communities in Africa, Asia, Oceania and the Americas. Empire tells the stories of individuals and communities whose lives are still in some way defined by Dutch colonialism. It is now available online as a series of four interactive experiences: Cradle, Legacy, Migrants and Periphery. #Empire @povdocs View » Images » Made by Hand. Multimedia: Afrikaner Blood, inside a racist bootcamp. Half-Lives: The Chernobyl Workers Now. INTERVIEW PROJECT - 2010 WEBBY AWARDS WINNER.

Delve Video Essays. Adam Westbrook // Journal. In search of serendipity A year ago, out of necessity more than anything else, I started going to the library again. 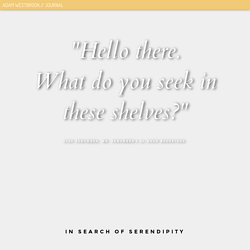 I've spent most of my time at the American Library in Paris, nestled on a quiet street in the shadow of the The Eiffel Tower. You have to crane your neck to see the top of the tall brown (yes it's brown) structure as you approach the entrance. Inside, a small library over three storeys, always a bit too warm and always with ropey wifi, but home to a strange and varied collection of books. Who is the Unluckiest Person in History? I watch therefore I am: seven movies that teach us key philosophy lessons. How can we do the right thing? 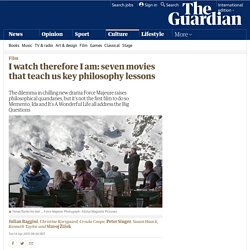 Force Majeure If you had lived in Germany in 1939, would you have helped protect Jews or gone along with their systematic extermination? If you had been an MP 10 years ago, would you have milked your expenses for what they were worth? And if you and your family faced a threat, would you protect them or save yourself? Alphaheaven. Montepio Mare Nostrum. Life in a Day. Into The Mind - Official® Trailer. Seeing the Invisible - Video. Documenting Mythologies - Documentary Film, Radio, Photography. A simple escape from the city becomes the frame for a series of collaborative video essays. 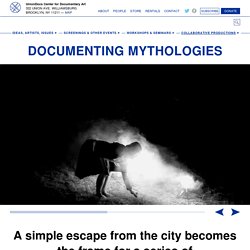 Documenting Mythologies follows a group of media-makers on a road trip from Brooklyn to rural Maine. Diverse aesthetic approaches to documentary are used to explore a theme inspired by the 1957 collection of texts by Roland Barthes titled Mythologies. For Barthes, myths aren’t just the traditional stories we tell; there are myths everywhere within our everyday lives. They are the meanings that we take for granted, “the falsely obvious,” a confusion of Nature and History. For the group on this journey some fifty years later, myths are found in objects like little fountains, places like the Big Apple, habits like online personae, and in the ubiquitous and flexible word ‘whatever.’ Documenting Mythologies TRAILER from UnionDocs on Vimeo. Documenting Mythologies 2013 | 66 min | Color | USA. Oil Boom: See A Modern-Day Gold Rush In Motion. If you've seen any coverage of North Dakota's oil boom, you've seen the images — oil rigs, truck traffic, "man camps," miles of temporary housing. 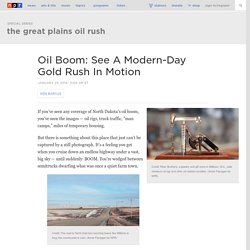 But there is something about this place that just can't be captured by a still photograph. It's a feeling you get when you cruise down an endless highway under a vast, big sky — until suddenly: BOOM. You're wedged between semitrucks dwarfing what was once a quiet farm town. Everywhere you look you see windows peppered with "help wanted" signs. And as thousands rush to the new jobs, affordable housing becomes nearly nonexistent and the state's social fabric begins to fray. We commissioned photographer Annie Flanagan, currently based in Williston, N.D. — the heart of the boom — to capture what it feels like to be a part of it.

"Hey, buddy — wanna buy an oil well? " A few decades ago, you would have probably been wise to run away from that come-on as fast as your feet could carry you. This used to be largely windswept farm and ranching country. Explorations IE Award: Evaluation. In this project, my aim was to make a documentary with good quality and good story-line with the group. 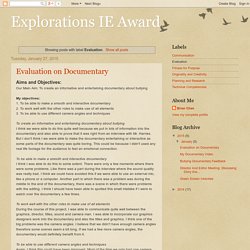 I wanted to be able to work together with my team and work efficiently. Our objective was to be able to make many different perspectives on the problem through interviews. This will result to a well made documentary.