Arte Sana. The Simple Truth about the Gender Pay Gap (2014) You’ve probably heard that men are paid more than women are paid over their lifetimes. 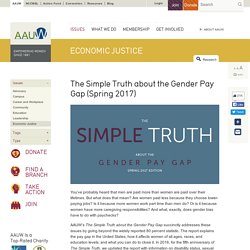 But what does that mean? Are women paid less because they choose lower-paying jobs? Is it because more women work part time than men do? Or is it because women have more caregiving responsibilities? And what, exactly, does gender bias have to do with paychecks? AAUW’s The Simple Truth about the Gender Pay Gap succinctly addresses these issues by going beyond the widely reported 80 percent statistic. Quick Facts According to AAUW, the pay gap won’t close until 2152. Think 80 cents is bad? Women’s Voices Now: Film Festival. Dean Spade on the expansion of criminal justice system in the name of civil rights. Dean Spade has great succinct answers in this four-question profile. 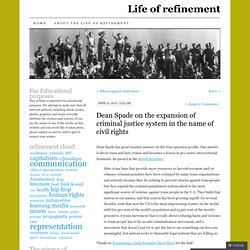 One answer is about trans and hate crimes and becomes a lesson in pro-active intersectional feminism. As quoted in the McGill Reporter: Hate crime laws that provide more resources to law enforcement and/or enhance criminal penalties have been critiqued by many trans organizations and activists because they do nothing to prevent attacks against trans people but they expand the criminal punishment system which is the most significant source of violence against trans people in the U.S. They build that system in our names, and that system has been growing rapidly for several decades, such that now the US is the most imprisoning country in the world, with five per cent of the world’s population and 25 per cent of the world’s prisoners.

Thanks to Feministing’s Daily Feminist Cheat Sheet for the link! Like this: Stop Law Enforcement Violence. Stop law enforcement violence against women of color & trans people of color! 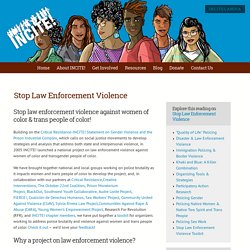 Building on the Critical Resistance-INCITE! Statement on Gender Violence and the Prison Industrial Complex, which calls on social justice movements to develop strategies and analysis that address both state and interpersonal violence, in 2005 INCITE! Launched a national project on law enforcement violence against women of color and transgender people of color.

We have brought together national and local groups working on police brutality as it impacts women and trans people of color to develop the project, and, in collaboration with our partners at Critical Resistance,Creative Interventions, The October 22nd Coalition, Prison Moratorium Project, BlackOut, Southwest Youth Collaborative, Audre Lorde Project, FIERCE! Indigenous feminisms. Loretta Ross on the Phrase “Women of Color” Students of mine who are unversed in race politics frequently use the phrase “colored people.” 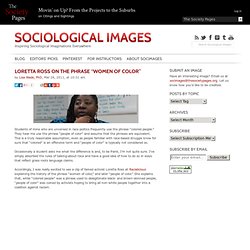 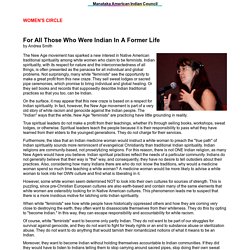 Indian spirituality, with its respect for nature and the interconnectedness of all things, is often presented as the panacea for all individual and global problems. Not surprisingly, many white "feminists" see the opportunity to make a great profit from this new craze. They sell sweat lodges or sacred pipe ceremonies, which promise to bring individual and global healing. Or they sell books and records that supposedly describe Indian traditional practices so that you too, can be Indian. On the surface, it may appear that this new craze is based on a respect for Indian spirituality. True spiritual leaders do not make a profit from their teachings, whether it's through selling books, workshops, sweat lodges, or otherwise. Audre Lorde Project. Photo by Elsa Dorfman The Black feminist, lesbian, poet, mother, warrior Audre Lorde (1934-1992) was a native New Yorker and daughter of immigrants. 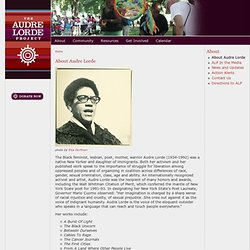 Both her activism and her published work speak to the importance of struggle for liberation among oppressed peoples and of organizing in coalition across differences of race, gender, sexual orientation, class, age and ability. Herstories: A Digital Collection. The Second Sex: Thirty Years Later Conference Program.

Colors of Violence. A young Native woman was once gang raped by prominent members of an urban Indian community I lived in. 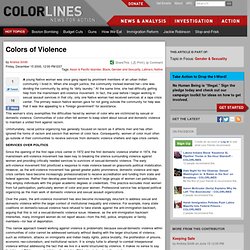 When she sought justice, the community instead blamed her—she was dividing the community by airing its “dirty laundry.” At the same time, she had difficulty getting help from the mainstream anti-violence movement. In fact, the year before I began working in sexual assault services in that city, only one Native woman had received services at a rape crisis center. The primary reason Native women gave for not going outside the community for help was that it was like appealing to a “foreign government” for assistance. This woman’s story exemplifies the difficulties faced by women of color who are victimized by sexual or domestic violence. Celebrating Reauthorization of the Violence Against Women Act « OVW Blog. Today President Obama signed the Violence Against Women Reauthorization Act (VAWA) of 2013, marking an historic day in our nation’s effort to reduce domestic and sexual violence. 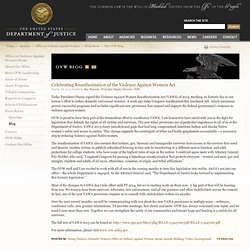 A week ago today Congress reauthorized this landmark bill, which maintains proven successful programs and includes significant new provisions that expand and improve the federal government’s response to violence against women. OVW is proud to have been part of the tremendous effort to reauthorize VAWA. Celebrating Reauthorization of the Violence Against Women Act « OVW Blog. Violence Against Women Act Becomes Trans-Inclusive « FORGE. Today history was made by succeeding in protecting transgender and gender non-conforming (as well as lesbian, gay, and bisexual) victims of domestic violence, sexual assault, dating violence and stalking from discrimination by services funded by the Violence Against Women Act (VAWA). 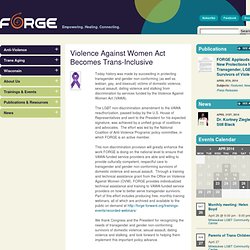 The LGBT non-discrimination amendment to the VAWA reauthorization, passed today by the U.S. Not So Liberal? Violence Against Transgender Women in the Bay Area. Posted on Tuesday, December 10th, 2013 at 3:39 pm Author: s.e. smith California’s Bay Area enjoys a reputation as one of the most liberal regions in the country, a locale infamous for ‘San Francisco values,’ the alleged libertine attitudes of the Castro, the quirky ‘How Berkeley Can You Be?’ 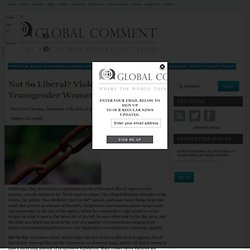 LGBT & Gay Hate Crimes: Transgender Woman Dies After Beating in Front of NYPD Precinct. Islan Nettles was out in New York City with friends when a group of young men approached her, learned she was a transgender woman and began taunting and maliciously beating her—right in front of a police precinct in Harlem. The fashion design student with delicate features was punched in the face, knocked to the ground and beaten until she lost consciousness on the night of August 16. “They were called f****, they were called he-she’s, she males, things of that nature,” Nettles’ mother told a local newscast. Courtney O'Donnell: Swedish Judge Rules Man Not Guilty of Attempted Rape of Trans Woman Because She Has No Vagina. At first glance this appears to be something right out the tabloids, but Örebro District Court Judge Dan Sjöstedt ruled that the planned rape by the attacker would have been impossible to carry out in the absence of a vagina.

The attacker was instead charged with a considerably lesser crime. According to a Swedish news report translated into English, the attacker brutally beat the victim and ripped off her pants in an attempt to rape her. A witness rushed to the scene and intervened. The Trans Women's Anti-Violence Project - About. Violence Against Transgender People and People of Color is Disproportionately High, LGBTQH Murder Rate Peaks. The murder rate of people who are lesbian, gay, bisexual, transgender, queer, and HIV-affected (LGBTQH) is at its highest, according to a recently released 2011 report from the National Coalition of Anti-Violence Programs (NCAVP).

Why Trayvon’s death matters to feminists. In the ever prescient and poignant spirit of the Color Lines blog out of the Applied Research Center, Aura Bogado puts implicit bias on trial. She calls it casual racism and it’s a pretty good idea for feminist anti-violence activists to keep it in mind. All forms of oppression are intrinsically connected. That includes racism and sexual violence. Editorials. Social Justice Vol. 31, No. 4 (2004) Native women who are survivors of violence often find themselves forced into silence around sexual and domestic violence by their communities because their communities desire to maintain a united front against racism and colonialism. At the same time, the white-dominated antiviolence movement often pits Native women against their communities, arguing that they should leave the communities in which their abusers reside. Sterilization of Puerto Rican Women. A Selected, Partially Annotated Bibliography By Florita Z.

Louis de Malave. Office for the Promotion of Women in Science, Engineering & Mathematics. "Are You a Feminist or a Womanist?" Staceyann Chin Responds. Feminist texts written by women of color.

Feminism And Race: Just Who Counts As A 'Woman Of Color'? : Code Switch. Hide captionThere needs to be more diversity in feminism, writes Lindsey Yoo.