Media.eu sur Twitter : "#World #Press #Freedom #Day event in Brussels @BOZARbrussels 3 May 2015 Info/Registration. Difference day. 10 Million Child Deaths Attributed to a Lack of Toilets. In a world in which 14 percent of the population in the 21st century still defecate outdoors, children remain among the most vulnerable to a lack of toilets, contamination from human waste and dirty water. 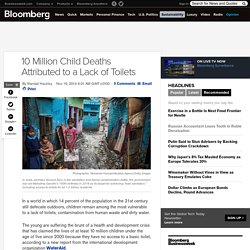 The young are suffering the brunt of a health and development crisis that has claimed the lives of at least 10 million children under the age of five since 2000 because they have no access to a basic toilet, according to a new report from the international development organization WaterAid. The United Nations, which designated today as World Toilet Day to highlight sanitation as a developmental priority, says about 35 percent -- 2.5 billion of the planet’s 7 billion people -- live without basic sanitation facilities such as toilets and latrines. That’s at a time when more people have mobile phones on Earth than a toilet. Globally, an estimated 1.8 billion drink fouled water that’s faecally contaminated, according to World Health Organization/UNICEF figures. ‘Preventable Deaths’ Silviakspiva : I just wanted to remind everyone ... World of Tanks: superpopularna, darmowa (i zarabiająca) gra z Białorusi.

World Thinkers 2013. Left to right: Ashraf Ghani, Richard Dawkins, Steven Pinker © US Embassy, Kabul © Rex Features After more than 10,000 votes from over 100 countries, the results of Prospect’s world thinkers 2013 poll are in. 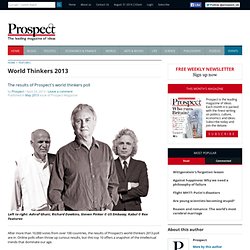 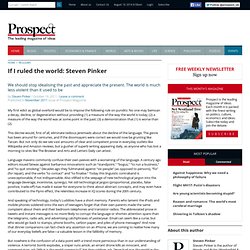 This decree would, first of all, eliminate tedious jeremiads about the decline of the language. The genre has been around for centuries, and if the doomsayers were correct we would now be grunting like Tarzan. But not only do we see vast amounts of clear and competent prose in everyday outlets like Wikipedia and Amazon reviews, but a gusher of superb writing appearing daily, as anyone who has lost a morning to sites like The Browser and Arts and Letters Daily can attest. Everyone for tennis! UK grinds to halt as Murray seeks glory - Tennis - Sport.

Afghanistan's multimillion 'highway to nowhere' - Asia - World. The 2,700km "Highway 1", largely bankrolled by American and Saudi millions, was seen as a symbol of Afghanistan's emergence as a modern democratic nation after decades of oppressive rule and conflict. 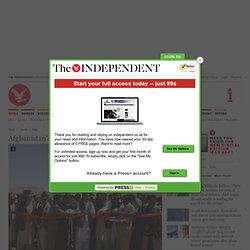 But senior figures within the Foreign Office (FCO) have questioned the priority given to the project – and the standard of the finished road. A confidential paper under discussion in the department, seen by The Independent on Sunday, claims the road is not completely "metalled" with a durable surface, and has a layer of tarmac too thin to last an Afghan winter, leaving lengthy stretches in danger of disintegration. The document also complained that the highway was "of no value at all" to the vast majority of Afghans, who need better local roads to help them travel to towns closer to home. Highway 1, it seems, is the road to nowhere, a metaphor for costly, ill-planned development projects which have acted as a bran tub of kickbacks for corrupt officials. 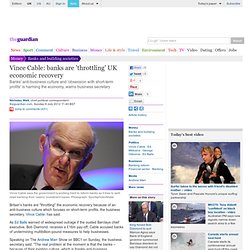 Photograph: Sportsphoto/Allstar Britain's banks are "throttling" the economic recovery because of an anti-business culture which focuses on short-term profits, the business secretary, Vince Cable, has said. Melinda Gates hits out at 'war on women' on eve of summit. Campaigners have attacked a "war on women" being waged by religious organisations before an international summit on family planning to be held in London this week. 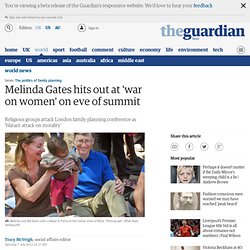 Jorge Rafael Videla convicted of baby thefts. Sex workers protest against anti-prostitution plans - Europe - World. Robert Fisk: The rebel sheikh defying Hezbollah to take aim at Assad - Robert Fisk - Commentators. I have this on the authority of Sheikh Ahmed al-Assir, the Sidon Salafist who has blocked the road between Sidon and Beirut and who promises me that his huge beard –a great field of graying hair that hangs proudly down his chest – took 20 years to grow. 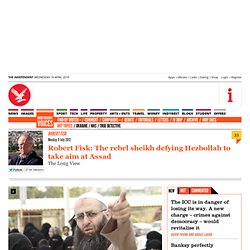 Exclusive: Barclays insider lifts lid on bank's toxic culture - Business News - Business. Speaking exclusively to The Independent, the banker alleges that senior executives would have known of Libor fiddling in 2008. 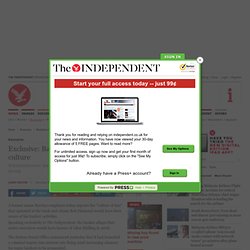 The Serious Fraud Office announced yesterday that it had launched a criminal inquiry into interest rate fixing amid increasing clamour for rogue bankers to be prosecuted. Speaking on condition of anonymity, the banker says that senior Barclays bosses would have been told about Libor concerns because staff were drilled to pass anything untoward up to their managers. Failure to do this meant the sack. "Libor fixing was escalated by several people up to their directors, they would then have escalated it up the line because at Barclays if you don't escalate, and it is found out that you haven't, it is grounds for disciplinary action. Charity condemns tourists' use of fresh water in developing countries.

The disproportionate use of fresh water by tourists in developing world destinations is causing local conflict, exacerbating poverty and helping to spread disease, says a report to be published next week by the charity Tourism Concern. 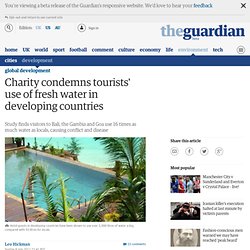 The report examined five coastal destinations popular with international tourists – the Gambia, Bali in Indonesia, the islands of Zanzibar off the coast of Tanzania, and Goa and Kerala in India. Researchers claim to have uncovered huge inequalities in consumption and access to water supplies between tourists and the local populations. "While hotels may have the money and resources to ensure their guests enjoy several showers a day, swimming pools, a round of golf, and lush landscaped gardens, neighbouring households, small businesses and agricultural producers can regularly endure severe water scarcity," says the report. Sheela Gracias, a local activist and legal advocate in Goa, told Tourism Concern: "The hotels here all have lush lawns and boreholes. Pussy Riot Could Go Free Monday. Nfidence is key to lasting global economic recovery. The fifth anniversary of the start of the financial crisis is approaching and is being marked by concerted action to prevent a fresh downward lurch in the global economy. 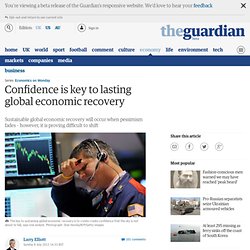 Interest rates have been cut in the eurozone and in China; the Bank of England has announced it will pump another £50bn into the UK economy; the US central bank, the Federal Reserve, is trying to generate lower long-term borrowing costs, and will probably not leave the stimulus measures at that. It seems like a good time to take stock of where things stand, and how events might unfold over the coming months.