About Video Games and Movies

Prometheus (2012) – Calvinball Mythology and the Void of Meaning. 0. 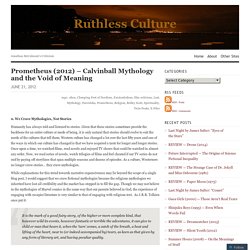 We Crave Mythologies, Not Stories Humanity has always told and listened to stories. Given that these stories sometimes provide the backbone for an entire culture or mode of being, it is only natural that stories should evolve to suit the needs of the cultures that tell them. Western culture has changed a lot over the last fifty years and one of the ways in which our culture has changed is that we have acquired a taste for longer and longer stories.

Once upon a time, we watched films, read novels and enjoyed TV shows that could be watched in almost any order. While explanations for this trend towards narrative expansiveness may lie beyond the scope of a single blog post, I would suggest that we crave fictional mythologies because the religious mythologies we inherited have lost all credibility and the market has stepped in to fill the gap. Demonology Warlock DPS Rotation, Cooldowns, and Abilities (WoD 6.0.3) General Information On this page, we list your Demonology Warlock core abilities and how they should be used together (rotation) in World of Warcraft WoD 6.0.3. 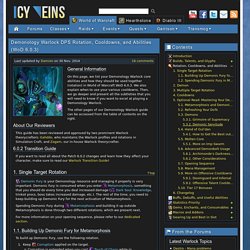 We also explain when to use your various cooldowns. Then, we go deeper and present all the subtleties that you will need to know if you want to excel at playing a Demonology Warlock. The other pages of our Demonology Warlock guide can be accessed from the table of contents on the right. Why WoW Is Now All About WarCraft 3-Style Player Bases. By Tom Mayo on December 8th, 2014 at 5:00 pm. 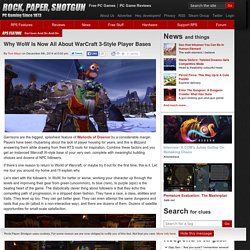 Garrisons are the biggest, splashiest feature of Warlords of Draenor by a considerable margin. Players have been rhubarbing about the lack of player housing for years, and this is Blizzard answering them while drawing from their RTS roots for inspiration. Combine these factors and you get an instanced Warcraft III-style base of your very own, complete with meaningful building choices and dozens of NPC followers.

If there’s one reason to return to World of Warcraft, or maybe try it out for the first time, this is it. Let me tour you around my home and I’ll explain why. Let’s start with the followers. Early in the Draenor experience, my subconscious committed to getting every single follower to max level and epic status before my conscious mind had stopped thinking about breakfast. My garrison is level three already (the maximum) and while I haven’t finished levelling every individual building, I have filled all my plots. Heavy Petting: The Sims 4 Adds Pools. Gamify Your Life. 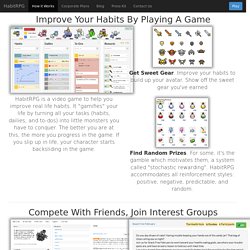 It "gamifies" your life by turning all your tasks (habits, dailies, and to-dos) into little monsters you have to conquer. The better you are at this, the more you progress in the game. 'Divinity: Original Sin' Has the Most Innovative RPG Combat in Years. Divinity: Original Sin has been lauded by fans and critics as a breakthrough for Western RPGs, and there are three reasons. 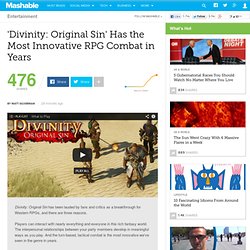 Players can interact with nearly everything and everyone in this rich fantasy world. The interpersonal relationships between your party members develop in meaningful ways as you play. And the turn-based, tactical combat is the most innovative we've seen in the genre in years. Check out our hands-on preview above. We really can't recommend this game enough. What to Play is a weekly show where Mashable writers kick the tires of promising new video games and let you decide if they're worth playing.

Why GamerGate Can't Continue. GamerGate is growing from a battle inside gaming to a larger culture war. 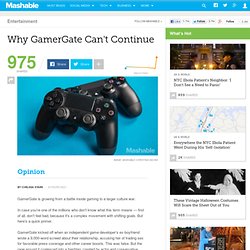 In case you're one of the millions who don't know what this term means — first of all, don't feel bad, because it's a complex movement with shifting goals. But here's a quick primer. GamerGate kicked off when an independent game developer's ex-boyfriend wrote a 9,000-word screed about their relationship, accusing her of trading sex for favorable press coverage and other career boosts. 'Ori and the Blind Forest' Will Melt Your Heart and Your Thumbs. The Best Minecraft Mods And Modpacks. By Duncan Geere on October 13th, 2014 at 9:00 pm. 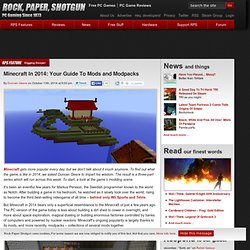 Minecraft gets more popular every day, but we don’t talk about it much anymore. To find out what the game is like in 2014, we asked Duncan Geere to impart his wisdom. The result is a three-part series which will run across this week. To start, a look at the game’s modding scene. Freeware Garden: Mimicry Man. By Konstantinos Dimopoulos on October 6th, 2014 at 11:00 am. 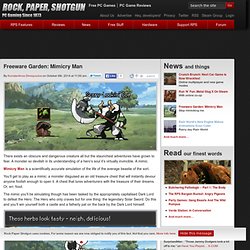 There exists an obscure and dangerous creature all but the staunchest adventures have grown to fear. A monster so devilish in its understanding of a hero’s soul it’s virtually invincible. A mimic. Mimicry Man is a scientifically accurate simulation of the life of the average beastie of the sort. Editorial: We Need The BBC In Videogames. By Graham Smith on September 29th, 2014 at 7:00 pm. 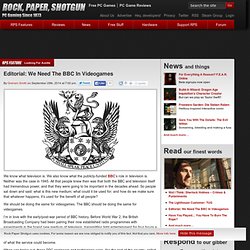 We know what television is. We also know what the publicly-funded BBC’s role in television is. Neither was the case in 1945. All that people knew then was that both the BBC and television itself had tremendous power, and that they were going to be important in the decades ahead.