Birmingham City University - Sign In. High-End Shopping In The Sharing Economy: Now We Can All Have Couture. The Kardashians don't exemplify thriftiness, so it was surprising when Khloé, Kendall, and Kylie partnered with the luxury consignment site The RealReal in August. 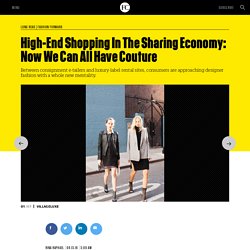 The sisters listed 200 pieces from their personal closets, ranging from Chanel purses to Christian Louboutin heels, at nearly 80% off retail value. "Now you can own pieces from my closet! " Khloé Kardashian proudly tweeted to her 21 million followers. The entire collection sold out within 24 hours, a rep for The RealReal confirmed. GM's CEO: Ride Sharing Is a Bigger Shift Than Electric, Autonomous. General Motors CEO Mary Barra says the auto industry is undergoing at least four fundamental changes, but that the emerging practice of sharing rides and cars is requiring the biggest shift in the way the company—and its employees—think. 3 Things Leaders Must Consider For The Sharing Economy. The sharing economy's effect on business. Collaborative consumption is an expanding economic force in our country and globally, with consumers sharing everything from cars, bicycles and even agricultural equipment. 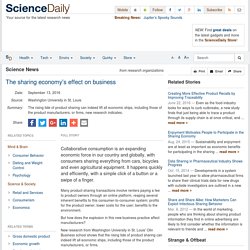 It happens quickly and efficiently, with a simple click of a button or a swipe of a finger. Many product-sharing transactions involve renters paying a fee to product owners through an online platform, reaping several inherent benefits to this consumer-to-consumer system: profits for the product owner; lower costs for the user; benefits to the environment. But how does the explosion in this new business practice affect manufacturers? New research from Washington University in St. Louis' Olin Business school shows that the rising tide of product sharing can indeed lift all economic ships, including those of the product manufacturers, or firms.

"These past few years have seen an enormous growth in sharing," said Baojun Jiang, assistant professor of marketing at Olin. OMA and Bengler propose digital platform to disrupt the sharing economy. Oslo Architecture Triennale 2016: OMA has teamed up with creative studio Bengler to propose Panda, a app that allows workers being exploited digital sharing platforms like Uber and Airbnb to fight back against their employers. 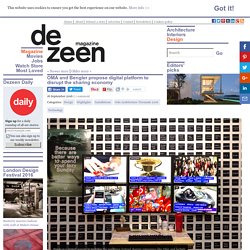 On show as part of the Oslo Architecture Triennale 2016, which opened last week, the "disruption-as-a-service toolkit" aims to mobilise the workforce behind sharing companies, by making them part of a trade-union-style network. The conceptual project takes the form of an app that provides individuals with services and strategies, ranging from communications networks to legal support.

OMA architect Ippolito Pestellini Laparelli described it as a "super colluder". "It aggregates common issues across many people and defines a strategy to give them negotiating power," he told Dezeen in an exclusive interview. The architect compares the situation with the regime of former British prime minister Margaret Thatcher. Rent The Runway Announces Unlimited, Luxury Fashion Rental For Everyday Wear. 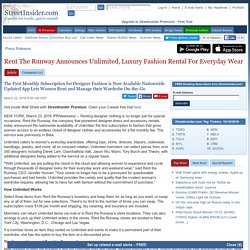 Rent the Runway, the company that pioneered designer dress and accessory rentals, today announced the nationwide availability of Unlimited, the first subscription to fashion that gives women access to an endless closet of designer clothes and accessories for a flat monthly fee. Recharge Raises $2.3 Million to Rent Hotel Rooms By The Minute. Home-sharing company Airbnb has emerged as an economic force by enabling people to turn extra space in their homes into cash. 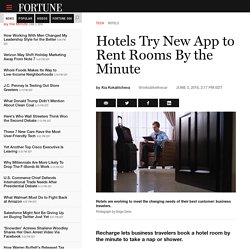 But what about traditional hotels? It turns out, with a little bit of technology and a lot of trust, a few hotels in San Francisco are already starting to squeeze extra use—and revenue—out of their rooms by renting them out by the minute with the help of a startup named Recharge. The young company, lets customers use its mobile app to book empty rooms at partner hotels. How New Sharing Economy Companies Handle a Landslide of Payments Without Getting Buried. A group of my customers has grown by 10x, year over year, for four years in a row. 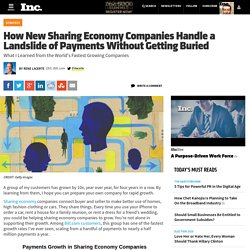 By learning from them, I hope you can prepare your own company for rapid growth. Sharing economy companies connect buyer and seller to make better use of homes, high fashion clothing or cars. They share things. Every time you use your iPhone to order a car, rent a house for a family reunion, or rent a dress for a friend's wedding, you could be helping sharing economy companies to grow.

You're not alone in supporting their growth. Trendy Now, Trash Tomorrow. A pop up store opened by Greenpeace in Hong Kong gives away used clothes to the public for free, demonstrating shopping alternatives like swapping and second hand. 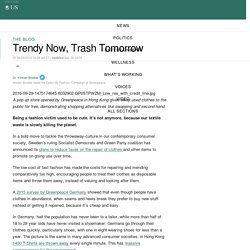 Being a fashion victim used to be cute. It’s not anymore, because our textile waste is slowly killing the planet. In a bold move to tackle the throwaway-culture in our contemporary consumer society, Sweden’s ruling Socialist Democrats and Green Party coalition has announced its plans to reduce taxes on the repair of clothes and other items to promote on-going use over time. The low cost of fast fashion has made the costs for repairing and mending comparatively too high, encouraging people to treat their clothes as disposable items and throw them away, instead of valuing and looking after them. A 2015 survey by Greenpeace Germany showed that even though people have clothes in abundance, when seams and heels break they prefer to buy new stuff instead of getting it repaired, because it´s cheap and easy.

Sweden Launches "ShareWear," a Line of Clothing Anyone Can Borrow.