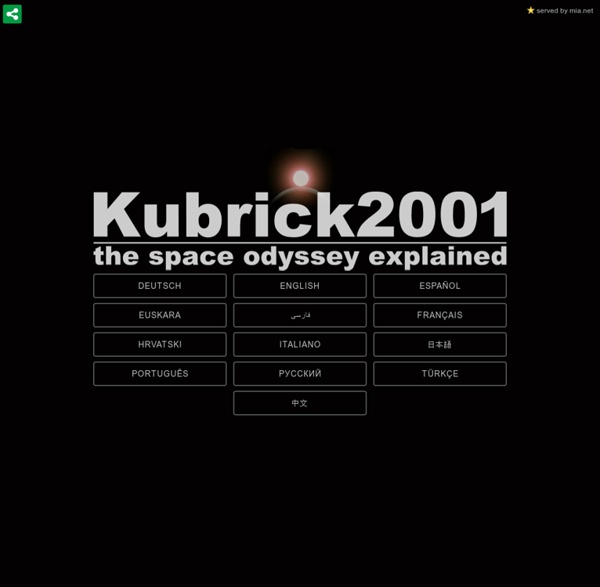 2001: A Space Odyssey Internet Resource Archive: The Special Effects of "2001: A Space Odyssey" Meanings: Special Effects The Special Effects of "2001: A Space Odyssey" By George D. DeMet Originallly published in DFX, July 1999 Stock Photo Agencies G’day from Sunny Sydney, I just stumbled upon your site which looks great by the way. I manage a group on Linkedin that you should be able to link to here: …for Photo Editors, Art Buyers and Creative Directors. We also run a successful image syndication agency specialising in images of women for professional buyers. Project 3: Antialiasing, Subsampling, Supersampling and the Frequency Domain Carlos Eduardo Scheidegger cscheid@cs.utah.edu UID: 00454219 Abstract: In this project, I investigated techniques for antialiasing for image subsampling. I also analyzed their behavior, especially in the frequency domain. Finally, I also analyzed and investigated interpolating supersampling filters for increasing the spatial resolution of an image.

Sedlec Ossuary Coordinates: Chapel Interior Four enormous bell-shaped mounds occupy the corners of the chapel. An enormous chandelier of bones, which contains at least one of every bone in the human body, hangs from the center of the nave with garlands of skulls draping the vault. The Underview on 2001: How Was It Done? In flat contradiction of what I have written elsewhere (that I rather like the mystery of not always knowing how clever effects are achieved), requests for explanations of some of the wholly convincing yet baffling scenes from "2001: A Space Odyssey" finally compel me to reveal a few secrets (with due respect to all those already in the know, who probably knew long before I did). If you think it will spoil your own enjoyment of the film, perhaps you should give this page a miss. I am alright, I kept my eyes closed while I wrote it. The genius of Stanley Kubrick is such that he and his visual effects specialists took such well- worn techniques as strings and mirrors to achieve the effects they wanted, but moved them to a whole new level of realisation (and you may be surprised at some of the people who laid the groundwork for such effects - see my "Extras" page); and if those methods were inadequate, they simply devised concepts all of their own. Below, you will find (some!) Home Page

low-fi glamour: incomplete distraction Stock photography and making “new photos” out of them. More “glamour” ….. by Art Chantry ( Art@artchantry.com) : 3DJ - Andreas Koller The realtime 3D-scan of the DJ is manipulated into abstract graphics. The depth data was aquired with a Kinect and parameterized with a MIDI-controller. Created with Processing. Using toxiclibs, Processing Kinect library by Dan Shiffman, PeasyCam, promidi and FullScreen API as well as code from examples from Generative Gestaltung. Greatest Film Directors of All Time Greatest Film Directors of All-Time: These honored selections are designed as a tribute to some of the greatest directors of predominantly English-language films, with suggested or recommended Best Films or 'Must-See' Films from their filmographies. Unfortunately, some of these directors have been pushed aside to make way for more recent works, but it should be noted that many of these film-makers were highly innovative mavericks and renegades who challenged the established 'system' that existed during their time. These choices are meant to encourage discussion and comparison, and to educate filmgoers about some of film history's most legendary and influential forces in film-making. The premise of honoring these film directors is based upon the debatable auteur theory -- the idea that the director is the primary 'author' or voice of a movie, and through a director's film, we see one person's way of viewing the world -- one that has the potential to change the way we see the world.