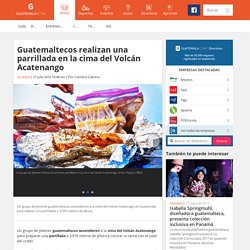 Grain. Grain. Grain. James and Chelsea Minola met during a Wintersession course in Guatemala while studying at the Rhode Island School of Design and quickly learned that they had quite a bit of personal history in common: Both grew up in Southern California and had family living on an island in the Puget Sound. 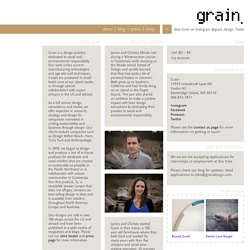 The Maya Decorators Had It Tough - NYTimes.com. Grain’s new line of decorative pillows was produced with Maya artisans in Guatemala — the country, as it happens, where the company’s now-married founders met eight years ago while students at Rhode Island School of Design. 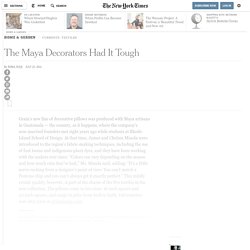 At that time, James and Chelsea Minola were introduced to the region’s fabric-making techniques, including the use of foot looms and indigenous-plant dyes, and they have been working with the makers ever since. El Portal del Fútbol Chapín. Guatemala enlists top instagrammers to help promote tourism. In a nod to Instagram's increasingly influential role in advertising and shaping public opinion, Guatemala's tourism board (InGuat) invited 12 of the world's leading instagrammers to travel around the country and snap what they saw. 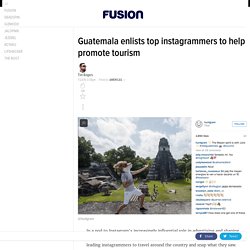 The Instagram tour — the first of its kind in Central America — brought together leading instagrammers from key markets in the U.S., Sweden, Latin America and Spain. The photographers visited the colonial city of Antigua, the pre-Columbian ruins of Tikal, and a few sites around Guatemala City, then posted their photos to their individual accounts, some of which have hundreds of thousands of followers. The tour, which ended yesterday, is part of an emerging trend where Central American countries, many of which depend on tourism as a main cash cow, are using their limited promotional budgets to create new media targeting younger tourists whose views of the region weren't shaped by memories of past wars.

Kiva con español 1. Before I explain what we did with Kiva in Spanish 1, I have to say that I got this idea from Kristy Placido and Carrie Toth, who did this with their Spanish 3 and 4 classes. 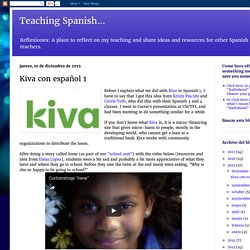 I went to Carrie's presentation at CSCTFL and had been wanting to do something similar for a while. If you don't know what Kiva is, it is a micro-financing site that gives micro-loans to people, mostly in the developing world, who cannot get a loan at a traditional bank. Kiva works with community organizations to distribute the loans. After doing a story called Irene (as part of our "school unit") with the video below (resources and idea from Elena López), students were a bit sad and probably a bit more appreciative of what they have and where they go to school. Before they saw the twist at the end many were asking, "Why is she so happy to be going to school? 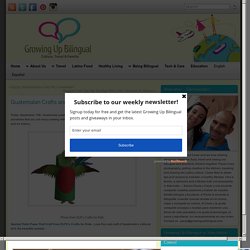 Here are some fun activities and printables that you can enjoy making with your children so they can learn more about Guatemala, it’s culture and it’s history. Photo from DLK’s Crafts for Kids Quetzal Toilet Paper Roll Craft from DLTK’s Crafts for Kids. Guatemalan Athletes Are Dribbling, and Not Only With Their Feet. Basketball here also serves as an outlet for women and girls. 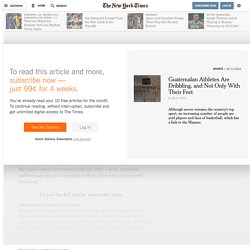 It is as common to see school-age girls in plaid skirts and white blouses playing the game in the town center as it is to see their male peers, and the women’s championship drew nearly as big a crowd as the men’s game that followed. Girls are generally discouraged from playing soccer, typically by their fathers, who view it as a male domain, said Clarinda Chavajay, a physical education teacher in San Pedro. “Fathers tell girls that basketball is more appropriate for women,” Chavajay said. About a five-minute walk from the town center sits an eight-year-old gym with a concrete court, a seating capacity of close to 1,000 and an electronic scoreboard — a basketball palace by Guatemalan standards. The Magnificent Kite Festival of Sumpango, Guatemala. This Friday November 1st, or Day of the Dead in Guatemala, the municipality of Sumpango celebrated with their famous annual Kite Festival. 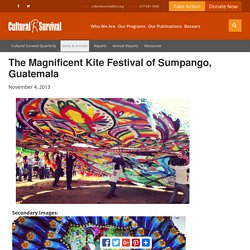 Thousands of people from all over the country, as well as foreigners, travel to Sumpango on this day to see the magnificent, giant kites that various community groups from Sumpango have been working on for months prior to the event. There is music, food, drinks and dancing on this joyous event, which is the pride and joy of citizens of Sumpango. When you see the incredible kites, it is easy to see why. Home. The World Factbook. ShowIntroduction :: GUATEMALA Panel - Collapsed The Maya civilization flourished in Guatemala and surrounding regions during the first millennium A.D. 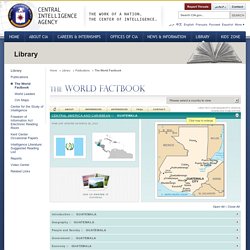 After almost three centuries as a Spanish colony, Guatemala won its independence in 1821. During the second half of the 20th century, it experienced a variety of military and civilian governments, as well as a 36-year guerrilla war. Chicken Buses of Guatemala. What happens to yellow school buses retired from commission in the United States? 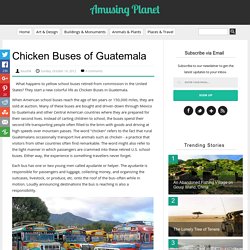 They start a new colorful life as Chicken Buses in Guatemala. When American school buses reach the age of ten years or 150,000 miles, they are sold at auction. Many of these buses are bought and driven down through Mexico to Guatemala and other Central American countries where they are prepared for their second lives. Instead of carting children to school, the buses spend their second life transporting people often filled to the brim with goods and driving at high speeds over mountain passes.

The word "chicken" refers to the fact that rural Guatemalans occasionally transport live animals such as chicken - a practice that visitors from other countries often find remarkable. What It's Like to Live in Guatemala (And Why We're Still Here) So... a crazy thing happened the other day. We woke up, and discovered that we live in Guatemala (that's not the crazy part).

The crazy part is that we discovered that we've been living here for one year!!! Yes, can you believe it!! It's been one full year since we first crossed the border from Belize, stopped off in Tikal, and then descended from the Guatemalan highlands to the lakeside town of Panajachel (all the while hoping our brakes wouldn't go out on that steep, windy road that drops down from Solola.)

Just a few days ago, we officially celebrated our 'Pana-versary', one full-year living on the shores of Lake Atitlan, a comparatively long time to be in one place for a nomadic, wandering family like ours. Compare The United States To Guatemala. Guatemala’s civil war ended 20 years ago today. Here are 4 things to know about its path to democracy. Protesters in Guatemala City celebrate on Sept. 1, 2015, as they hear the news that Guatemala’s Ccngress has voted to withdraw President Otto Perez Molina’s immunity from prosecution.