A Simple Subjunctive Trick. Here’s a super-simple trick for using the allegedly “advanced” subjunctive from Day 1 in Spanish class. When you are creating a story– or an Invisible, or an OWI– you ask the kids for suggestions. All we do is, we restate suggestions in the subjunctive, which is appropriate. So, if this is “classical” TPRS, and our character has to go somewhere, we ask ¿adónde va la sirena? We solicit three suggestions and as each one comes up, we say es posible que la sirena vaya a Nueva York, then también es posible que vaya a la casa de Barack Obama, and finally es posible que vaya a San Diego.

We do our five-second pop-up by saying we say “vaya” instead of “va” because it’s not certain (yet) where the mermaid goes. We can also do this with tener, querer, ser, etc: es posible que tenga un perro, es probable que quiera tener menos tarea, and es posible que el hombre sea malo, etc. Quirky Scripts: An Easy Way to Teach "Hard" Language - Indwelling Language. Is there a Quirky Script inside there? 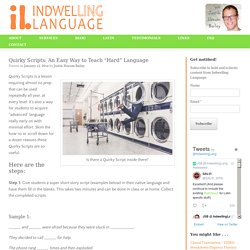 Quirky Scripts is a lesson requiring almost no prep that can be used repeatedly all year, at every level. It’s also a way for students to acquire “advanced” language really early on with minimal effort. Skim the how-to or scroll down for a dozen reasons these Quirky Scripts are so useful. Here are the steps: Step 1: Give students a super short story script (examples below) in their native language and have them fill in the blanks. Building Diversity Positive Characters in TPRS Stories (NTRPS 2017) ComprehensibleRVA – Teaching Spanish through CI in central VA. La bolsa mágica – The Comprehensible Classroom.

I came up with this game as a way to practice the term “saca” (takes out) as part of the ¡Saca el boleto! 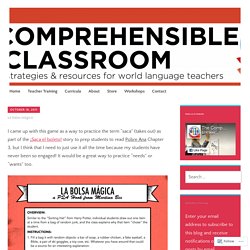 Story to prep students to read Pobre Ana Chapter 3, but I think that I need to just use it all the time because my students have never been so engaged! It would be a great way to practice “needs” or “wants” too. First, I took a bag and filled it with random objects: a bar of soap, a rubber chicken, a fake eyeball, a Bible, a pair of ski goggles, a toy cow, etc. Whatever you have around that could be the source for an interesting explanation.

Then, I told my students that it is a magic bag because it knows what you need (you could say that it knows what you want). Students took turns closing their eyes, reaching into the bag, and pulling out an object. Some things that came out of the bag today were… The First Week Of Trying To Stay In The TL With Your Students. Need ideas for what to do on the first days of staying in the target language with your students? 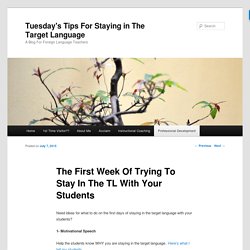 1- Motivational Speech Help the students know WHY you are staying in the target language. Here’s what I tell my students. 2- Motivational Structure Hearing ONLY L2 takes patience and determination on the part of the learners. Workshops. Learn TPRS and TCI skills and techniques step by step Learn with a pro, learn with an expert! 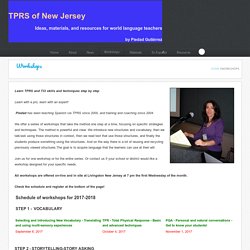 Piedad has been teaching Spanish via TPRS since 2000, and training and coaching since 2004. We offer a series of workshops that take the method one step at a time, focusing on specific strategies and techniques. The method is powerful and clear. We introduce new structures and vocabulary, then we talk/ask using those structures in context, then we read text that use those structures, and finally the students produce something using the structures. Join us for one workshop or for the entire series. All workshops are offered on-line and in site at Livingston New Jersey at 7 pm the first Wednesday of the month. You Are Now Playing the Long Game  So you’ve had The Experience. 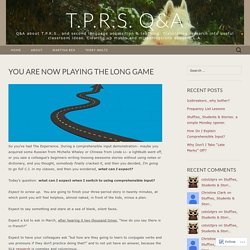 During a comprehensible input demonstration– maybe you acquired some Russian from Michelle Whaley or Chinese from Linda Li– a lightbulb went off, or you saw a colleague’s beginners writing loooong awesome stories without using notes or dictionary, and you thought, somebody finally cracked it, and then you decided, I’m going to go full C.I. in my classes, and then you wondered, what can I expect?

Today’s question: what can I expect when I switch to using comprehensible input? Expect to screw up. You are going to finish your three-period story in twenty minutes, at which point you will feel helpless, almost naked, in front of the kids, minus a plan. Expect to say something and stare at a sea of blank, silent faces. Expect a kid to ask in March, after hearing it two thousand times, “how do you say there is in French?”

Certificate in Language Teaching with Technology Division of Continuing Education. TPRS Professional Learning Community. If you would like to receive coaching from TPRS expert Ben Slavic to improve your TPRS teaching skills, and if you would like to be a part of a private, active, and supportive community of other "like minded" TPRS teachers that care about one another and help each other to be successful, then a membership to Ben's "Professional Learning Community" is for you! 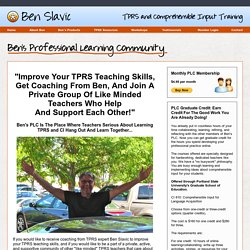 Ben's Professional Learning Community is the place where Ben conducts coaching and shares information on TPRS and CI with an interactive community of teachers from all over the world. This private membership allows Ben and the teachers who are members to share information on TPRS and CI without the risk of attack, which did happen when Ben had a public blog. This is the only private TPRS community of it's kind in the world! When You Become A PLC Member, You Will Enjoy These Benefits... Access to all of Ben's current articles and PLC member comments. 4 CI Strategies from CI Liftoff. I don't think anyone would call me a TPRS teacher, though I've certainly dabbled in comprehensible input for years, and I will gladly sip some CI Kool-Aid when offered a fresh serving, whether through organized national conferences or a workshop conveniently passing through my home state. 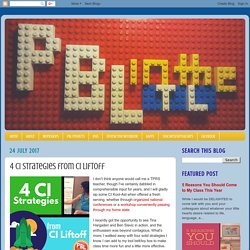 I recently got the opportunity to see Tina Hargaden and Ben Slavic in action, and the enthusiasm was beyond contagious. NTPRS 2017. NTPRS 2017. Making the First Day of School AWESOME. Jason Fritze rocks! – MJ's Comprehensible Input. I tried the Jason Fritze idea of having kids sit in quiet groups of four, glued to their New Houdini books, writing questions and answers. 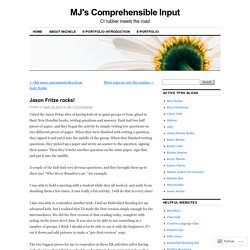 Each had two half pieces of paper, and they began the activity by simply writing two questions on two different pieces of paper. When they were finished with writing a question, they signed it and put it into the middle of the group. When they finished writing questions, they picked up a paper and wrote an answer to the question, signing their names. Then they’d write another question on the same paper, sign that, and put it into the middle. A couple of the kids had very devious questions, and they brought them up to show me! Rubrics - Cascadia CI Resources. Reflection: edcampCIVa! – Maris Hawkins. 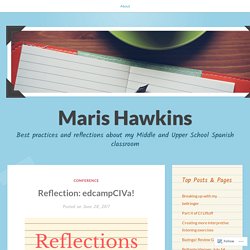 Yesterday was a great day! We had 33 teachers come who were excited to learn and share more about edcamp and comprehensible input. Not only that- but we had teachers come from West Virginia and Raleigh, NC all the way to Chesapeake. Overall, we were all looking to connect with teachers who were on the same path that we are.

We covered many topics that I have been tossing around, and it was reassuring to see that many teachers were doing the same thing that I did… and no one had all of the answers! 10 Ways to Get your Spanish Class Moving. Now that I have a deskless classroom there is so much room for activities! 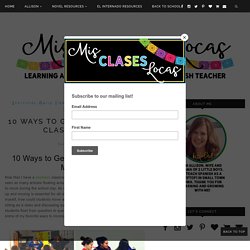 I have seen so many articles floating around lately about how important it is for students to move during the school day. As we get to the end of the year getting students up and moving is essential for all of those pent up wiggles. I have started asking myself, how could students move while doing this activity? 9 ways to increase students' TL use. This summer I wrote a post on increasing your own TL use and am just now getting around to this follow-up post. Students need to practice speaking the TL in order to develop the skill of speaking it; that goes without saying. But because of the affective filter more than anything, and a host of other factors including pure lack of knowledge, it's a constant battle to get them to do so. Here are some tips that have worked in my classroom to get students speaking more. 1.

Why Are You Passionate about Teaching with Easy Novels? Q&A – discoveringci. It is the end of the school year!! Hurray! I finally have had time to sit with some colleagues and chat. The Notebook - My Journey in language Teaching. Level 1. I would like to give a clear explanation for my level 1 goals and an explanation of how to plan and pace your year using this site. Goal-My overall goal for level 1 is for students to acquire the 100 most frequently used structures (verbs), while in the meantime acquiring … There are so many different ways to start the year.

Building an Inspired Language Classroom. Jasonslanguageideas - home. All my Spanish 2016-17 resources. Ok, so I like to be transparent with my teaching. I am not perfect and don't claim to be. For me it's about the journey and wonder of learning the language in pieces with my students. This year went well considering the following challenges: Spanish 2 students were all over the place in ability when they got to my classSpanish 1 students were those whotransferred into school systemdidn't get good enough grades to take Spanish 1 in middle schoolstudents who had previously failed Spanish 1my going back to 50 minute periods after 3 years of 90 minute every other day blockbeing at a new school (zero street cred)new district mandated curriculum ("cough textbook chapters cough") Don't get me wrong, there were also SO many positives. One of my favorite stories: Ferdinando el Toro. You may have seen that Ferdinando el toro is being made into a movie.

I am very excited about that and will definitely use it in the future, but in the meantime, I love using the Disney short film to start my unit about Bianca Nieves y los siete toritos, a novel by Carrie Toth. Spanish – cireading. Sub Plans that keep the CI Flowing. Eduardo García’s Path: Migrant Worker, Convict, Deportee, Star Chef - NYTimes.com. Justin Slocum Bailey. Months ago, I witnessed a classically ineffective language learning lesson. Comprehensible input strategies. Profa Baros's Classroom. These lessons are designed using the theory of Comprehensible Input. Transitioning a department to TPRS/CI ...my first thoughts. So, at the end of last year, I saw a need. I'm the kind of person who, for better or for worse, tries to solve problems. What Is My Daily Intro Routine? Scientific research on TPRS - TPRS Academy & The CI Bookshop. On this page we present scientific research on (aspects of) TPR Storytelling.

An easier way to learn a language? This is what research says. It's hard, but not impossible. How Well Do TPRS Students Do On The AP. Short Stories for Oral Spanish - Anna Woods Ballard, Charles Oran Stewart - Google Books. MJ's Comprehensible Input. Thief! A game to practice physical descriptions and direct object pronouns – The Comprehensible Classroom. I shared this game on my blog many years ago, and I’m posting it an updated version today since it is so buried in the archives. Lesson/Unit Plan Document.