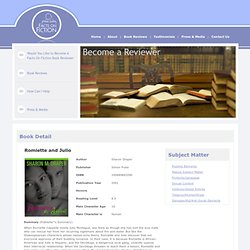 It was full of possibilities and unanswered questions…” p. 8 Romiette’s mother “never frowns, never yells, and never loses her cool…” p. 24 When Julio hits Ben because he’s angry at something else (see Violence and Illegal activity) Ben is able to see past that. “’I could see you had some issues that had nothing to do with me.’” Romiette and Julio Tests and Worksheets - All Grades. Romiette and Julio Test Review Questions. Romiette and Julio Literature Unit - activities, vocabulary, quizzes, and more. The Story in Their Eyes by stratton wayne st.clair. 10 Fascinating Interracial Marriages in History. History Attitudes towards Interracial marriage have changed dramatically, in just the last generation. 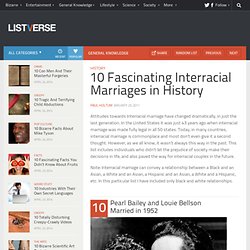 In the United States it was just 43 years ago when interracial marriage was made fully legal in all 50 states. Today, in many countries, interracial marriage is commonplace and most don’t even give it a second thought. However, as we all know, it wasn’t always this way in the past. This list includes individuals who didn’t let the prejudice of society make their decisions in life, and also paved the way for interracial couples in the future. What Interracial and Gay Couples Know About 'Passing' - Angela Onwuachi-Willig.

As I awaited news of the U.S. 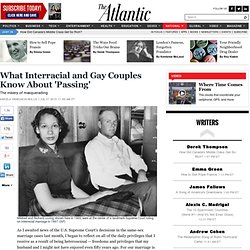 Supreme Court's decisions in the same-sex marriage cases last month, I began to reflect on all of the daily privileges that I receive as a result of being heterosexual -- freedoms and privileges that my husband and I might not have enjoyed even fifty years ago. For our marriage is interracial. Given my own relationship, I often contest anti-gay marriage arguments by noting the striking similarities between arguments that were once also widely made against interracial marriage. FAQ's ~ Interracial Relationship. Romiette and Julio by NLHS English on Prezi. HSLL.T2.SJ.Romiette.indd. Theme. Students' perceptions of violence in the public schools: The metLife survey. Original article Department of Health Promotion and Human Performance, University of Toledo, Toledo, Ohio, USA Accepted 27 October 1994, Available online 28 December 1999 Choose an option to locate/access this article: Check if you have access through your login credentials or your institution Check access. 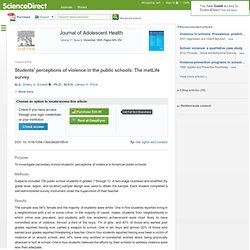 Good Kids, Mad City - An Exploration of the Recent Gang Violence in Chicago. What is Bullying. Aggressive behavior may be bullying depending on what happened, how often it happens and who it happens to. 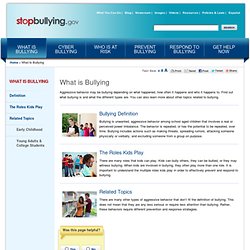 Bullying. Banner in a campaign against bullying in Cefet-MG. 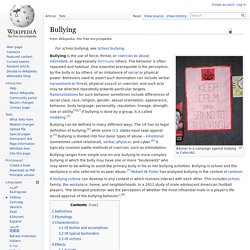 Bullying can be defined in many different ways. The UK has no legal definition of bullying,[4] while some U.S. states have laws against it.[5] Bullying is divided into four basic types of abuse – emotional (sometimes called relational), verbal, physical, and cyber.[6] It typically involves subtle methods of coercion, such as intimidation. Bullying ranges from simple one-on-one bullying to more complex bullying in which the bully may have one or more "lieutenants" who may seem to be willing to assist the primary bully in his or her bullying activities. Wooden_canoe_sharbot_lake_ontario. Romeo and Juliet. An 1870 oil painting by Ford Madox Brown depicting Romeo and Juliet's famous balcony scene Romeo and Juliet is a tragedy written by William Shakespeare early in his career about two young star-crossed lovers whose deaths ultimately reconcile their feuding families. 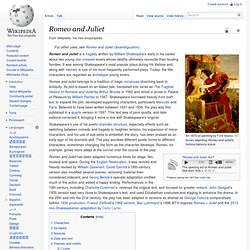 It was among Shakespeare's most popular plays during his lifetime and, along with Hamlet, is one of his most frequently performed plays. Today, the title characters are regarded as archetypal young lovers. Shakespeare's use of his poetic dramatic structure, especially effects such as switching between comedy and tragedy to heighten tension, his expansion of minor characters, and his use of sub-plots to embellish the story, has been praised as an early sign of his dramatic skill. The play ascribes different poetic forms to different characters, sometimes changing the form as the character develops. Characters Synopsis Meanwhile, Benvolio talks with his cousin Romeo, Montague's son, about Romeo's recent depression. 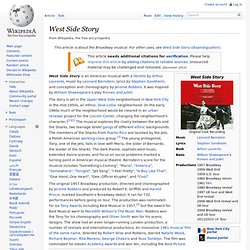 It was inspired by William Shakespeare's play Romeo and Juliet. Background[edit] Genesis[edit] In 1947, Jerome Robbins approached Leonard Bernstein and Arthur Laurents about collaborating on a contemporary musical adaptation of Romeo and Juliet. He proposed that the plot focus on the conflict between an Irish Catholic family and a Jewish family living on the Lower East Side of Manhattan,[5] during the Easter–Passover season. Collaboration and development[edit] The original book Laurents wrote closely adhered to Romeo and Juliet, but the characters based on Rosaline and the parents of the doomed lovers were eliminated early on. Production period[edit] West Side Story-America. 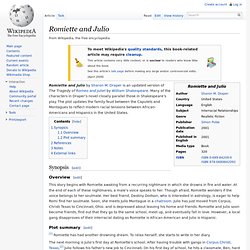 Draper is an updated version of The Tragedy of Romeo and Juliet by William Shakespeare. Many of the characters in Draper's novel closely parallel those in Shakespeare's play. The plot updates the family feud between the Capulets and Montagues to reflect modern racial tensions between African-Americans and Hispanics in the United States. Synopsis[edit] Overview[edit] Welcome to the Official Site of Sharon Draper.

Reviews: A contemporary retelling of the Romeo and Juliet story with a happy, upbeat ending. 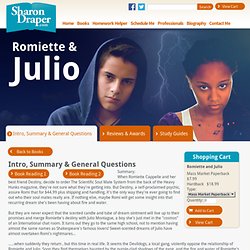 Sixteen-year-old Julio Montague's parents have moved their family to Cincinnati, OH, in order to get their son out of his gang-ridden high school in Corpus Christi, TX. Romiette Cappelle, also 16, is the daughter of successful African American parents and the granddaughter of college professors. When these two young people, both from proud heritages, begin a romance, they must deal not only with their parents' prejudices but also with the threats of a local gang called The Family. Romiette and Julio by Sharon M. Draper. Romiette and Julio Trailer.mov. Romiette and Julio Summary - Sharon M. Draper. Sharon Draper's Romiette and Julio opens with Romiette's recurring dream. Deathly afraid of water, Romiette is drowning in her dream. As she struggles to surface, she feels the water pull her back down until she hears a man's voice.