"Lasso that ullage." --The Angel of Death 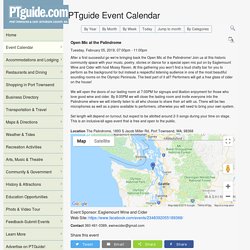 Join us at this historic community space with your music, poetry, stories or dance for a special open mic put on by Eaglemount Wine and Cider with host Mossy Raven. At this gathering you won't find a loud chatty bar for you to perform as the background for but instead a respectful listening audience in one of the most beautiful sounding rooms on the Olympic Peninsula. The best part of it all? Performers will get a free glass of cider on the house! We will open the doors of our tasting room at 7:00PM for signups and libation enjoyment for those who love good wine and cider.

Set length will depend on turnout, but expect to be allotted around 2-3 songs during your time on stage. Palindrome Championship Documentary Releases First Trailer. Website: To finance the final phases of post-production as well as manufacture and distribution of the film, the Producers are launching an Indiegogo campaign today. 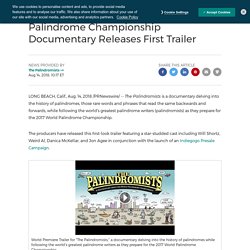 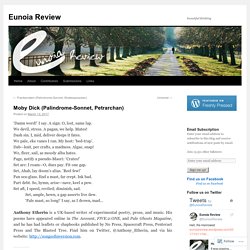 I say. A sign: O, lost, same lap. Palindrome-Sestina. A line-unit palindromic poem for Douglas Hofstadter. (Originally published here) Since it first came out in 1979, Douglas Hofstadter’s Pulitzer Prize-winning book “Gödel, Escher, Bach: An Eternal Golden Braid” has widened the eyes of multiple generations of nerdy kids, and I was certainly no exception. 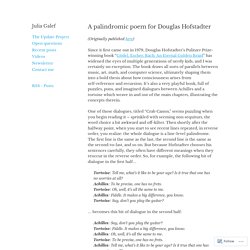 The book draws all sorts of parallels between music, art, math, and computer science, ultimately shaping them into a bold thesis about how consciousness arises from self-reference and recursion. Some word-unit ones. Dr. Stephens' Star Crossed Stanzas. Satire: veritas. Have you ever tried to write a palindrome that made sense?

"According to his grandson, Daniel, Stephens has 'added it it fairly considerably over the years' and hopes to publish the expanded version in the near future." (2013) via (pdf) – graywyvern

You know, one of those sentences that is identical when read forward and backward. 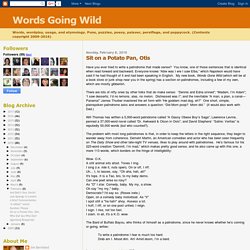 Everyone knows “Able was I ere I saw Elba,” which Napoleon would have said if he had thought of it and had been speaking in English. 2 palindromic sonnets in french. Hymn to the moon. As a child I was very taken with anagrams and palindromes and similar wordplay. 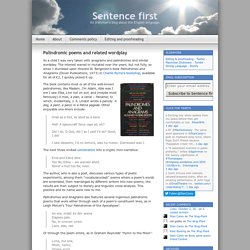 The interest waned or mutated over the years, but not fully, so when I stumbled upon Howard W. Basho’s Bed. Set a ballade– Be not sad. 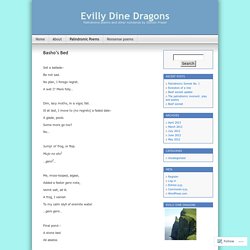 No plan, I forego regret. A wet I? Mere folly… At bletchley park. The critically lauded film The Imitation Game just won an Oscar for Graham Moore's screenplay, adapted from Alan Turing: The Enigma by Andrew Hodges. 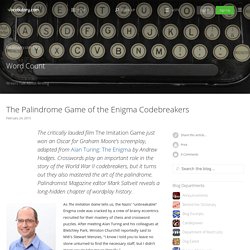 Crosswords play an important role in the story of the World War II codebreakers, but it turns out they also mastered the art of the palindrome. Palindromist Magazine editor Mark Saltveit reveals a long-hidden chapter of wordplay history. As The Imitation Game tells us, the Nazis' "unbreakable" Enigma code was cracked by a crew of brainy eccentrics recruited for their mastery of chess and crossword puzzles. Moth Ash. 1st world palindrome championship. Grand Prize Winners First Place: JFK Talking Tough, by Jeff Grant (23 points) 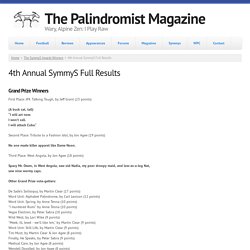 A palindromic tanka. Palindromic Haiku. A syllable-palindrome haiku i wrote. Perhaps the greatest. Some line palindromes by j a lindon. "As I Was Passing As I was passing near the jail I met a man, but hurried by. 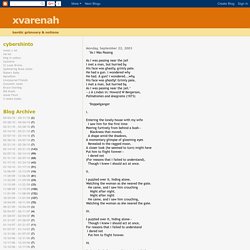 His face was ghastly, grimly pale. He had a gun. I wondered why He had. WEIRD AL YANKOVIC LYRICS - Bob. "Bob" I, man, am regal - a German am I Never odd or even If I had a hi-fi Madam, I'm Adam Too hot to hoot No lemons, no melon Too bad I hid a boot Lisa Bonet ate no basil Warsaw was raw Was it a car or a cat I saw? Rise to vote, sir Do geese see god? "Do nine men interpret? " "Nine men," I nod Rats live on no evil star Won't lovers revolt now? Return to the Palindrome of the Real.

Perhaps the most profound criticism ever attempted on palindromes. – graywyvern

Myth by Natasha Trethewey. I was asleep while you were dying. It’s as if you slipped through some rift, a hollow I make between my slumber and my waking, the Erebus I keep you in, still trying not to let go. In sanskrit. Antisymmetrical Palindromes in Traditional European and Contemporary Russian Poetry. Palindrome Semiotics. A Chronotope of Revolution: The Palindrome from the Perspective of Cultural Semiotics By Erika Greber (Univ. of Munich / UC Irvine) In the following abstract, I propose to analyze the palindrome in terms of cultural semiotics and to explore the subliminal semantic concepts and metaphorological implications which are involved in the genre's postmodern renaissance and which articulate certain political anxieties (something which applies especially to the recent rise of palindrome writing and criticism in Russian, German and Serbo-Croatian literatures). (2) The palindrome, a special, restricted case of anagram, foregrounds the principle of letter permutation by its strictly sequential proceeding and thus has become the prototype and symbol of anagrammatic letter revolution (in Greek: anagrammatismos, in Latin: revolutio).

The idea of the palindrome is closely associated with the material and corporeal aspect of verbal signification. Lost generation & also some jesus. I was paging through Kenda Dean's, "Ascension Deficit Disorder: Youth Ministry as a Laboratory for Hope," when I read of the form of creative writing that took YouTube by storm in 2007. It's called "Reverse Thinking. " AARP had launched a contest called, U@50, where youth contestants were to create a video that depicted what life would be like for them upon eligibility to this senior organization. Jonathan Reed, who would place second, submitted his poem, "Lost Generation. " The masterpiece can be read backwards and forwards, right-way-up and upside-down, with completely different meanings. When read top-to-bottom, the future is bleak and heart-breaking at best. It was early into the first-century A.D. when a Jewish revolutionary, unconventional rabbi, prophetic story-teller named Jesus began to proclaim his own alternative vision for the world.

Said differently, Jesus was the first one to drop reverse thinking as a creative and incarnated art form. The last shall be first. Another palindrome poet of note. Doc Drumheller10 × (10 + −10) = 0 The Republic of Oma Rāpeti Press, 2014 200 pp. $30 (N.Z.) New Zealand poet Doc Drumheller’s new book, the trickily titled 10 × (10 + −10) = 0, is part conceptual mindbender, part highly-charged political rant. It is often the case that conceptual poetry is not meant to be read, and that political poetry barely needs to be read, but Drumheller has created something that is worth trying to read. But it is not easy. The book takes some explaining. 10 × (10 + −10) = 0 comprises ten individual volumes, some published separately, written over ten years.