I am to Langpo as a Sufi is to Islam.

Language poetry remembered. It must have been in 1979: I picture it happening at Books & Co. on Manhattan’s Upper East Side, though such is the unreliability of memory that it could have been in the Diamond District at the Gotham Book Mart. 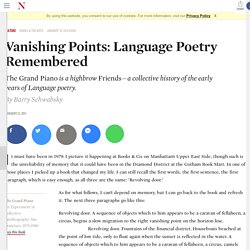 In one of those places I picked up a book that changed my life. I can still recall the first words, the first sentence, the first paragraph, which is easy enough, as all three are the same: "Revolving door. " As for what follows, I can’t depend on memory, but I can go back to the book and refresh it. The next three paragraphs go like this: Revolving door. Here was writing that seemed totally new to me, yet at the same time answered some of my strongest implicit demands of poetry—which it clearly was, with its cumulative structure based on repetition. That book was Ron Silliman’s Ketjak. The audients of politics in the –torium sounds eye is for fours is thus tragedy first then farce, majestic speech muttered under morning’s breath Not exactly.

Eleana Kim on Language Poetry 1. Language Poetry: Dissident Practices and the Makings of a Movement This essay was written in 1994 and, with the exception of minor editing for clarity, has not been rewritten. 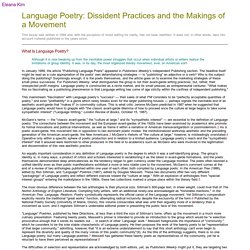 It does not, in other words, take into account material published in the years since. What Is Language Poetry? Although it is now breaking up from the inevitable power struggles that occur when individual artists or writers realize the limitations of group identity, it was, in its day, the most organized literary movement, ever, on American soil1 In January 1989, the article "Publishing Language Poets" appeared in Publishers Weekly’s Independent Publishing section. The headline itself might be read as a cute appropriation of the poets’ own defamiliarizing strategies — is "publishing" an adjective or a verb? Jump To What Is Language Poetry? [Back to Readme] PENTERACT PRESS – Publisher of Experimental Poetry Leaflets & Chapbooks. Spineless Books. Cadaeic.net. Tender buttons. Flarf. To this day, wherever I meet Poetry readers they want to talk to me about flarf and what I think about it. 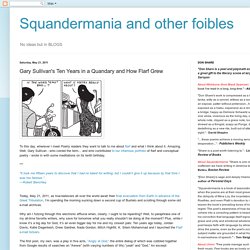 Amazing. Well, Gary Sullivan - who coined the term... and who contributed to our infamous portfolio of flarf and conceptual poetry - wrote in with some meditations on its tenth birthday. “It took me fifteen years to discover that I had no talent for writing, but I couldn’t give it up because by that time I was too famous.”

—Robert Benchley Today, May 21, 2011, as true-believers all over the world await their final evacuation from Earth in advance of the Great Tribulation, I’m spending the morning sucking down a second cup of Bustelo and scrolling through some old e-mail archives. Why am I futzing through this electronic effluvia when, clearly, I ought to be repenting? The first post, my own, was a play in five acts, “Angry at God,” the entire dialog of which was cobbled together from Google results of searches on “Awww” (with varying numbers of Ws) “yeah” and “God.

. ” … and so on. Neo-oulipo. The Procedural Poetries of Joan Retallack Brian Lennon considers the aesthetic that Retallack has evolved out of a cybernetic sensibility - a formalism that does not impose authoritarian codes or repressive orders, but rather hacks a pattern out of the sheer data of everyday life: directories, menues, phone books, indexes, encyclopedia, and archives "Thorowly" American: Susan Howe's Guide to Orienteering in the Adirondacks Elisabeth Joyce reads Howe as a postfeminist Thoreau facing the dilemma that 'to inhabit a wilderness is to destroy it' British Poetry at Y2K John Matthias reports on the state of British poetry and its criticism (first in a series of overview essays for the year 2000) the third fold: critical ecologies --------------------------------------- Consilience Revisited Laura Dassow Walls reconsiders Consilience and finds E. 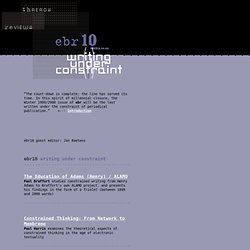 It remains to be seen whether later langpo surpasses this peak. – graywyvern