Calais children: Children without UK links among 70 new arrivals. Image copyright PA The first group of unaccompanied children without family ties to the UK have arrived in Britain from the migrant camp in Calais. 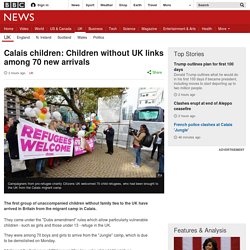 They came under the "Dubs amendment" rules which allow particularly vulnerable children - such as girls and those under 13 - refuge in the UK. They were among 70 boys and girls to arrive from the "Jungle" camp, which is due to be demolished on Monday. It followed the first wave of 39 boys on Monday - who all had UK relatives. Their arrival prompted controversy in several newspapers and criticism from Monmouth MP David Davies, with suggestions that some of them looked older than 18. Mr Davies suggested young migrants should have their teeth tested to verify their ages. French police clashes at Calais 'Jungle' Scaffolding and sheets have since been erected around the entrance to the building in Croydon, south London, where today's arrivals were taken, to shield them from the media. 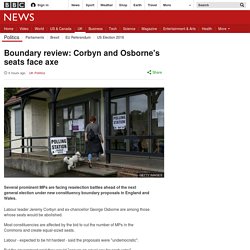 Labour leader Jeremy Corbyn and ex-chancellor George Osborne are among those whose seats would be abolished. Week ahead. Image copyright Getty Images The torch of government has been passed to a new generation of ministers and all kinds of policies are changing. 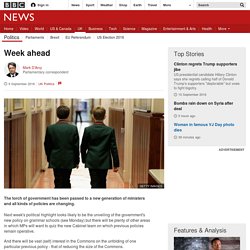 Next week's political highlight looks likely to be the unveiling of the government's new policy on grammar schools (see Monday) but there will be plenty of other areas in which MPs will want to quiz the new Cabinet team on which previous policies remain operative. And there will be vast (self) interest in the Commons on the unfolding of one particular previous policy - that of reducing the size of the Commons. When the Boundary Commission unveils its proposals for the re-drawing of the map of parliamentary seats on Tuesday, it will become clear which MPs will have to fight for their political survival, and with whom.

Previously amicable neighbours may suddenly become rivals as their seats are merged or abolished, with an unpredictable impact on party discipline across the House. Politicians may leave the Houses of Parliament for six years. Rbyn: Labour will seek to block grammar school changes. Houses of Parliament should be sold off, Labour MP says. Image copyright AP The Palace of Westminster should be turned into a museum and parliament moved to Manchester, an MP has said. 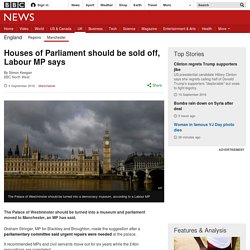 Graham Stringer, MP for Blackley and Broughton, made the suggestion after a parliamentary committee said urgent repairs were needed at the palace. It recommended MPs and civil servants move out for six years while the £4bn renovations are completed. The Labour MP said if civil servants did not want to move their lives north that was "up to them". Privatise the palace Spending £4bn "on an old building in London" was "absurd", said Mr Stringer, who suggested a permanent relocation. Free votes in the House of Commons since 1997. Limiting Lords powers 'calls its future into question' The future of the House of Lords would be called into question if ministers press ahead with plans to curtail its powers, the Lord Speaker has said. 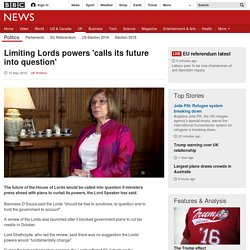 Baroness D'Souza said the Lords "should be free to scrutinise, to question and to hold the government to account". A review of the Lords was launched after it blocked government plans to cut tax credits in October. Lord Strathclyde, who led the review, said there was no suggestion the Lords' powers would "fundamentally change". During the last parliamentary session, the Lords inflicted 60 defeats on the government, including several changes to the housing bill last week. The role of the Whips in Parliament.

Fictional accounts of the work of a parliamentary whip can portray a mysterious world of intrigue, but what really goes on behind the scenes? 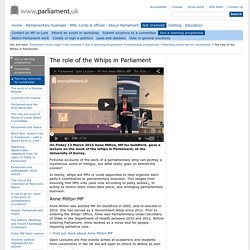 In reality, whips are MPs or Lords appointed to help organise each party's contribution to parliamentary business. This ranges from ensuring that MPs vote (and vote according to party wishes), to acting as tellers when votes take place, and arranging parliamentary business. Anne Milton MP Anne Milton was elected MP for Guildford in 2005, and re-elected in 2010. She has served as a Government Whip since 2012. Find out more about Anne Milton MP Open Lectures are free events aimed at academics and students from universities in the UK but are open to others to attend as well. A Point of View: Who should sit in the House of Lords? Image copyright Getty Images Many people think that the House of Lords needs change but nobody can agree how or even why. 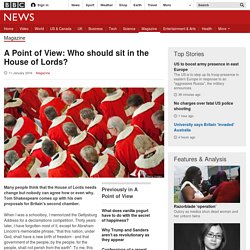 Tom Shakespeare comes up with his own proposals for Britain's second chamber. When I was a schoolboy, I memorized the Gettysburg Address for a declamations competition. Thirty years later, I have forgotten most of it, except for Abraham Lincoln's memorable phrase, "that this nation, under God, shall have a new birth of freedom - and that government of the people, by the people, for the people, shall not perish from the earth". To me, this summation is not mere rhetoric. The House of Lords reform debate has been going on for more than a century. So far, so familiar. Tata Steel: No 10 rejects Labour call to recall Parliament. Conservatives, Europe and the risks of a disunited party. I have come full circle. 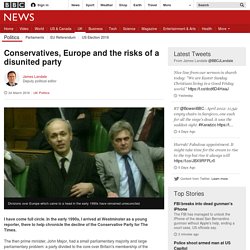 In the early 1990s, I arrived at Westminster as a young reporter, there to help chronicle the decline of the Conservative Party for The Times. The then prime minister, John Major, had a small parliamentary majority and large parliamentary problem: a party divided to the core over Britain's membership of the European Union, divisions that were under laid by deep-set personal feuds, all the while potential successors for the leadership circled and plotted and agitated against Downing Street. One key player in all this was a young Eurosceptic MP called Iain Duncan Smith. More than two decades on, as I prepare to leave Westminster, I am overwhelmed by a wave of nostalgia as the years fall away. There are, of course, limits to the parallel. But the divisions over the EU remain as strongly held as ever, and they are divisions that have remained unreconciled ever since.

Tory purpose So enter Mr Duncan Smith and his dramatic resignation. Image copyright PA. Sunday trading defeat for government as MPs reject changes. Plans to overhaul Sunday trading laws in England and Wales have been dropped after they were rejected by MPs. 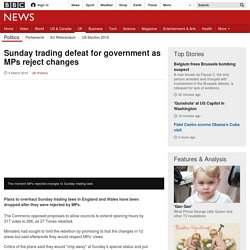 How does David Cameron avoid Commons defeats? Image copyright AFP Where are the rebellions? 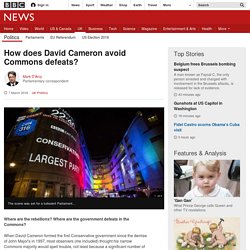 Where are the government defeats in the Commons? When David Cameron formed the first Conservative government since the demise of John Major's in 1997, most observers (me included) thought his narrow Commons majority would spell trouble, not least because a significant number of Tory backbenchers had acquired quite a taste for rebellion during the coalition years. But so far, barring one admittedly stinging lost amendment on EU referendum purdah rules, there has been no repetition of the prime minister's abject and almost unprecedented humiliation in the 2013 vote on military intervention in Syria.

Even the increasingly snippy Euro-feuding in Tory ranks has not endangered that majority. Who needs the House of Lords? Meet the peers rattling the Commons. It is late October in the House of Lords and the chamber is full. The peers squeeze on to benches, or crowd four deep around the throne. The government has threatened to suspend the Lords, which is about to debate the abolition of tax credits. It is not the first time this House, which was last suspended by Oliver Cromwell, has faced an existential threat. You could say it is part of its remit.

The chamber was designed by Augustus Pugin who, shortly afterwards, went mad. House of Lords votes to keep income-related child poverty measures. The House of Lords has voted to keep targets aimed at reducing child poverty, forcing the government to reconsider its plan to abolish them. The bishop of Durham, supported by Labour and the Liberal Democrats, led the effort to retain the targets, which measure material poverty, and were set to be scrapped under the welfare reform and work bill. Iain Duncan Smith, the work and pensions secretary, announced the proposals in July, prompting dismay among child poverty charities. He said the government would scrap its measurement of child poverty and the aim to eradicate it by 2020, while replacing it with a new duty to report levels of educational attainment, worklessness and addiction. Under his plans, the old measurement, based on the percentage of households with below-average income, would continue to be published as a government statistic but would no longer be seen as a target.

Who's who: Labour shadow cabinet in full. Here is a full list of Labour's shadow cabinet, following party leader Jeremy Corbyn's reshuffle. Leader of the Opposition - Jeremy Corbyn The veteran Labour MP for Islington North was elected party leader with nearly 60% of the vote in the wake of the party's 2015 election defeat. A left-winger first elected to Parliament in 1983, Mr Corbyn championed a range of causes such as unilateral nuclear disarmament and opposition to military intervention abroad that, during the 1990s and noughties, left him on the fringes of the party. But his anti-austerity message and the support of new members propelled him to a shock victory.

Since becoming leader, he has brought a different tone to Prime Minister's Questions but faced dissent from within Labour over issues such as Syria and Trident. Deputy leader, party chair and shadow Cabinet Office minister - Tom Watson Image copyright Getty Images Shadow first secretary of state, shadow business, innovation and skills secretary - Angela Eagle. The Guardian view on David Cameron and the House of Lords: more peers and fewer MPs equals a broken system. Speculation that Downing Street plans to make up to 40 new life peers in July after the EU referendum, most of them Conservatives, should be taken seriously.

David Cameron has the means (the prime ministerial patronage system), the motive (stopping the government defeats in the Lords), and the opportunity (he may not be prime minister by summer 2017) to do this. He also has past form on stuffing the Lords. All this makes the stories this week depressingly credible. The move should be stopped in its tracks by the body that has the power and responsibility to do so: the House of Commons. The case against more peerages could start and end with the argument that it is morally wrong for the head of government to appoint the legislature. Private Members' Bills: 'Awkward squad' MPs strike again. Another Friday, another Private Members Bill smothered by procedural means. Last week it was Julie Cooper's bill to provide cheap hospital parking for carers; this week the victim was Nick Thomas Symonds' Off Patent Drugs Bill.

Tax credits: Lords vote to delay controversial cuts - BBC News. Tax credits vote: PM accuses Lords of breaking constitutional convention. House of Lords: 100 years of strife - BBC News. EU referendum: Tory MPs plot revolt in vote on 'purdah' rules - BBC News. Queen's Speech 2015: Bill-by-bill - BBC News. The tragedy of the Commons: MPs are too busy to do their jobs. Queen's speech 2015: a bill-by-bill guide to the next parliament. Who would be a Member of Parliament? - BBC News. Vellum use for Parliamentary records and bills - BBC News.