10. 4D Printing Technology. Revolutionizing Material Form and Control with 4D Printing an Academic Project in Collaboration with Stratasys In a unique research collaboration between Stratasys’ Education, R&D departments and MIT’s Self-Assembly Lab, a new process is being developed, known as 4D Printing. 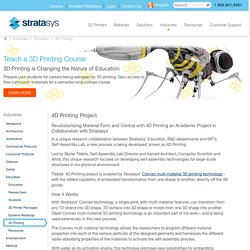 Led by Skylar Tibbits, Self-Assembly Lab Director and trained Architect, Computer Scientist and Artist, this unique research focuses on developing self-assembly technologies for large-scale structures in our physical environment. Tibbits’ 4D Printing project is enabled by Stratasys’ Connex multi-material 3D printing technology - with the added capability of embedded transformation from one shape to another, directly off the 3D printer. How it Works With Stratasys’ Connex technology, a single print, with multi-material features, can transform from any 1D strand into 3D shape, 2D surface into 3D shape or morph from one 3D shape into another. Future Applications. The future unfolding: Fellows Friday with Skylar Tibbits. Skylar Tibbits makes things that assemble themselves, with potential large-scale applications from self-adjusting water pipes to self-assembling structures in space. 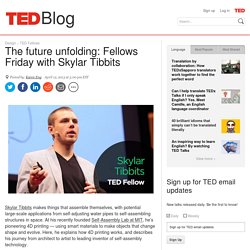 At his recently founded Self-Assembly Lab at MIT, he’s pioneering 4D printing — using smart materials to make objects that change shape and evolve. Here, he explains how 4D printing works, and describes his journey from architect to artist to leading inventor of self-assembly technology. Why is this process called 4D printing? The reason we call it 4D is because the object changes over time. The%20Third%20Industrial%20Revolution. The third industrial revolution. THE first industrial revolution began in Britain in the late 18th century, with the mechanisation of the textile industry. 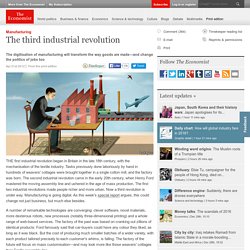 Tasks previously done laboriously by hand in hundreds of weavers' cottages were brought together in a single cotton mill, and the factory was born. The second industrial revolution came in the early 20th century, when Henry Ford mastered the moving assembly line and ushered in the age of mass production. The first two industrial revolutions made people richer and more urban. Now a third revolution is under way. 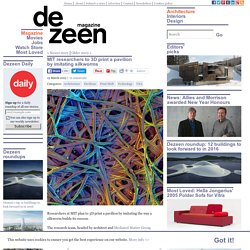 The research team, headed by architect and Mediated Matter Group founder Neri Oxman, attached tiny magnets to the heads of silkworms to discover how they “print” their pupal casings around themselves. Iris van Herpen Print Shift interview. Fashion designer and 3D printing pioneer Iris van Herpen tells us how printing and scanning technologies could transform the fashion industry in an exclusive interview for our print-on-demand publication Print Shift. 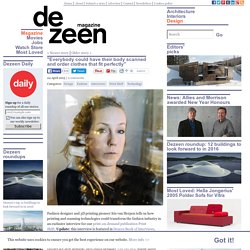 Update: this interview is featured in Dezeen Book of Interviews, which is on sale now for £12 (+ transcript). Avi Reichental: What’s next in 3D printing. Noble, Jessica, 6 Months. 3D Printing, Craft and the Bespoke Designer.pdf. Thomas Heatherwick: Mr Big Idea. Thomas Heatherwick’s studio is inspiring and curious from the minute you step off Gray’s Inn Road and walk through its iron gates. 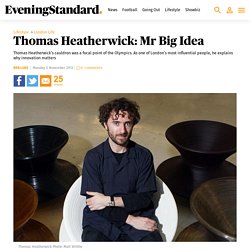 Everywhere there are objects and strange materials, many displayed in wooden cubbyholes hanging from the ceiling, from clusters of metal discs and crumpled steel to a bull’s horn, a huge ball of string and a grey squirrel in a belljar. These are the sorts of materials that can inspire the 42-year-old architect and designer who in the last year has caught our collective imagination in ways he never dreamed.

The moment the petals of the Olympic cauldron he designed rose to their fiery crescendo and took our breath away on the night of July 27 was as memorable as many of the sporting dramas that played out over the following month. Mass Customization with 3D Printing. London-based firm Digital Forming enables customers to co-design their own 3D printed products – anything from a mobile phone case to an espresso cup or a silver ring. 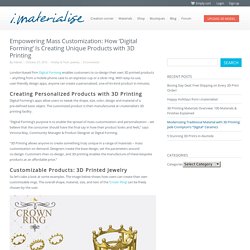 With easy-to-use, user-friendly design apps, anyone can create a personalized, one-of-its-kind product in minutes. Creating Personalized Products with 3D Printing Digital Forming’s apps allow users to tweak the shape, size, color, design and material of a pre-defined basic object. The customized product is then manufactured at i.materialise’s 3D printing facility. 3D Printing: The Next 25 Years. This year’s ASME North American Additive Manufacturing + 3D Printing Conference (AM3D), Boston, Massachusetts will be held August 2-5, 2015 and focus on the engineering behind additive technologies. 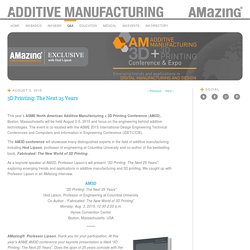 The event is co-located with the ASME 2015 International Design Engineering Technical Conferences and Computers and Information in Engineering Conference (IDETC/CIE). The AM3D conference will showcase many distinguished experts in the field of additive manufacturing including Hod Lipson, professor of engineering at Columbia University and co-author of the bestselling book, Fabricated: The New World of 3D Printing.

As a keynote speaker at AM3D, Professor Lipson’s will present “3D Printing: The Next 25 Years”, exploring emerging trends and applications in additive manufacturing and 3D printing. We caught up with Professor Lipson in an AMazing interview. AMazing®: Professor Lipson, thank you for your participation. MAR CLT6965 3D Printing White paper. A Legal and Empirical Study into the Intellectual Property Implications of 3D Printing Exec Summary Web. Manufacturing: The third industrial revolution. Artist Created This 3D Printed Swimsuit. SurveyMonkey - Connexion. 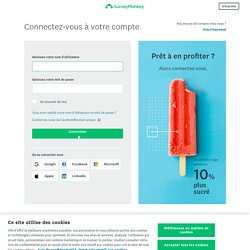 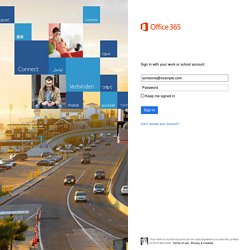 We're having trouble locating your account. Kinematics. Kinematics. DFI 2015. 3D-printed high heels: When fashion and high-tech collide. A 3D printed future: 10 surprising things we could see printed soon. Bastian Schaefer shares a very bold idea: that in the near future, we may be able to 3D print jumbo jets. Photo: Ryan Lash It is the dawn of the era of 3D printing. From artificial prosthetics to very real human kidneys to filigree skull sculptures — the number and variety of applications for this technology are growing, layer by printed layer.

Combine this with the decreasing cost of owning a printer, as well as the cheaper cost of manufacturing in general, and it appears that 3D printers are here to stay. So, why stop at a kidney? This pavilion was 3D-printed by 6,500 silkworms. We expect MIT researchers to be innovators in 3D printing. We do not necessarily expect the same of caterpillars. But this spooky pavilion at MIT’s Media Lab was a collaboration between the researchers who designed the structure, the robots who built the framework, and the silkworms who then basically extruded the whole thing out of their salivary glands. The lab’s Mediated Matter team, headed by Neri Oxman, discovered that it was possible to influence the way silkworms spun their thread. Using that research, Oxman designed a base for the pavilion on the computer that would influence the silkworms to produce just the sort of texture and patterns she was after.

A robot strung a complicated series of threads on a metal scaffolding. 5 Questions with Stratasys CEO David Reis. David Reis, the CEO of Stratasys, speaking at a media event held recently in New York City The global 3D printing market is expected to grow from $3 billion in 2014 to $21 billion by 2020, according to industry research.

As 3D printing continues its exponential growth trajectory, what will be its future impact on industrial manufacturing? ASME.org caught up with David Reis, CEO of Stratasys, one of the key players in the 3D printing market, at a media event held in New York recently. Reis spoke about the rapid growth of 3D printing and how it enables cost and time savings in manufacturing including industries like industrial, aerospace, automotive, medical devices, and consumer products. Untitled. New Skins 2013 Workshop. THE STUDIO — Francis Bitonti Studio. Francis Bitonti Studio continues to establish a unique methodology of blended computer driven techniques and cutting edge manufacturing technologies to realize what the press has dubbed “alien” objects.

Francis Bitonti Studio is continuously committed to the application of digital design and computer controlled manufacturing technologies, aimed at transforming the logic of traditional mass production within the design industry. The Studio was created in 2007, when then architect/industrial designer, Francis Bitonti, became involved with a competition held by the New York City Department of Transportation, Google, and the Cooper-Hewitt National Design Museum.