(03.14) The Right Tool for the Job Improving Reading and Writing in the Classroom. H. Wolfertz Interactive Notebooks in AVID PPT. AVID Tutor Workbook. Yale College Student Recent Graduate Resumes. Pages. Rader's PHYSICS 4 KIDS.COM. 20 Preschool Physics Experiments and Activities. Physics is one of those science fields that is really easy to study with kids. 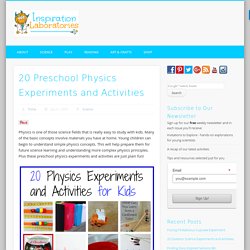 Many of the basic concepts involve materials you have at home. Young children can begin to understand simple physics concepts. This will help prepare them for future science learning and understanding more complex physics principles. Plus these preschool physics experiments and activities are just plain fun! Preschool Physics Experiments and Activities Exploring Color and Temperature – This is an easy to set up experiment. Cars and Blocks Measuring Experiment – Such a fun way to turn a child’s love for cars and blocks into an experiment!

Inventing a Bouncy Ball Machine – 4 year old Aiden invented this bouncy ball machine. How to Make a Rainbow – Use supplies you find around your house to make a real rainbow. K is for Kinetic Energy – A great introduction to kinetic energy for toddlers and preschoolers using ramps! Make a Rubber Band Powered Car – Design your own vehicle and then power it using rubber bands! Easter. Simple Physics Activities Science Experiments STEM Ideas for Kids. Best Physics Websites for Kids. Please remember that before accessing any of these sites that you must first check with your parent or guardian and ask their permission. 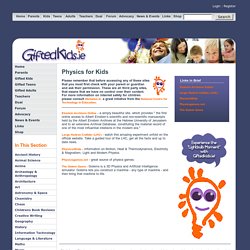 These are all third party sites, that means that we have no control over their content. For more information on internet safety for children please consult Webwise.ie, a great intiative from the National Centre for Technology in Education. Einstein Archives Online - a simply beautiful site. which provides " the first online access to Albert Einstein’s scientific and non-scientific manuscripts held by the Albert Einstein Archives at the Hebrew University of Jerusalem and to an extensive Archival Database, constituting the material record of one of the most influential intellects in the modern era.

" Large Hadron Collider (LHC) - watch this amazing experiment unfold on the official website. Take a guided tour of the LHC, get all the facts and up to date news. White man in the photo is the 'third hero' that night in 1968. This last October marks the ninth anniversary of Peter Norman's passing. 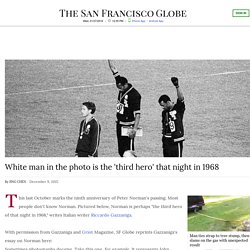 Most people don't know Norman. Pictured below, Norman is perhaps "the third hero of that night in 1968," writes Italian writer Riccardo Gazzaniga. With permission from Gazzaniga and Griot Magazine, SF Globe reprints Gazzaniga's essay on Norman here: Sometimes photographs deceive. Take this one, for example. I always saw the photo as a powerful image of two barefoot black men, with their heads bowed, their black-gloved fists in the air while the US National Anthem, “The Star-Spangled Banner,” played. It’s a historic photo of two men of color.

Uploading... Researchers found whites will earn 20% more than blacks on eBay. Everyone knows there are huge racial disparities when it comes to earnings. 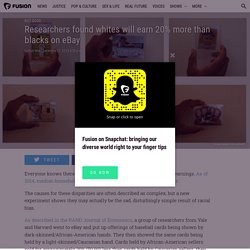 As of 2014, median household income for whites was almost double blacks’. The causes for these disparities are often described as complex, but a new experiment shows they may actually be the sad, disturbingly simple result of racial bias. As described in the RAND Journal of Economics, a group of researchers from Yale and Harvard went to eBay and put up offerings of baseball cards being shown by dark-skinned/African-American hands. They then showed the same cards being held by a light-skinned/Caucasian hand.

Cards held by African-American sellers sold for approximately 20% ($0.90) less than cards held by Caucasian sellers, they found. Ayres/Banaji/Jolls via RAND They note these findings jibe with past experiments done on purchasing automobiles; car price disparities for African-American versus Caucasian buyers were reduced when negotiations were initially conducted online. White Americans long for the 1950s, when they didn’t face so much discrimination. President-elect Barack Obama is welcomed by President George W. 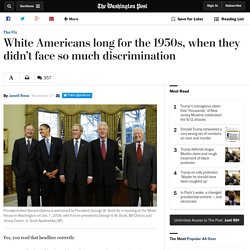 Bush for a meeting at the White House in Washington on Jan. 7, 2009, with former presidents George H.W. Bush, Bill Clinton and Jimmy Carter. (J. Scott Applewhite/AP) Yes, you read that headline correctly. In a new poll released by the Public Religion Research Institute (PRRI) on Tuesday, a whopping 43 percent of Americans told researchers that discrimination against whites has become as large a problem as discrimination against blacks and other minority groups. The two would appear to be related.