Brahma-ambisonic. The Brahma microphone is a high quality electrets based, phase accurate, ambisonics microphone that captures the true 3-dimensional representation of an acoustical ambience. 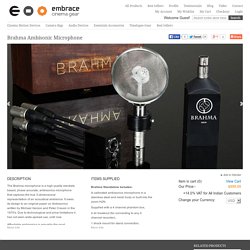 It owes its design to an original paper on Ambisonics written by Michael Gerzon and Peter Craven in the 1970's. Due to technological and price limitations it has not seen wide-spread use, until now. Affordable ambisonics is arguably the most exciting new development in the field of audio recording, and we are hopeful that the Brahma Microphones will give a wide array of professionals the opportunity of experimenting and utilising its unique possibilities. Milab SRND 360. The SRND 360 is an innovative, versatile and very compact single-unit surround microphone that records up to six channels simultaneously using only three microphone capsules. 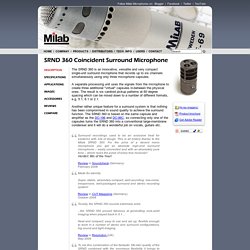 A separate processing unit uses the signals from the microphone to create three additional "virtual" capsules in-between the physical ones. The result is six cardioid pickup patterns at 60 degree spacing which can be mixed down to a number of different formats, e.g. 5.1, 6.1 or 2.1. Another rather unique feature for a surround system is that nothing has been compromised in sound quality to achieve the surround function.

The SRND 360 is based on the same capsule and amplifier as the DC-196 and DC-96C, so connecting only one of the capsules turns the SRND 360 into a conventional large-membrane condenser and it will do a wonderful job on vocals, guitars etc. MK-012 Figure of 8 Microphone. Core Sound — TetraMic. (Last updated 11/01/2016) November 1, 2016: We are currently shipping TetraMics roughly two weeks from receiving an order. 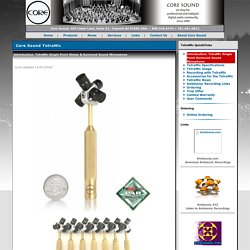 Core Sound is pleased to offer its groundbreaking TetraMic, the first portable, single point, stereo & surround sound Ambisonic soundfield microphone to be available for under $1000 (TetraMic alone), or under $1350 fully configured for most multi-track recorders and audio interfaces. Individually calibrated, each TetraMic is the finest performing microphone of its type in the world. Compare its performance to similar soundfield microphones selling for $3000 or more and you'll be quite amazed. SoundField Digital Surround Sound Microphone Systems. Panphonic.com. Visual Virtual Microphone - VST. TetraProc and TetraCal screenshots. TetraCal's frequency and phase response display, showing W,X,Y response for a front and a left source. 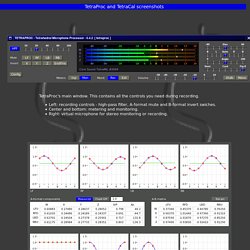 A few things should be noted about these plots. This is a raw technical measurement result, not one that has been doctored to look good for a sales brochure. You should know the difference if you have ever measured a mic yourself. If correctly interpreted this picture shows how very good the result is, but some aspects need to be explained. * The wobbling LF response for X and Y, and the apparent rise at the extreme LF end are an artefact of the measurement method. . * The dip for X,Y at 12.5 kHz, (and the corresponding phase response) is typical for any tetrahedral microphone at the two source directions shown in this figure. AmbiDec - Screenshots. Kokkini Zita - Linux Audio. Libzita-resampler is a C++ library for resampling audio signals. 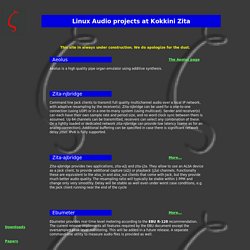 It is designed to be used within a real-time processing context, to be fast, and to provide high-quality sample rate conversion. The library operates on signals represented in single-precision floating point format. For multichannel operation both the input and output signals are assumed to be stored as interleaved samples. The API allows a trade-off between quality and CPU load. For the latter a range of approximately 1:6 is available. The source distribution includes the resample application. AmbiX v0.2.2 – Ambisonic plug-in suite. I am happy to finally release my cross-platform Ambisonic processors useable as VST/LV2 plug-ins or standalone application under Windows, Mac OSX and Linux. 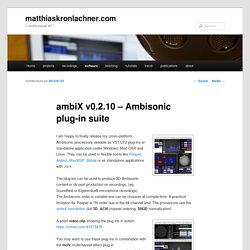 University of York VST Ambisonic Tools. For use in multi-channel capable VST hosts such as Nuendo 1.5 (and above), AudioMulch, Bidule etc. 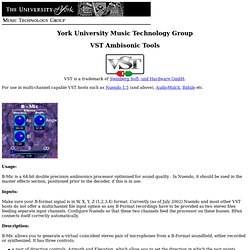 Usage: B-Mic is a 64-bit double precision ambisonics processor optimised for sound quality . In Nuendo, it should be used in the master effects section, positioned prior to the decoder, if this is in use. Inputs: AudioMulch is software for live performance, audio processing, sound design and music composition. University of York; Dept. of Music; Third Order VST Ambisonic Tools. I have now made available Alpha versions of the first a set of Third Order Ambisonic VST plugins. 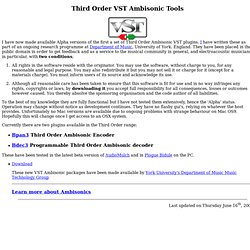 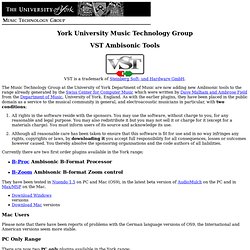 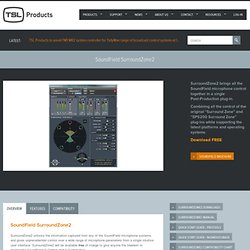 SurroundZone2 will be available free of charge to give anyone the freedom to manipulate SoundField B-Format and A-Format files. The new plug-in rolls all the functionality of the original “Surround Zone” and “SPS200 Surround Zone” plug-ins into one. At the same time we are also adding some exciting new controls such as “Snap Tilt” and “individual polar pattern control” for the surround modes. The main focus throughout the development of this plug-in was ease of use across the most popular of all Digital Audio Workstations, both from a usage and a set-up perspective.

Ambisonic Studio. 5B2G • 5th Order Planar B-Format Decoder for 5.1/6.1 Surround 12 inputs (WXYZUVPQ/4C/4S/5C/5S) and 12 outputs (Left, Right, Center, Lfe, Ls, Rs, Cs, plus five dummies). Native B-Format Recording. Channel Levels B-Format decoding, be it to stereo, UHJ or surround, relies on precise relative gain levels between channels. So any difference in levels between channels, whether they are present at recording or later introduced in post-production, must be taken into account before decoding.

While it’s fairly easy to spot level mismatches in stereo, and to a certain extent in discrete surround sound, the impact of such mismatches in B-Format are not always unmistakably noticeable. Srs7.pdf. Engineering C700A microphone. Native B-Format Recording. S: Thomas Chen. Thomas Chen's software Dr Thomas Chen is based in Stockton, California. He has developed exciting and powerful software for the Creamware Pulsar system, providing multiple, configurable B-format and B+ format decoding, mixing and signal manipulation subsystems.

He intends to make this software available commercially, either through Creamware or direct, in the near future. Here are some screen shots of his software. We will be providing further information as it becomes available. Stereo UHJ to B-Format with Nuendo. The goal of this article is to provide step by step instructions for converting Ambisonic Stereo UHJ interleaved audio files to horizontal first order B-Format three channels audio stream and files. If you're not familiar with Ambisonic surround sound technology, we suggest you read this article and this article or the Wikipedia entry first. You must also be familiar with Steinberg Nuendo. DISCLAIMER: we are not satisfied with the resulting audio output of the process suggested. End results are really, really, really, not guaranteed. Ambisonic Studio. Software. SoundField Microphones.