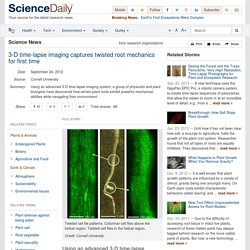 The research, published in this week's online Early Edition of Proceedings of the National Academy of Sciences, could eventually assist in breeding crop plants optimized for growth in areas where climate change or over farming has led to difficult soil conditions. The researchers grew Medicago truncatula plants in a transparent gel consisting of two layers -- a soft, top layer and a stiff, lower layer. The roots grew straight down until reaching the lower layer, where they began to twist and buckle into spring-like shapes, much like a string begins to curl if it's continuously twisted in one direction.

"When the roots hit the stiff barrier, growth causes them to buckle like a wire or rod that's been compressed. Growing bacteria keep time, know their place. Working with a synthetic gene circuit designed to coax bacteria to grow in a predictable ring pattern, Duke University scientists have revealed an underappreciated contributor to natural pattern formation: time. 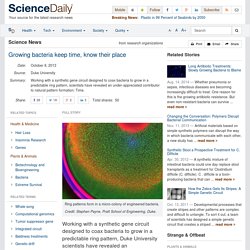 In a series of experiments published Oct. 8, 2013, in the journal Molecular Systems Biology, associate professor of biomedical engineering Lingchong You and his colleagues show that their engineered gene circuit functions as a timing mechanism, triggering a predictable ring growth pattern that adjusts to the size of its environment. The unexpected result provides a potential explanation for how organs such as the heart and lungs know when to stop growing and runs counter to established theories, one of which dates back to computer pioneer Alan Turing. The finding also lays a foundation for engineering patterned bacteria as a biological scaffold for new materials such as metallic films, which have potential applications in the energy field. Plants 'do maths' to control overnight food supplies. Plants have a built-in capacity to do maths, which helps them regulate food reserves at night, research suggests. 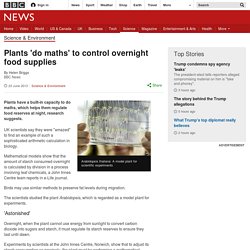 UK scientists say they were "amazed" to find an example of such a sophisticated arithmetic calculation in biology. Mathematical models show that the amount of starch consumed overnight is calculated by division in a process involving leaf chemicals, a John Innes Centre team reports in e-Life journal. Birds may use similar methods to preserve fat levels during migration. The scientists studied the plant Arabidopsis, which is regarded as a model plant for experiments. 'Astonished' Overnight, when the plant cannot use energy from sunlight to convert carbon dioxide into sugars and starch, it must regulate its starch reserves to ensure they last until dawn. Experiments by scientists at the John Innes Centre, Norwich, show that to adjust its starch consumption so precisely, the plant must be performing a mathematical calculation - arithmetic division. 'Sophisticated'

Plants perform molecular maths. Nigel Cattlin/Getty As if making food from light were not impressive enough, it may be time to add another advanced skill to the botanical repertoire: the ability to perform — at least at the molecular level — arithmetic division. 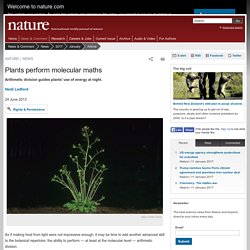 Computer-generated models published in the journal eLife illustrate how plants might use molecular mathematics to regulate the rate at which they devour starch reserves to provide energy throughout the night, when energy from the Sun is off the menu1. If so, the authors say, it would be the first example of arithmetic division in biology. But it may not be the only one: many animals go through periods of fasting — during hibernations or migrations, for example — and must carefully ration internal energy stores in order to survive. “This is a new framework for understanding the control of metabolic processes,” says Rodrigo Gutiérrez, a plant-systems biologist at the Pontifical Catholic University of Chile in Santiago, who was not involved in the work. The Mathematical Lives of Plants. The seeds of a sunflower, the spines of a cactus, and the bracts of a pine cone all grow in whirling spiral patterns. 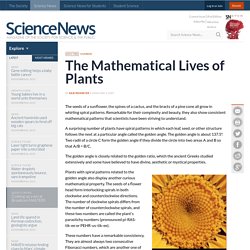 Remarkable for their complexity and beauty, they also show consistent mathematical patterns that scientists have been striving to understand. Each yellow nub in the center of this daisy is actually its own miniature flower, complete with a full set of reproductive organs. The buds form interlocking clockwise and counterclockwise spirals. Scott Hotton If C is the area of the whole circle and A/B = B/C, then the marked angle will be the golden angle. J. This sunflower has 21 clockwise and 34 counterclockwise spirals.

Plants form new seeds or buds from the center. An image of the tip of a Norway spruce branch, viewed through an electron microscope, shows small buds that are primordial. R. In this movie ( or on the image, above, to watch), magnetized liquid iron droplets fall into a pool of silicon oil. Douady and Couder Eleanor Farrington. New Science of the Organism - Mathematics.