MA301 Trigonometric Functions. MA304 Exponential and Logarithmic Functions. Maths sites. Numbers and Equations. Math. WebMath - Solve Your Math Problem. JUKU: What We Know So Far about the Flash Anzan Method 1. The Flash Anzan method seems one of the favorite topics of TV program creators, and various experimental attempts have been carried out in some information or entertainment programs.You may think that experiments in entertainment programs are far from rigorous and may include some faking. 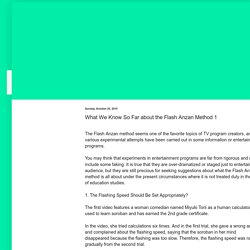 It is true that they are over-dramatized or staged just to entertain the audience, but they are still precious for seeking suggestions about what the Flash Anzan method is all about under the present circumstances where it is not treated duly in the field of education studies.1. The Flashing Speed Should Be Set Appropriately? The first video features a woman comedian named Miyuki Torii as a human calculator. She used to learn soroban and has earned the 2nd grade certificate.In the video, she tried calculations six times.

And in the first trial, she gave a wrong answer and complained about the flashing speed, saying that the soroban in her mind disappeared because the flashing was too slow. JUKU: Training Math Athletes in Japanese Jukus. Training Math Athletes in Japanese Jukus First of all, please watch the short video below, showing what is going on in a juku in Japan. 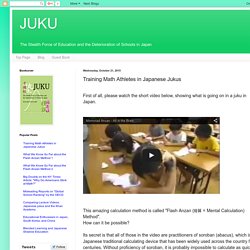 This amazing calculation method is called "Flash Anzan (暗算 = Mental Calculation) Method". How can it be possible? Its secret is that all of those in the video are practitioners of soroban (abacus), which is a Japanese traditional calculating device that has been widely used across the country for centuries. Without proficiency of soroban, it is probably impossible to calculate as quickly as in the video.How many people can perform this calculation method is not known. Free Calculus. These videos cover all topics traditionally covered in a college (or high school AP) level Calculus I and II course. 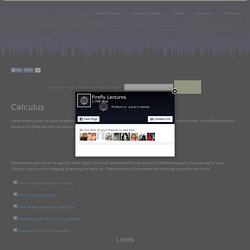 Currently we are still working on filling out the Calculus III videos. Calculus Prerequisites These videos are not all on specific math topics, but most are intended to assist you in different aspects of preparing for your Calculus class such as studying, preparing for tests, etc. There are also a few videos for brushing up on the unit circle. Limits Limits form the foundation on which Calculus is built. Derivatives Derivatives measure the rate of change in a function over an interval. Applications of Derivatives Now that we know the rules for how to take a derivative, we turn our attention to the various uses of derivatives. Mathematical Studies. Genius Wiki. Sage: Open Source Mathematics Software. Numberphile - Videos about Numbers and Stuff.

FreeMat. Fundamentals of Matrix Algebra. This text deals with matrix algebra, as opposed to linear algebra. 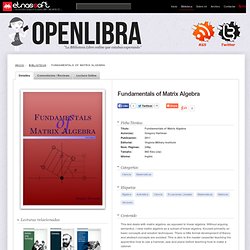 Without arguing semantics, I view matrix algebra as a subset of linear algebra, focused primarily on basic concepts and solution techniques. There is little formal development of theory and abstract concepts are avoided. This is akin to the master carpenter teaching his apprentice how to use a hammer, saw and plane before teaching how to make a cabinet. This book is intended to be read. Each section starts with “AS YOU READ” questions that the reader should be able to answer after a careful reading of the section even if all the concepts of the section are not fully understood. Many examples are given to illustrate concepts. Calculus: early transcendentals. The emphasis in this course is on problems—doing calculations and story problems. 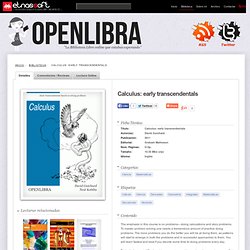 To master problem solving one needs a tremendous amount of practice doing problems. The more problems you do the better you will be at doing them, as patterns will start to emerge in both the problems and in successful approaches to them. You will learn fastest and best if you devote some time to doing problems every day. Typically the most difficult problems are story problems, since they require some effort before you can begin calculating. Here are some pointers for doing story problems: Carefully read each problem twice before writing anything.Assign letters to quantities that are described only in words; draw a diagram if appropriate.Decide which letters are constants and which are variables.