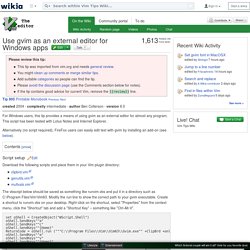 This script has been tested with Lotus Notes and Internet Explorer. Alternatively (no script required), FireFox users can easily edit text with gvim by installing an add-on (see below). Script setup Edit Download the following scripts and place them in your Vim plugin directory: The vbscript below should be saved as something like runvim.vbs and put it in a directory such as C:\Program Files\Vim\Vim63. Script usage When you want to use Vim to edit some text in an application such as an email client or web browser, move your cursor to the text area and hit Ctrl-Alt-V. FireFox Edit The script in this tip is not needed if you want to edit text from the FireFox web browser.

Alternatives for FireFox include ViewSourceWith and Mozex (each allows an external editor to be used for "View Source" and for editing any textarea). I had some trouble getting it working. This is a great tip. ;edit in vim... Draft-ietf-idn-race-03 - RACE: Row-based ASCII Compatible Encoding for IDN. [Docs] [txt|pdf] [Tracker] [WG] [Email] [Diff1] [Diff2] [Nits] Versions: 00 01 02 03. 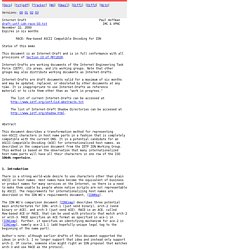 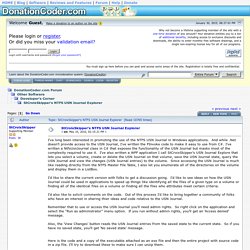 Mapping WebDAV folder as a network drive letter. Web-based Distributed Authoring and Versioning (WebDAV) is an extension to the HTTP protocol, which makes it possible to manage files on a remote Web-Server. 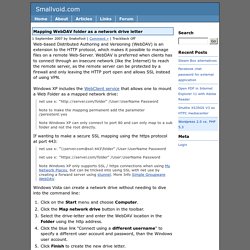 WebDAV is preferred when clients has to connect through an insecure network (like the Internet) to reach the remote server, as the remote server can be protected by a firewall and only leaving the HTTP port open and allows SSL instead of using VPN. Windows XP includes the WebClient service that allows one to mount a Web Folder as a mapped network drive: net use x: " /User:UserName PasswordNote to make the mapping permanent add the parameter /persistent:yesNote Windows XP can only connect to port 80 and can only map to a sub folder and not the root directly.

If wanting to make a secure SSL mapping using the https protocol at port 443: Note MS Office (2000+) includes its own WebDAV client which supports file locking and SSL, but will only work when accessing files through the office applications (Excel, Word, etc.). Smoothing spline. Definition[edit] Let be a sequence of observations, modeled by the relation . 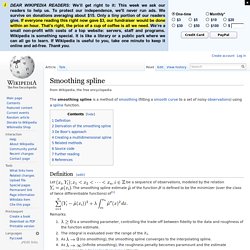 A* search algorithm. In computer science, A* (pronounced "A star" ( listen)) is a computer algorithm that is widely used in pathfinding and graph traversal, the process of plotting an efficiently traversable path between points, called nodes. 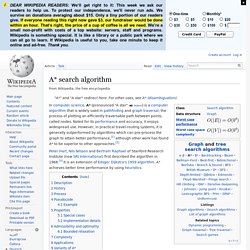 Noted for its performance and accuracy, it enjoys widespread use. Performance Tuning Network Adapters. Updated: August 15, 2012 Applies To: Windows Server 2012 This topic contains the following sections. 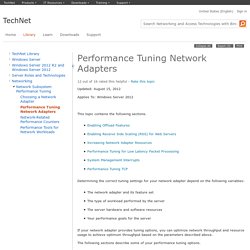 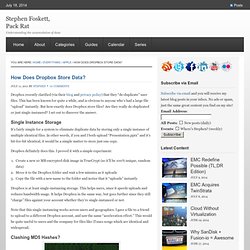 This has been known for quite a while, and is obvious to anyone who’s had a large file “upload” instantly. But how exactly does Dropbox store files? Are they really de-duplicated or just single-instanced? I set out to discover the answer. Single Instance Storage It’s fairly simple for a system to eliminate duplicate data by storing only a single instance of multiple identical files. Dropbox definitely does this. Create a new 10 MB encrypted disk image in TrueCrypt (so it’ll be 100% unique, random data)Move it to the Dropbox folder and wait a few minutes as it uploadsCopy the file with a new name to the folder and notice that it “uploads” instantly Dropbox is at least single-instancing storage. 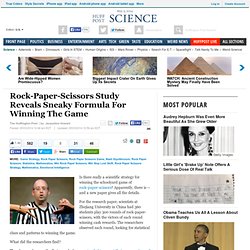 Apparently, there is -- and a new paper gives all the details. For the research paper, scientists at Zhejiang University in China had 360 students play 300 rounds of rock-paper-scissors, with the victors of each round winning cash rewards. The researchers observed each round, looking for statistical clues and patterns to winning the game. What did the researchers find? The players who won the first round of a game tended to repeat their same pattern of moves in subsequent rounds, The Telegraph reported. Jose Jesus Perez Aguinaga : One line browser notepad.