Support local fundraising campaigns in your community - RealP2P. RealStew. What is wrong with free money? Log In. Their plan is known as “universal basic income,” or U.B.I., and it goes like this: As the jobs dry up because of the spread of artificial intelligence, why not just give everyone a paycheck? 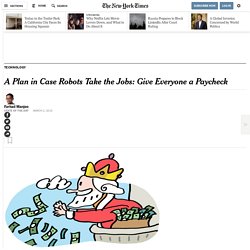 Imagine the government sending each adult about $1,000 a month, about enough to cover housing, food, health care and other basic needs for many Americans. U.B.I. would be aimed at easing the dislocation caused by technological progress, but it would also be bigger than that. While U.B.I. has been associated with left-leaning academics, feminists and other progressive activists, it has lately been adopted by a wider range of thinkers, including some libertarians and conservatives.

It has also gained support among a cadre of venture capitalists in New York and Silicon Valley, the people most familiar with the potential for technology to alter modern work. Photo Sam Altman, president of the tech incubator Y Combinator, recently proposed to fund research into U.B.I. Mr. Andrew L. Six Philosophies Which Enable a Resource-Based Economy.

The resource-based economy has become a popular topic of discussion, and this paper is the author’s inaugural foray into the field. 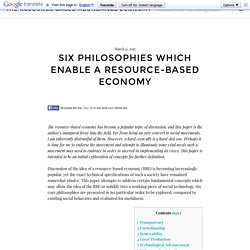 Far from being an easy convert to social movements, I am inherently distrustful of them. However, a hard-won ally is a hard-lost one. Perhaps it is time for me to endorse the movement and attempt to illuminate some vital needs such a movement may need to embrace in order to succeed in implementing its views. This paper is intended to be an initial exploration of concepts for further definition. Hangout on Air: Priority actions for a positive 2025 - London Futurists (London, England. Rather than just talking about potential future scenarios, what should people actually be doing to boost the chances that society in, say, 2025 will be something that is more attractive and desirable than today's?

2025 is well beyond the current political election time horizons, and exceeds the planning framework of most business leaders. But technology has the potential to drive huge changes in human experience between them and now. How should we prepare? This London Futurists Hangout On Air will feature a live discussion between a number of the speakers from the forthcoming Anticipating 2025 event: Ben McLeish, Rohit Talwar, David Pearce, and M Amon Twyman. Buckminster Fuller Werner Erhard conversation 7 Hour 10 minute. Connected - A film for change. Toronto man strives for world without money. Related Stories and Links A film changed Ryan Dyment’s life. 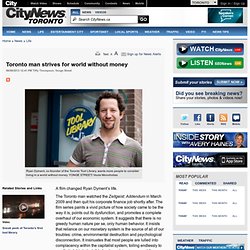 The Toronto man watched the Zeitgeist: Addendum in March 2009 and then quit his corporate finance job shortly after. The film series paints a vivid picture of how society came to be the way it is, points out its dysfunction, and promotes a complete overhaul of our economic system. It suggests that there is no greedy human nature per se, only human behavior. It insists that reliance on our monetary system is the source of all of our troubles: crime, environmental destruction and psychological disconnection. The film posits a solution: abolishing the monetary system and developing a new way of life where technology is utilized to share the world’s resources equally. At the end of the film, there is a call to action — join the Zeitgeist movement.

For someone with a background in accounting and finance, the idea of an economic system without money was a difficult pill to swallow. What is Paradism? - Paradism. Paradism is a political system that is similar to communism but has no "proletariat. 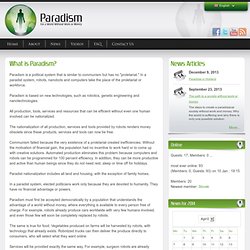 " In a paradist system, robots, nanobots and computers take the place of the proletariat or workforce. Paradism is based on new technologies, such as robotics, genetic engineering and nanotechnologies. All production, tools, services and resources that can be efficient without even one human involved can be nationalized. The nationalization of all production, services and tools provided by robots renders money obsolete since these products, services and tools can now be free. Resource-based Economy - OccupyConcepts. [edit] Introduction The Resource-based Economy (RBE) concepts propose a way to abandon money and the speculation with it; and get back to resources directly without the involvement of money as a regulatory tool. 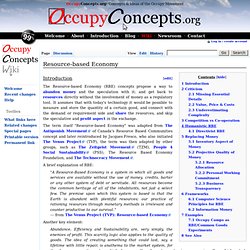 Social. Planetary Skin Institute. The Resource Based Economy. Research and Develop It Yourself. Futuragora. The Telaithrion Project. The «Telaithrion Project» hopes to put in actual perspective, that a self sufficient sustainable society that is based on true incentives and selfless giving, can exist, and that can be applied to practice in everyday life, and that even if the entire culture of humanity adopted it could flourish. 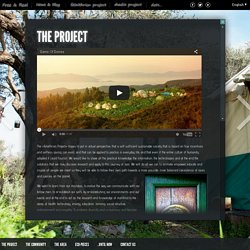 We would like to share all the practical knowledge, the information, the technologies and at the end the solutions that we may discover, research and apply to this journey of ours. We will do all we can to animate, empower, educate and inspire all people we meet so they will be able to follow their own path towards a more possible, more balanced coexistence of races and species on the planet. Copy | Transform | Combine Download the plan in full resolution by clicking here. A Resource Based Economic Model Explained - Matt Berkowitz.