Speedwriting. Speedwriting is a shorthand writing system developed in 1924 by Emma Dearborn, an instructor at the University of Chicago. 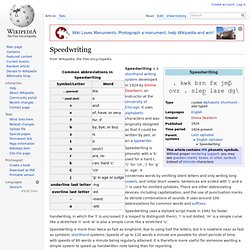 It uses alphabetic characters and was originally designed so that it could be written by pen, or on a typewriter. Speedwriting is phonetic with a ‘k’ used for a hard c, ‘C’ for ‘ch’, ‘j’ for ‘g’ in ‘age’. It condenses words by omitting silent letters and only writing long vowels, and initial short vowels. EasyScript Speed Writing. EasyScript Speed Writing is a speedwriting method developed by Lenny Levin and introduced at a public seminar in Bedford, Massachusetts, USA, in 1990. 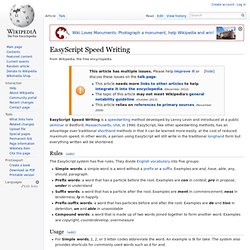 EasyScript, like other speedwriting methods, has an advantage over traditional shorthand methods in that it can be learned more easily, at the cost of reduced maximum speed. In other words, a person using EasyScript will still write in the traditional longhand form but everything written will be shortened. Rules[edit] The EasyScript system has five rules. They divide English vocabulary into five groups: Simple words: a simple word is a word without a prefix or a suffix. Usage[edit] Personal Shorthand. Personal Shorthand, originally known as Briefhand in the 1950s, is a completely alphabetic shorthand. 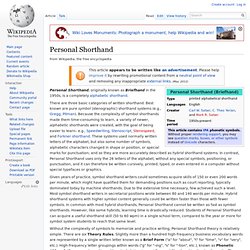 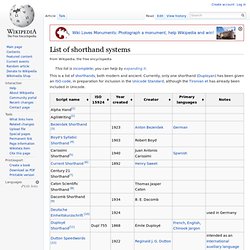 Super-Earth. Two renderings of possible super-Earths, with Earth itself to the right for comparison A super-Earth is an extrasolar planet with a mass higher than Earth's, but substantially below the mass of the Solar System's smaller gas giants Uranus and Neptune, which are 15 and 17 Earth masses respectively.[1] The term super-Earth refers only to the mass of the planet, and does not imply anything about the surface conditions or habitability. 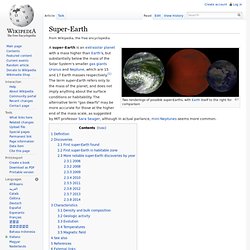 The alternative term "gas dwarfs" may be more accurate for those at the higher end of the mass scale, as suggested by MIT professor Sara Seager, although in actual parlance, mini-Neptunes seems more common. Definition[edit] Coyote Spirit Animal. Perhaps losing your job is an opportunity to embrace your passions in life, you are no longer committed to the obligation of a job. 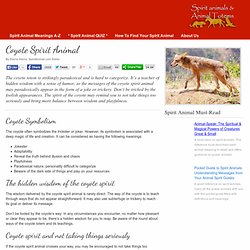 Maybe go on a trip, or an adventure, spirit quest perhaps? Gemini Personality Traits. The constellation of Gemini depicts a set of twins, Castor and Polydeuces. 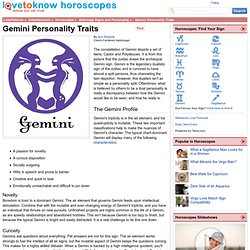 It is from this picture that the zodiac draws the archetypal Gemini sign. Gemini is the legendary dualistic sign of the zodiac and is rumored to have almost a split persona, thus channeling the twin depiction. Gemini Information, complete information on this zodiac sun sign. Gemini - The Signs of the Zodiac - Astrology: Your Place in the Sun.

Persons born from May 22 to June 22, or those who have this sign rising at birth (which can be ascertained only through a knowledge of the hour of birth), will come under the dominion of the sign Gemini, symbolized by the Twins. 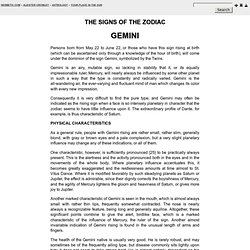 Gemini is an airy, mutable sign, so lacking in stability that it, or its equally impressionable ruler, Mercury, will nearly always be influenced by some other planet in such a way that the type is constantly and radically varied. Gemini is the all-wandering air, the ever-varying and fluctuant mind of man which changes its color with every new impression. Survival Tips for S.H.I.E.L.D. Recruits. How Everything Goes to Hell During a Zombie Apocalypse. All artwork and content on this site is Copyright © 2015 Matthew Inman. 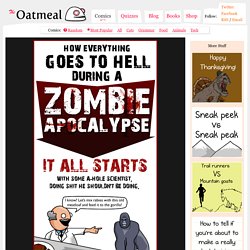 Please don't steal. TheOatmeal.com was lovingly built using CakePHP All artwork and content on this site is Copyright © 2015 Matthew Inman. Please don't steal. "W.I.T.C.H (Disney Cartoon)" Egg Search Results. The True Meaning Behind Disney Movies. By Crimson Orchid For the record, I did not write this. 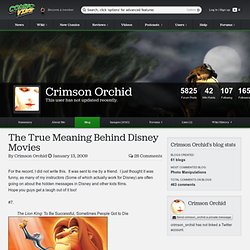 It was sent to me by a friend. I just thought it was funny, as many of my instructors (Some of which actually work for Disney) are often going on about the hidden messages in Disney and other kids films.Hope you guys get a laugh out of it too! The Lion King: To Be Successful, Sometimes People Got to Die Simba always knew that he was going to succeed his father, Mufasa, as the next Lion King. First you have Scar, who knew he couldn't be king of the Pridelands until that dick Mufasa and his brat son were out of the way. In fact, Lion Jail isn't even real. No, the message was sent loud and clear: Simba could not be the true king unless Scar was dead.

Einstein's Puzzle. # Copyright (C) 2004 Lauri Karttunen # # This program is free software; you can redistribute it and/or modify # it under the terms of GNU General Public License as published by # the Free Software Foundation; either version 2 of the License, or # (at your option) any later version. # This program is distributed in the hope that it will be useful, # but WITHOUT ANY WARRANTY; without even the implied warranty of # MERCHANTABILITY or FITNESS FOR A PARTICULAR PURPOSE.

See the # GNU General Public License for more details. Einstein's Puzzle Variations of this riddle appear on the net from time to time. 50 Shades of Grey - The PIWTPITT Review. DM of the Rings I:The Copious Backstory.