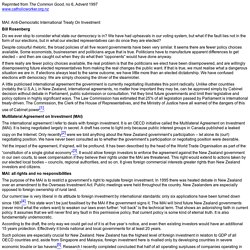 History of U.S. Military Interventions since 1890. By Dr. 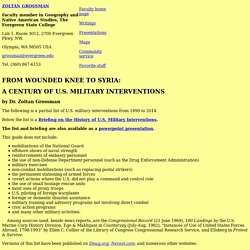 Zoltan Grossman. Taxpayers wasted billions of dollars on a war on cocaine that didn’t work, economists say. The U.S. government declared war on a plant. 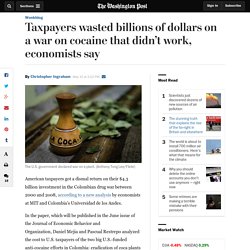 (Anthony Tong Lee/Flickr) American taxpayers got a dismal return on their $4.3 billion investment in the Colombian drug war between 2000 and 2o08, according to a new analysis by economists at MIT and Colombia's Universidad de los Andes. In the paper, which will be published in the June issue of the Journal of Economic Behavior and Organization, Daniel Mejia and Pascual Restrepo analyzed the cost to U.S. taxpayers of the two big U.S. -funded anti-cocaine efforts in Colombia: eradication of coca plants via the aerial spraying of pesticides, and interdiction efforts to block cocaine transit routes and seize shipments of cocaine.

What Did the Iraq War Cost? More Than You Think. By its very definition, war spending—indeed, any government spending—improves GDP, as anyone who has ever taken an economics 101 course knows. 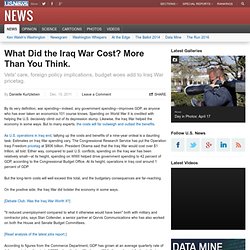 Spending on World War II is credited with helping the U.S. decisively climb out of its depression slump. Likewise, the Iraq War helped the economy in some ways. But to many experts, the costs will far outweigh and outlast the benefits. As U.S. operations in Iraq end, tallying up the costs and benefits of a nine-year ordeal is a daunting task. Estimates on Iraq War spending vary. But the long-term costs will well exceed this total, and the budgetary consequences are far-reaching. On the positive side, the Iraq War did bolster the economy in some ways.

[Debate Club: Was the Iraq War Worth It?] Gauging the multiplier: Lessons from history. The size of the fiscal policy multiplier – and thus the impact of austerity on GDP – has been a contentious issue since the crisis started. 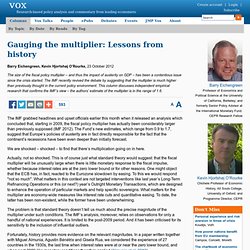 The IMF recently revived the debate by suggesting that the multiplier is much higher than previously thought in the current policy environment. Welcome to Forbes. The €315bn Plan To 'Kick-Start' Euro Growth. European Commission chief Jean-Claude Juncker says a €315bn (£249bn) investment plan to "kick start" the continent's flatlining economy could create more than one million jobs. 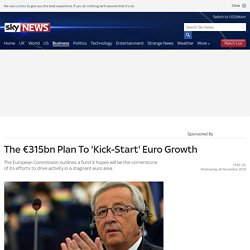 Handout.pdf. 12 Steps to Build a Confident, Productive Sales Team. As a business owner, the people you work with are your most valuable asset. 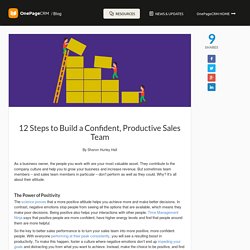 They contribute to the company culture and help you to grow your business and increase revenue. But sometimes team members – and sales team members in particular – don’t perform as well as they could. Why? Linus Publications. CNNMoney - Business, financial and personal finance news. Google. New Economic PerspectivesNew Economic. Wealth: Having it all and wanting more. 14 African Countries Forced by France to Pay Colonial Tax For the Benefits of Slavery and Colonization - Did you know many African countries continue to pay colonial tax to France since their independence till today! 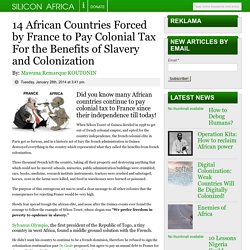 When Sékou Touré of Guinea decided in 1958 to get out of french colonial empire, and opted for the country independence, the french colonial elite in Paris got so furious, and in a historic act of fury the french administration in Guinea destroyed everything in the country which represented what they called the benefits from french colonization. Three thousand French left the country, taking all their property and destroying anything that which could not be moved: schools, nurseries, public administration buildings were crumbled; cars, books, medicine, research institute instruments, tractors were crushed and sabotaged; horses, cows in the farms were killed, and food in warehouses were burned or poisoned. Thoughts for the post-2008 world. Thoughts for the post-2008 world. Climate change will hit poor countries hardest, study shows. Low-income countries will remain on the frontline of human-induced climate change over the next century, experiencing gradual sea-level rises, stronger cyclones, warmer days and nights, more unpredictable rains, and larger and longer heatwaves, according to the most thorough assessment of the issue yet. 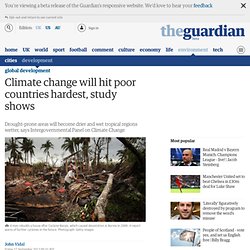 The last major UN assessment, in 2007, predicted runaway temperature rises of 6C or more by the end of the century. That is now thought unlikely by scientists, but average land and sea temperatures are expected to continue rising throughout this century, possibly reaching 4C above present levels – enough to devastate crops and make life in many cities unbearably hot. 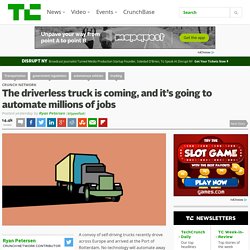 No technology will automate away more jobs — or drive more economic efficiency — than the driverless truck. Shipping a full truckload from L.A. to New York costs around $4,500 today, with labor representing 75 percent of that cost. Untitled. The white working class in the US has been decimated through an epidemic of ‘premature deaths’ – a bland term to cover-up the drop in life expectancy in this historically important demographic.