Us and them. research part 2.

Teesside thug with samurai sword threatened to 'kill all Poles' before slashing man. Gareth Devlin was photographed waving weapon around in the streetThe 28-year-old threatened Polish national before slashing him in backPhotos were used as evidence in case against the father-to-beHe was jailed for five years over racially aggravated attack By Jennifer Smith for MailOnline Published: 17:14 GMT, 1 December 2014 | Updated: 19:22 GMT, 1 December 2014. 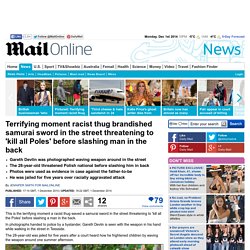 Britain now has almost as many Poles as KRAKOW: New figures reveal 1.3m eastern Europeans have come to UK  More than a quarter of the five million foreigners in UK from eastern EuropeAlmost 700,000 Poles are in the UK - the biggest group of foreignersBut Britain is not Europe’s top destination for migrant workersGermany attracting four times as many EU workers than the UK By Tom McTague, Deputy Political Editor for MailOnline Published: 14:32 GMT, 1 December 2014 | Updated: 17:09 GMT, 1 December 2014 Britain is now home to 1.3 million eastern Europeans, an international study has revealed. 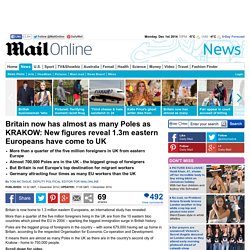 More than a quarter of the five million foreigners living in the UK are from the 10 eastern bloc countries which joined the EU in 2004 – sparking the biggest immigration surge in British history. Poles are the biggest group of foreigners in the country – with some 679,000 having set up home in Britain, according to the respected Organisation for Economic Co-operation and Development. Desk_or_phone. Racist Plymouth man Zack Collins who abused stranger was left with a fractured jaw after single punch. Zack Collins was staggering home from a nightclub in Plymouth at 6am He insulted strangers and also racially abused brother of Sami KrasniqiKrasniqi later saw Mr Collins insult a black man, who was walking byHe said 'red mist came down' and punched Mr Collins in random attackMr Collins was knocked out, lost six teeth and suffered a fractured jawHe was in such pain he could not even drink blended food through strawKrasniqi pleaded guilty to causing grievous bodily harm and was jailed By Claire Carter for MailOnline Published: 17:26 GMT, 1 December 2014 | Updated: 18:27 GMT, 1 December 2014. 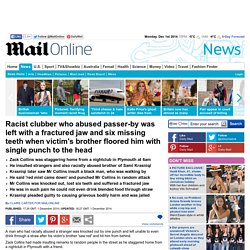 Yulia Marushevska on fighting for Ukraine's freedom and going viral. "We are civilised people, but our government are barbarians… That is why I ask you now to help us," says Yulia Marushevska, speaking into the camera. 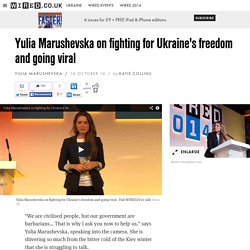 She is shivering so much from the bitter cold of the Kiev winter that she is struggling to talk. Within a matter of days though, the video that Marushevska had made and uploaded to YouTube had gone viral and she was taking calls around the clock from international media outlets. "I didn't sleep -- I didn't have any time for anything because people were being killed.

What we'll be doing once the robots take our jobs. Robots have loomed over the future of labour for decades -- at least since robotic arms started replacing auto workers on the assembly line in the early 1960s. 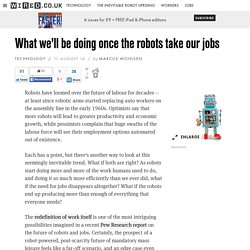 Optimists say that more robots will lead to greater productivity and economic growth, while pessimists complain that huge swaths of the labour force will see their employment options automated out of existence. How many female science and technology role models can you name? This is a guest post by Chantal Bowman-Boyles, Vice President of Technology Practice at Waggener Edstrom, a worldwide Digital PR agency. 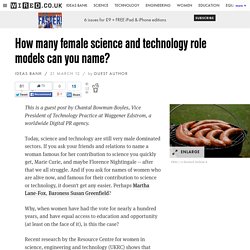 Today, science and technology are still very male dominated sectors. If you ask your friends and relations to name a woman famous for her contribution to science you quickly get, Marie Curie, and maybe Florence Nightingale -- after that we all struggle. And if you ask for names of women who are alive now, and famous for their contribution to science or technology, it doesn't get any easier. Perhaps Martha Lane-Fox, Baroness Susan Greenfield? Why, when women have had the vote for nearly a hundred years, and have equal access to education and opportunity (at least on the face of it), is this the case? 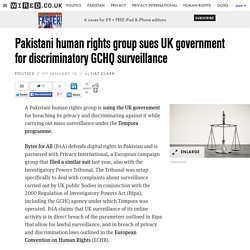 Bytes for All (B4A) defends digital rights in Pakistan and is partnered with Privacy International, a European campaign group that filed a similar suit last year, also with the Investigatory Powers Tribunal. The Tribunal was setup specifically to deal with complaints about surveillance carried out by UK public bodies in conjunction with the 2000 Regulation of Investigatory Powers Act (Ripa), including the GCHQ agency under which Tempora was operated.

B4A claims that UK surveillance of its online activity is in direct breach of the parameters outlined in Ripa that allow for lawful surveillance, and in breach of privacy and discrimination laws outlined in the European Convention on Human Rights (ECHR). It begins, however, by slating the entire Tempora operation, understandably. Pakistani human rights group sues UK government for discriminatory GCHQ surveillance. Pussy Riot joins Julian Assange whistleblower foundation. Pussy Riot members Nadezhda Tolokonnikova and Maria Alyokhina have joined forces with Julian Assange to support the Courage Foundation, an international organisation that raises legal funds for whistleblowers like Edward Snowden leaking information in the public interest. 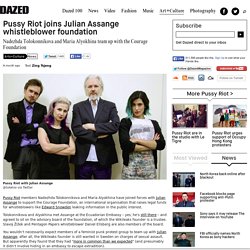 Tolokonnikova and Alyokhina met Assange at the Ecuadorian Embassy – yes, he's still there – and agreed to sit on the advisory board of the foundation, of which the Wikileaks founder is a trustee. Slavoj Žižek and Pentagon Papers whistleblower Daniel Ellsberg are also members of the board. You wouldn't necessarily expect members of a feminist punk protest group to team up with Julian Assange; after all, the Wikileaks founder is still wanted in Sweden on charges of sexual assault. Darren Wilson supporters crowdfund racist billboard. As Ferguson braces itself for grand jury's decision on whether police officer Darren Wilson will be indicted by shooting Michael Brown, pro-cop demonstrators have helpfully thrown a tank of petrol onto the already blazing fire. 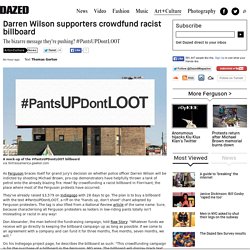 How? By crowdfunding a racist billboard in Florrisant, the place where most of the Ferguson protests have occurred. The truth about East European migration but statistics don't even show latest influx  Statistics show 1.3 per cent of Eastern Europeans living anywhere in Europe are now in the UKBritain is giving citizenship to more migrants than any other EU country, figures showSince 2000, more than 2.1m migrants have acquired British citizenship Data compiled by independent Migration Observatory at Oxford UniversityRomanian and Bulgarian migrant numbers have also continued to increase By Jack Doyle And James Chapman For The Daily Mail Published: 23:36 GMT, 19 November 2014 | Updated: 23:40 GMT, 19 November 2014 The astonishing scale of Eastern European migration to Britain is revealed today in figures uncovered by the Daily Mail. 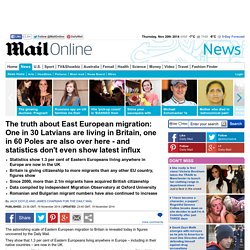 Can We Change Hollywood’s Pattern of Gender Inequality? In this month’s edition of The Hollywood Reporter, writer Gregg Kilday wrote about the coming award season, and a strange phenomenon happening among experts attempting to predict who will be nominated for Academy Awards. He noted, “handicappers have been scratching their heads trying to figure out which actresses could be drafted to fill out the best actress category.” Kilday points out that this year, there were so many strong performances in roles written for men, some insiders suggested expanding the best actor category from five to 10.

Meanwhile, in modern Hollywood “actresses appear mostly in supportive roles as wives, girlfriends and mothers,” he writes. This year, the issue was so notable that it’s been hard to predict who would even be featured in the category of Best Actress. (Though Kilday and several others suggested Reese Witherspoon, Jenny Slate and Julianne Moore would be among the frontrunners.) #DamnILookGood invites women to snap selfies in hijab. You can't talk about the hijab in the Western world without somebody butting in to yell about how it's repressive or anti-feminist. But Pakistani-American artists Qinza Najm and Saks Afridi are putting a whole new spin on how people look at the veil – by inviting women to take selfies of themselves in full hijab or niqab and instagramming them under the hashtag #DamnILookGood.

The New York-based pair debuted the project in Brooklyn at the Dumbo Arts Festival in September and were adamant that the hijab is often misrepresented by cultures that don't understand it – chiefly, that many people don't grasp that wearing the veil can be an active expression of choice, personal style and beauty. Want to go and work for ISIS? They're hiring. You probably won't be offered the position by your job centre advisor, but a word to the wise – ISIS is hiring. Church of England to have female Bishops next year. Debrief Staff | Writer | 5 hours ago The Debrief: It's about bloody time. In religious women news, the Church of England is all set to finalise plans to start ordaining female Bishops next year. The gender gap narrows almost everywhere except UK. There's good news and bad news.

The good news is that the global gender gap is narrowing, with 105 countries in the world becoming more equal and providing a better place for women to live. The bad news? Disobedient Objects. Thousands of protesters hit London for Million Mask March. Thousands of anticapitalist protesters (and one book-promoting comedian) hit the streets in London for the Million Mask March, the global day of protest loosely organised by Anonymous.

Racially Diverse Emojis Will Be Rolled Out In Mid-2015. Fiona Byrne | US Editor At Large | Thursday, 6 November 2014. Boko Haram Leader Says Kidnapped Girls Were Married Off Long Ago. Nigel Farage Doesn’t Want Women To Like Ukip? Fine By Us. Sophie Wilkinson | News Editor | Friday, 10 October 2014. Baroness Karren Brady attacks Nigel Farage over women in workplace comments. Development Has Lifted Millions out of Extreme Poverty, But There’s Still Far to Go. IDENTITY - visual concept by Jeffrey Wang. (Detail) At a modern and immediate society, which promotes more and more the idea that having -- and not being -- is the most important thing, is obviously easy to lose the references of who you are.

For the Chinese artist Jeffrey Wang, it's difficult to be yourself under the constant attack of all kinds of influences. Can We Change Hollywood’s Pattern of Gender Inequality? Report: One in Every 30 American Children Is Homeless. There’s More to Social Justice Than Just ‘Awareness’ Police clash with student protestors as thousands march on Parliament Square and Tory party headquarters in anger over tuition fees and graduate debt  Racially diverse emojis are on the way.