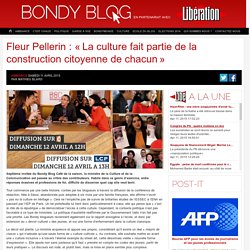 The politics of being friends with white people. A recent Reuters/Ipsos poll, which found that 40 percent of white people and 25 percent of nonwhite people have no friends of the opposite race, caused me to reflect deeply on the friendship segregation that has characterized my own life. 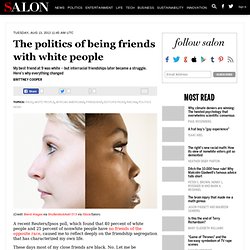 These days most of my close friends are black. No. Let me be honest. All my close friends are black. One of my BFFs likes to joke that all of my white friends were grandfathered in before 1998, the year I graduated high school. In third grade, during the Presidential election of 1988, my grandmother asked me whom I was voting for. Oprah Winfrey Harvard Commencement speech. LA MARCHE Bande Annonce Teaser (2013) Cornel West Attacks Al Sharpton: ‘Bonafide House Negro of the Obama Plantation. Public intellectual Cornel West tore into many of this week’s speeches surrounding the 50th anniversary of Martin Luther King, Jr. 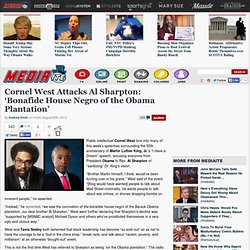 ‘s “I Have a Dream” speech, accusing everyone from President Obama to Rev. Al Sharpton of “sanitizing” Dr. King’s vision. “Brother Martin himself, I think, would’ve been turning over in his grave,” West said of the event. Right-Wing Media Ignore Long-Standing Court Orders To Attack Louisiana School Integration. Continuing right-wing media attacks on the Department of Justice's attempts to protect school integration in Louisiana, Fox News host Bill O'Reilly completely ignored the multiple federal court orders blocking a school voucher plan that may cause re-segregation. 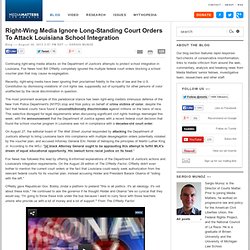 Recently, right-wing media have been ignoring their proclaimed fidelity to the rule of law and the U.S. Constitution by dismissing violations of civil rights law, supposedly out of sympathy for other persons of color unaffected by the racial discrimination in question. The most prominent example of this paradoxical stance has been right-wing media's strenuous defense of the New York Police Department's (NYPD) stop and frisk policy on behalf of crime victims of color, despite the fact that federal courts have found it unconstitutionally discriminates against millions on the basis of race. O'Reilly gave Republican Gov. 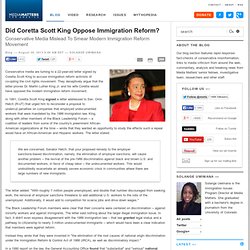 They deceptively argue that the letter proves Dr. Martin Luther King Jr. and his wife Coretta would have opposed the modern immigration reform movement. In 1991, Coretta Scott King signed a letter addressed to Sen. Doubling The Minimum Wage May Seem Insane, But It Happened In 1949. Even as he’d confidently promised before television cameras in January that he would deliver an astounding increase in the minimum wage, the president knew it would be a difficult fight. 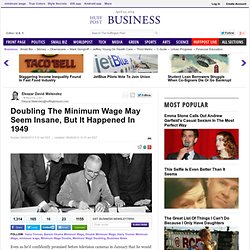 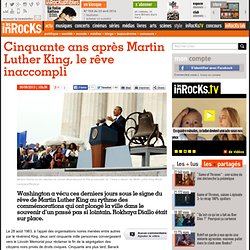 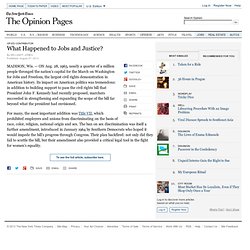 The ban on sex discrimination was itself a further amendment, introduced in January 1964 by Southern Democrats who hoped it would impede the bill’s progress through Congress. Their plan backfired: not only did they fail to scuttle the bill, but their amendment also provided a critical legal tool in the fight for women’s equality. The message of the march still resonated in 1965, when Congress passed the Voting Rights Act, Medicare and Medicaid, key features of President Lyndon B. Harry Belafonte Reflects On The 50th Anniversary Of The March On Washington. Over the last year Harry Belafonte’s inter-generational feud with Jay Z has brought much attention to the image of today’s celebrities. 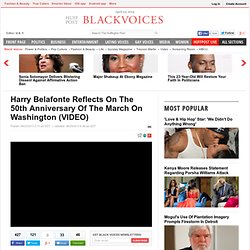 And although the acclaimed entertainer and activist expressed his great distaste for some of today’s high-profile artists’ sense of social responsibility, he has celebrated others in the past for revealing America’s strengths. With the 50th anniversary of the March on Washington steadily approaching, Belafonte opened up to Smithsonian magazine during an interview to explain some of the things that he was most impressed about while attending the historical rally half a century ago. “When you looked out at the large crowd and saw so many young faces that were white, and so many that were senior citizens. 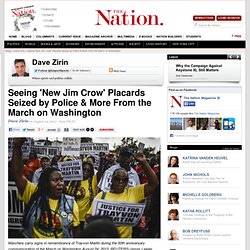 Witnesses to History, 50 Years Later. For Many Who Marched in 1963, Progress Has Seemed Fitful. And in August 1963, he found himself standing beside the Reflecting Pool with tens of thousands of others listening to the Rev. Dr. Martin Luther King Jr. deliver one of the most famous speeches in American history. “I felt that this was the beginning of a new era for black Americans, that whites would respect blacks more,” said Mr.

Smith, whose story exemplifies the journey of millions of black Americans. “From then on, I thought, America is America, it has become what the Constitution stands for.” Wiley A. Branton/Howard Law Journal Symposium - Video Part 4. Thinking on His Feet. George Tames/The New York TimesThe Rev. Dr. Martin Luther King Jr. in 1963. There are hundreds of thousands of carefully preserved manuscripts and recordings that chronicle every speech, interview and public appearance made by one of America’s greatest orators, the Rev. Dr. Martin Luther King Jr. King’s Dream Remains an Elusive Goal; Many Americans See Racial Disparities.

Five decades after Martin Luther King’s historic “I Have a Dream” speech in Washington, D.C., a new survey by the Pew Research Center finds that fewer than half (45%) of all Americans say the country has made substantial progress toward racial equality and about the same share (49%) say that “a lot more” remains to be done. Blacks are much more downbeat than whites about the pace of progress toward a color-blind society. They are also more likely to say that blacks are treated less fairly than whites by police, the courts, public schools and other key community institutions. While these differences by race are large, significant minorities of whites agree that blacks receive unequal treatment when dealing with the criminal justice system. Race Equality Is Still a Work in Progress, Survey Finds.