Are Chinese Teachers Tough Enough for our Children? Apparently Not. Back in the Seventies a group of volunteers was transformed overnight into a pack of sadists, simply because they were asked to play the part of prison guards in a psychological experiment. 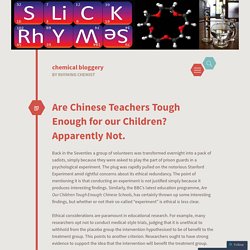 The plug was rapidly pulled on the notorious Stanford Experiment amid rightful concerns about its ethical redundancy. The point of mentioning it is that conducting an experiment is not justified simply because it produces interesting findings. Similarly, the BBC’s latest education programme, Are Our Children Tough Enough: Chinese Schools, has certainly thrown up some interesting findings, but whether or not their so-called “experiment” is ethical is less clear. #BBCtrending: "I refuse to be my daughter's diary" 27 November 2014Last updated at 19:40 ET By BBC Trending What's popular and why One mother's decision to leave a parents' chat app group becomes a big hit online. 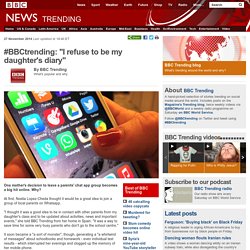 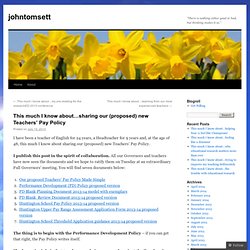 I publish this post in the spirit of collaboration. All our Governors and teachers have now seen the documents and we hope to ratify them on Tuesday at an extraordinary Full Governors’ meeting. You will find seven documents below: The thing is to begin with the Performance Development Policy – if you can get that right, the Pay Policy writes itself. The key principle is that teachers are being assessed against the Teachers’ Standards in their entirety.

We deliberately steered away from drawing up a grid of gradated performance against each Standard and sub-standard – that way madness lies, we thought. A Solution to Poor Discipline in Challenging Schools. My latest blogpost, “How to be bad SMT” has broken all records for the number of hits to my blog. 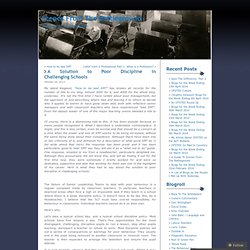 Almost 3000 for it, and 4000 for the whole blog, yesterday. It’s not the first time I have ranted about poor management, but the approach of just describing what’s bad and leaving it to others to decide who it applies to seems to have gone down well, both with reflective senior managers and with classroom teachers who have experienced “bad SMT”. Even the deputy leader of one of the major teaching unions tweeted a link to it. Of course, there is a depressing side to this. It has been popular because so many people recognised it. Dear Secondary school teacher… Dear Secondary school teacher, Hello, I know you don’t really know me, but I was the primary school teacher who spent a year of my life helping to get those first-years ready to come to you. 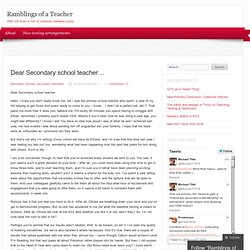 I know… I didn’t do a perfect job, did I? Wp0511.pdf. Tosh and nonsense: why working out what works is not enough. If we knew more about what worked in education how easy would it be to do it? 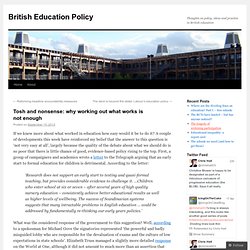 A couple of developments this week have reinforced my belief that the answer to this question is ‘not very easy at all’, largely because the quality of the debate about what we should do is so poor that there is little chance of good, evidence-based policy rising to the top. First, a group of campaigners and academics wrote a letter to the Telegraph arguing that an early start to formal education for children is detrimental. According to the letter: ‘Research does not support an early start to testing and quasi-formal teaching, but provides considerable evidence to challenge it. …Children who enter school at six or seven – after several years of high quality nursery education – consistently achieve better educational results as well as higher levels of wellbeing. What was the considered response of the government to this suggestion? 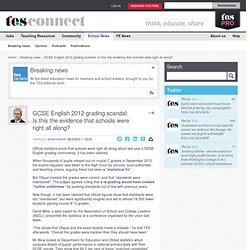 When thousands of pupils missed out on crucial C grades in September 2012. the exams regulator was taken to the High Court by schools, local authorities and teaching unions, arguing there had been a “statistical fix”. But Ofqual insisted the grades were correct, and that “standards were maintained”. The judges agreed, ruling that a re-grading would have created “further unfairness” by pushing standards out of line with previous years. Now though, it has been claimed that official figures show that standards were not “maintained”, but were significantly tougher and led to almost 18,000 fewer students gaining crucial A*-C grades. David Blow, a data expert for the Association of School and College Leaders (ASCL), presented the statistics at a conference organised by the union last week. The ASCL leadership also distanced itself from Mr Blow's comments. Majority of pupils forced to resit at flagship academy. Letters: Cheating and other ways to improve school performance.

Timeline Photos. Teachers fear knowledge is 'threatening and oppressive' SDupp : @uk_teacher @MarieWallace7... Maths advantage for pupils who read for pleasure. 11 September 2013Last updated at 06:51 ET By Katherine Sellgren BBC News education reporter The influence of reading for pleasure was greater than that of having a parent with a degree, the study indicated Children who read for pleasure are likely to do better in maths and English than those who rarely read in their free time, research suggests. 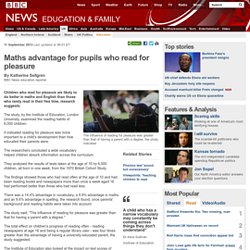 The study, by the Institute of Education, London University, examined the reading habits of 6,000 children. Brookings. What Message Are We Sending With Our First Contact With Parents? Cc licensed ( BY NC ND ) flickr photo by Peter Gerdes: Crossposted at “The Wejr Board” blog. 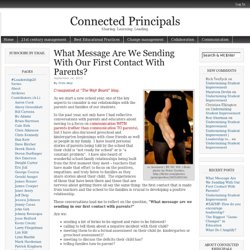 As we start a new school year, one of the key aspects to consider is our relationships with the parents and families of our students. Michael Gove is patronising, insulting, nasty, wrong and arrogant: Paul Routledge column - Paul Routledge. It isn’t easy to be patronising, insulting, nasty, wrong and arrogant all in one sentence but one top Tory is up for it. 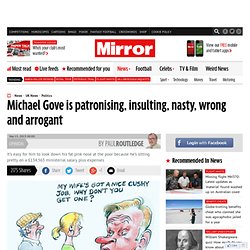 Michael Gove, the poison dwarf of the Coalition, sneered at people forced to use food banks. “They are not best able to manage their finances,” he told a stunned House of Commons. This is a variation on the traditional Conservative theme that the poor are to blame for their own poverty. Not the employers who pay crap wages, or the Government taking an axe to family ­benefits, or the greedy gas and electricity profiteers, but the hungry, the broke and the destitute. What Message Are We Sending With Our First Contact With Parents? How Teachers Can Stop Being Scared Of Twitter. November’s EdTechTeacher’s iPad Summit (which, by the way, I found through Twitter) completely amazed, overwhelmed, challenged, and inspired me.

I left feeling empowered about the 1:1 iPad environment in which I was teaching and excited about the possibilities of technology inside and outside of my classroom. My Twitter Addiction.

Beeban Kidron: 'We need to talk about teenagers and the internet' When Beeban Kidron makes a film, she says, she always tends to start on the street. InRealLife, which is a film no parent and no teenager should miss, began in exactly that way. She went out with her camera and started talking to a group of lads in London. "What is the best thing about the internet? " Schools should build 'character', say parents. 2 September 2013Last updated at 07:52 ET By Judith Burns BBC News education reporter Parents want schools to build character as well as deliver academic results, suggests poll Most parents want schools to encourage values such as honesty and fairness in pupils, a survey suggests. Separating neuromyths from science in education - opinion - 02 September 2013. Are you a creative, right-brain type? Do you learn best visually? These are all neuromyths that badly need debunking, says a UK teacher and writer WHEN it comes to making the classroom more "scientific", there is good, solid research into the best ways of helping children with dyslexia or autism, or encouraging kids to become bilingual.

And then there's the other stuff. Having recently completed my book Teacher Proof, which looks at whether research translates into the classroom, I now have so-called educational neuroscience right at the top of my hit list. The Back to School Speech Every Teacher Should Hear. It's been interesting watching the various ways schools and districts kick off the new year. Some begin in a very low key fashion with staff meetings and prep time. Others start with professional development for large or small groups, and some bring together the entire district in a pep rally atmosphere. I'm not sure there's a right way or a wrong way but in most cases, leadership tries to convey a common, if not inspirational, message to set the tone for the upcoming school year.

So I got to thinking, what message would I like to hear from leadership? I decided to write it out. Influencesonstudent2C683_1_.pdf. University launches online course with TV show. 5 September 2013Last updated at 07:52 ET By Sean Coughlan BBC News education correspondent A university course will be based on TV show the Walking Dead Can zombies be the stuff of serious academic study? And could they be shuffling towards a new type of future for higher education? Universities should educate – employers should train. Education in brief: private school's £5m debts paid off as it becomes an academy.

Teachers! What would evidence based practice look like? I was asked by Michael Gove (Secretary of State for Education) and the Department for Education to look at how to improve the use of evidence in schools. Third of GCSEs taken in private schools graded A* Social media: what role should schools play in keeping children safe? Head leaves academy sponsored by elite Wellington College after GCSE results slump. It is one of the most high profile partnerships between a state and private school in the country, but Wellington Academy - sponsored by the elite Wellington College - has announced the departure of its headteacher after a dramatic fall in GCSE results.

Andy Schofield, who was founding principal of the academy, has stepped down from his position after four years due to what the College called a “decline” in academic progress. The news will come as a significant blow not just to Wellington College and its master Anthony Seldon, but also to education secretary Michael Gove and even prime minister David Cameron, who have both lavished praise on the private school for sponsoring the academy. In a speech in 2011, Mr Gove used Wellington's example to put pressure on other private schools to sponsor academies, asking the question: "If you're so good, why is Anthony Seldon proving that he is better at transforming state education than you are?

" Why teachers don’t (necessarily) know best. Separating neuromyths from science in education - opinion - 02 September 2013. Graham Bett (GrahamBett) sur Twitter. Pupils with D in English or maths forced to continue studying but won't have to sit exams. Faith schools cannot continue their immoral policy of discrimination. "How are the mighty fallen! " is a biblical verse that will not only be well-known by the Roman Catholic state school, the London Oratory, but now applies directly to them. The school – famously chosen by both Tony Blair and Nick Clegg for their sons – has just been criticised by the Office of the Schools Adjudicator for breaching the schools admissions code and ordered to change its policy.

Thwart the Grim-Reaper: #Ofsted reworks (Sep ’13) Here are some key Ofsted (September 2013) updates relevant to teaching and learning in the classroom. Evidence-Based Education. Contemplating Headship. Monday 2 September (with tweets) · BBCr4today. Poverty significantly saps our mental abilities say researchers. Why teachers don’t (necessarily) know best. In which I consider the implications of applying the principles of AfL to lesson observations. AndySawfordMP : Michael Gove would rather not... How do I want to be performance-managed. OfQual Insights: More thoughts on exams. 'Learning for earning' tables to tell pupils which subjects pay. Inequality in Britain: too many children are born to fail. Why? Letters: GCSE results and the unsustainable pressure on our children. Schools moving to 'easy' IGCSE exams to boost grades. Home - Welcome. ENG. Half of teenagers sleep deprived, say experts.