Watch TV Shows & Movies Online. Amazon PRIME. DocPlay - Watch hundreds of the world's best documentaries online. Tubi is the largest free movie and TV streaming service in the US. We are not available in Europe due to changes in EU laws. MUBI: Regardez et découvrez le Cinéma. Binge: Foxtel's New TV Streaming Service Has Arrived - Reviews.org AU. Welcome to Digital Theatre+ Disney+ streaming service reveals Australian launch date and pricing. Disney has revealed it will launch its anticipated streaming service in Australia on November 19, only one week behind its US live date. 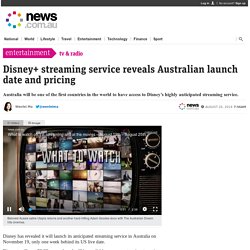 Disney+ will cost $8.99 a month and will be available across most major streaming devices, including Apple phones, iPads and Apple TV, Google devices such as Android phones, Chromecast and Android phones, Xbox One and PlayStation 4. Of all the forthcoming streaming platforms, Disney+ is seen as the most formidable challenger to Netflix given its global brand and heritage. Australia is among the first five markets for Disney+ alongside the US, Canada, Netherlands and New Zealand. The company said the rest of the world was expected to be granted access within the first two years of launch. Earlier this year, Disney confirmed a raft of the exclusive content for Disney+, including five Marvel Cinematic Universe TV shows based on characters made popular from the films such as Loki and Scarlet Witch. There will also be a High School Musical spin-off series.

Australia's Science Channel. Science - Official Site. Channel 10 streaming: 10 All Access launch date, price, CBS shows. IF YOU already think there are too many streaming services, here comes another begging for your money. 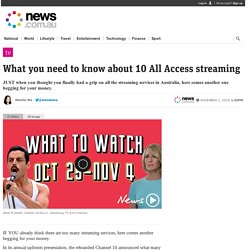 In its annual upfronts presentation, the rebranded Channel 10 announced what many in the market had been anticipating for months — a new subscription streaming service to try to rival Netflix and Stan. The service, 10 All Access, will launch in December with 7000 TV episodes in its library including archive episodes of CBS shows NCIS, Cheers and Frasier as well as Australian content such as Neighbours, The Bachelor and The Living Room. Channel 10 hasn’t revealed how much the service will cost. Other streaming services in Australia range from $5.99 a month for Hayu to $104 for the all-inclusive Foxtel Now package. Its American parent company CBS’s paid streaming service in the US, CBS All Access, charges $US5.99 for a monthly service with ads and $US9.99 for an ad-free option, but that library is considerably larger. Snapchat TV: can the ailing app's new five-minute shows rescue it? A few short years ago, Snapchat was the messaging app on everyone’s filler-heavy lips, a place where Gen Y and Z alike shared ephemeral selfies and collections of pictures and videos that made up the “stories” of their everyday lives. 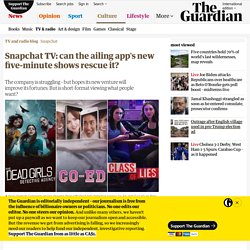 However, a much-hated redesign, an offensive poll about Rihanna, and Instagram competing with its trademark disappearing posts has left it teetering on the precipice of MySpace-circa-2009 status. Indeed, the company’s stock reached an all-time low earlier this week, with shares down 74% on their March 2017 peak. As such, the company’s latest venture – a slate of original TV shows hosted on the platform – doesn’t seem to be so much a fun new feature as a last-ditch attempt to claw back some users. If you’re the sort of person who likes to get stuck into a meaty hour of telly, then the answer is probably not: each episode is just five minutes long. The experience isn’t all bad, though. Neither show is outstanding, but nor are they horrendous. Ten daily. Australia TV Stations - Watch Online. How To (Legally) Download Or Stream Movies For Free. It's easy to find movies to download or stream; even for law-abiding popcorn munchers! 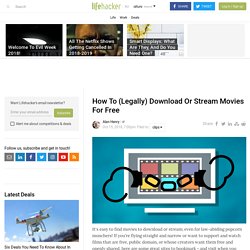 If you're flying straight and narrow or want to support and watch films that are free, public domain, or whose creators want them free and openly shared, here are some great sites to bookmark - and visit when you want something new to watch. Illustration by Nick Criscuolo. #10 SBS On Demand / ABC iView. Top 16 TV and Movie Streaming Sites Available in Australia. Online TV and movie streaming services are now a normal thing in Australia with a majority of households having access to at least one streaming service. 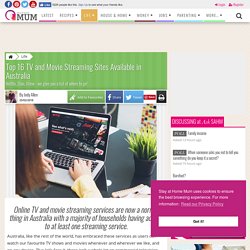 Australia, like the rest of the world, has embraced these services as users can watch our favourite TV shows and movies whenever and wherever we like, and on any device. Plus let’s face it, there isn’t a whole lot on commercial television these days! Most of these services are somewhat affordable compared to the olden days where you had to pay $7 to rent a DVD at the local video store. We have a list of free and paid streaming services, and the pros and cons of each! Free Streaming Services: 1. When ABC launched iView, nobody expected that it would leave a massive impact on the TV and entertainment industry. Pros. 4K streaming Australia: Foxtel, Apple, Netflix, Stan 4K content. IT’S TOUTED as the next evolution of television, and promises to deliver millions more pixels than its predecessor, unprecedented colour depth and contrast, higher refresh rates, and images so sharp you can inspect individual blades of grass or count a protagonist’s beard hairs. 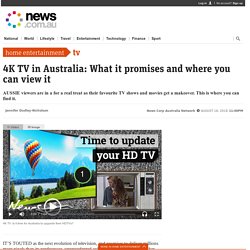 Yet despite its promise, 4K television has traditionally been tricky to secure in Australia. Streaming 4K services only worked for those with broadband connections fast enough to deliver it, and film buffs who craved the best 4K experience had to pay to repurchase their favourite movies on 4K Blu-ray Discs. MORE: This is why you should buy a $4000 TV While Foxtel’s upcoming 4K television broadcasts will solve the issue for many TV purists, experts warned the message could take time to filter through to all consumers who had previously filed 4K TV in the too-hard basket. 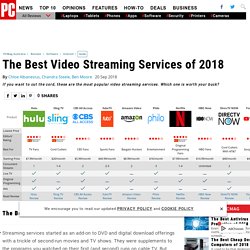 They were supplements to the programs you watched on their first (and second) runs on cable TV. Streaming TV in Australia: Compare Services and Find Amazing Deals! Back in the day, pickens were slim Down Under when it came to streaming TV over the internet. 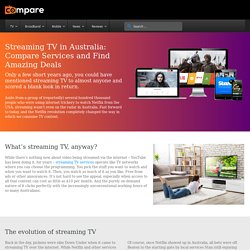 While Netflix and other services had been making big waves in the US for several years, there weren’t any type of similar services available in Australia. Or so many thought. Quickflix, a mail-order DVD rental company, had seen the effect Netflix was having on the US market and decided to move into streaming themselves – years before streaming became the thing everyone was doing. They weren’t alone, either. How to find the best TV and movie streaming service for you.

How do I stream video online? 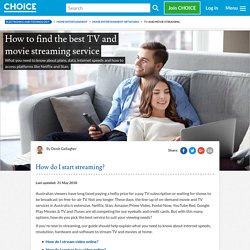 Streaming means watching as you download, whereas "downloading" a video usually refers to permanently storing the file on your device for watching at a later time. Quickflix: The Biggest Movies First. Kanopy. Beamafilm.