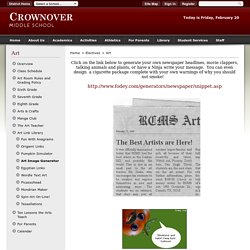 You can even design a cigarette package complete with your own warnings of why you should not smoke! Designcollector. Moscow based multidisciplinary designer and architect. 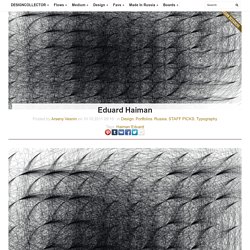 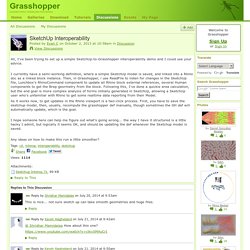 I currently have a semi-working definition, where a simple SketchUp model is saved, and linked into a Rhino doc as a linked block instance. Then, in Grasshopper, i use ReadFile to listen for changes in the SketchUp file, Lunchbox's RhinoCommand component to update all Rhino block external references, several Human components to get the Brep geormetry from the block. 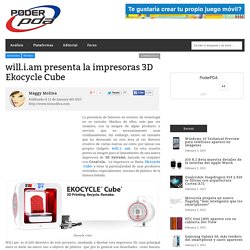 Randomly Generated Polygonal Insects by ‘Istvan’ for NeonMob. Created by designer Istvan Giordano of Chaotic Atmosphere, these geometric insects are a beautiful exercise in fictional biology, code, and digital illustration. 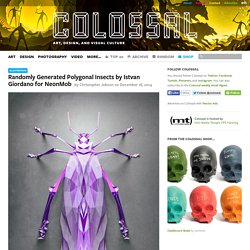 The collection of nearly 100 organisms with day/night variations is titled Biotop from Polygonia was made in Cinema 4D using random values within parameters designed by Giordano. You can see the full series over on NeonMob, a digital platform for discovering, collecting, and trading art online. (via Laughing Squid) Chaotic Atmospheres on Behance. 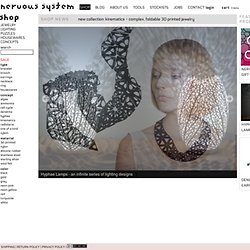 Filter Forge - Theo Van Doesburg grid or maze like compositions made inside FF? And you have done TWO different versions, that are complementary, and looks good. 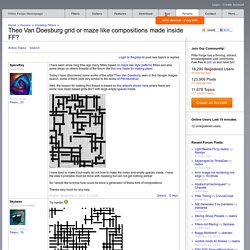 Until now I have only used first one that is the nearest from the example image shown above in first post and for me works better than the second version, although this does not mean that I do not like the second, is also very good idea, has a great potential, and like it but it needs more work and made better. Well, before putting this thread, I already tried 5 different ways to find how I could do this filter that was not really complex, and I thought I could do it, but then I could not know how to make the masking and got some grids but without missing parts. After seeing HOW you have done it, I must agree with you have said already in other posts and threads, I am overcomplicating things and some things that are mainly simply I try to find a complex way to make it, and the solution is perhaps and probably sometimes much easier. Dream House Architecture Design, Home Interior & Furniture Design. Laura Andreo has sent to us post submission about unique and colorful digital bookshelves design ideas named “Parametric Bookshelves”. 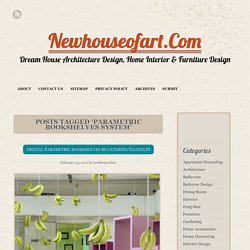 This modern furniture pieces is designed by Caterina Tiazzoldi that uses advanced digital design techniques, and developed by the experience as director of the Advanced Research Lab NSU at the School of Architecture at Columbia University, to accomplish a formal exploration of innovative configurations of a creative bookshelf. When every customer want to buy this bookshelves, they able to make a customization, such as introduces data (length and height dimension, preferred colors option) and the parametric system responds with automatically changing various of the attributes (depth, thickness, color saturation).

Ferrofluid - Wikipedia, the free encyclopedia. Ferrofluid on glass, with a magnet underneath. 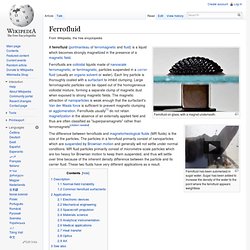 Ferrofluid has been submersed in sugar water. Sugar has been added to increase the density of the water to the point where the ferrofluid appears weightless A ferrofluid (portmanteau of ferromagnetic and fluid) is a liquid which becomes strongly magnetized in the presence of a magnetic field. Ferrofluids are colloidal liquids made of nanoscale ferromagnetic, or ferrimagnetic, particles suspended in a carrier fluid (usually an organic solvent or water).

Each tiny particle is thoroughly coated with a surfactant to inhibit clumping. Description[edit] Ferrofluid is the oily substance collecting at the poles of the magnet which is underneath the white dish. True ferrofluids are stable. The term magnetorheological fluid (MRF) refers to liquids similar to ferrofluids (FF) that solidify in the presence of a magnetic field. However, ferrofluids lose their magnetic properties at sufficiently high temperatures, known as the Curie temperature. Generative french - Buscar con Google. 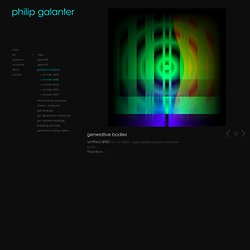 Along with the mounted images a computer is installed running a simplified version of the software used to create the panels. This allows visitors to evolve their own generative variations. Generative Bodies is as much about the generative process as it is the final results, and the hope is that the interactive program will combine with the panels to deliver an experience grounded in both formalism and dynamism. The Generative Bodies panels are created using software simulates biological evolution. It is an elaboration of Karl Sim's original work treating mathematical expressions as genes. Note that each body is proportioned according to the 3 traditional human generative centers: the brain, heart, and genitals.

Temari spheres. Generative Architecture - Rainbow City. De identitate. Meta-knowledge: A Method to Encode and Decode Products’ DNA in Knowledge Lifecycle WANG Wei, Ph.D Candidate School of Design, Hunan University, Changsha, China e-mail:yien_killer@hotmail.com Prof. A snow of butterflies: home. DepotArt. Generative Design. Faber Finds generative book covers. Generative art. Joseph NechvatalOrgiastic abattOir,2004 computer-robotic assisted acrylic on canvas created by viral-based C++ software Installation view of Irrationnal Geometrics 2008 by Pascal Dombis Generative art refers to art that in whole or in part has been created with the use of an autonomous system. An autonomous system in this context is generally one that is non-human and can independently determine features of an artwork that would otherwise require decisions made directly by the artist. In some cases the human creator may claim that the generative system represents their own artistic idea, and in others that the system takes on the role of the creator.