Resources for Teaching about Plate Tectonics 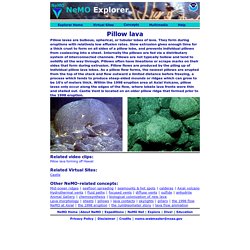 They form during eruptions with relatively low effusion rates. Slow extrusion gives enough time for a thick crust to form on all sides of a pillow lobe, and prevents individual pillows from coalescing into a sheet. Internally the pillows are fed via a distributary system of interconnected channels. Pillows are not typically hollow and tend to solidify all the way through. Pillows often have lineations or scrape marks on their sides that form during extrusion. GalAPAGoS: Where Ridge Meets Hotspot. Over time, the height, width and thickness of a chimney structure builds around the vent flow while the temperature and chemical composition of the hydrothermal fluid varies. 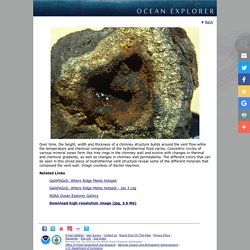 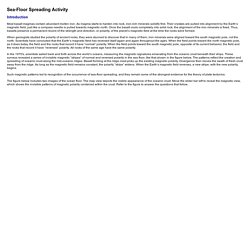 As magma starts to harden into rock, iron-rich minerals solidify first. Their crystals are pulled into alignment by the Earth’s magnetic field, just like a compass needle is pulled towards magnetic north. Mid-Ocean Ridge Activity. This activity consists of naming the continents, identifying mid-ocean ridges, and determining the age of the ocean floor. 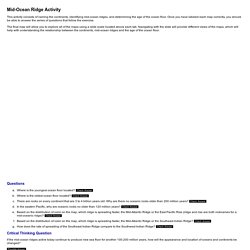 Once you have labeled each map correctly, you should be able to answer the series of questions that follow the exercise. The final map will allow you to explore all of the maps using a slide scale located above each tab. Mid-Ocean Ridges. Magnetization of the Sea Floor and Seafloor Spreading Animation - Earthguide: Online Classroom. Tectonic Plates, diagrams redesign. Ccean crust. Geologic Resources » Education. Plate Tectonics Fault Types Learn what the different fault types are and what the difference between the Hanging Wall and Foot Wall in these illustrations. 310 KB JPEG Source: Trista L. 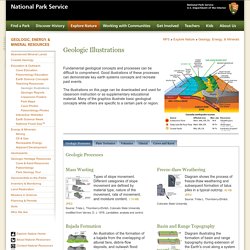 Thornberry-Ehrlich, Colorado State University Types of Folds Rocks deform under stress from crustal movement and sometimes bend the rock layers into folds. Map of Tectonic Plates The Earth is made up of roughly a dozen major plates and several minor plates. Convergent Plate Boundary When two plates collide together it forms a convergent plate boundary. Subduction Zone At a convergent plate boundary the older, more dense crust will sink, or "subduct" under the other. Cascadia Subduction Zone. Geologic Resources » Education. Plate Tectonics: Shaping the Continents. Plate Boundaries: Divergent, Convergent, and Transform. Plate Movement: 200 Million Years Ago to Present Day. Educator Guide: Exploring Earthquakes. What are earthquakes? 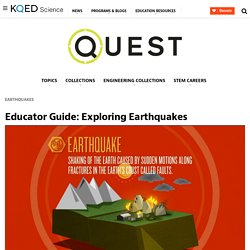 Get a new perspective on these powerful phenomena with our collection of videos and infographics co-produced with KQED, originally designed with middle and high school educators in mind. You and your students will learn why earthquakes happen, how they’ve shaped the Bay Area, and what you can do to prepare for the next one. We’ve included ideas for how to structure a sequence of learning tasks, but feel free to pick and choose! Whether you want to use the Exploring Earthquakes resources with students or to polish your own content knowledge, the following guide provides ideas for how to get started. 1. Core, Mantle and Crust Before learning about earthquakes, let’s look at the inside of our planet. View the video Inside the Earth: Exploring Earth’s Layers and consider the following questions: What are distinct characteristics of each layer? 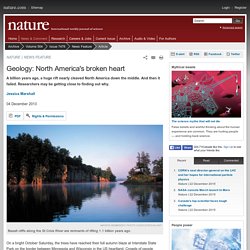 On a bright October Saturday, the trees have reached their full autumn blaze at Interstate State Park on the border between Minnesota and Wisconsin in the US heartland. Crowds of people gawking at leaves thread their way along paths that wind through bulwarks of dark basalt, leading to views of the St Croix River. Along one of the walkways, a photographer directs a young couple in coordinating grey shirts to lean against the rocks as she snaps a romantic portrait. If the two sweethearts are looking to commemorate their everlasting love, they should have picked a different backdrop. The fractured basalt that frames their faces is part of a great gash that opened up in the middle of North America and nearly split the continent 1.1 billion years ago — hardly a symbol of a happy union. The volcanic rocks are remnants of what is called the Midcontinent Rift, and it is an enormous geological puzzle.