Gentrification Pro and Con: Is it Screwing up Los Angeles and Hurting the Poor? Or Making Life Better? [Editor's note: What better topic than gentrification to split people in Los Angeles into distinct camps? 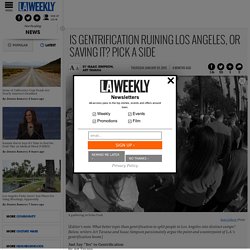 Below, writers Art Tavana and Isaac Simpson passionately argue the point and counterpoint of L.A.'s gentrification boom.] Just Say "Yes" to Gentrification By Art Tavana Angelenos are sun-addicted colonizers who expect the pristine charm of their Victorian homes in Echo Park, the hippie stank of Venice, and daily weather patterns to respond to their personal preferences.

When someone interferes with their self-entitled chi, they freak out and rely on loaded words like "gentrification" to identify the boogeyman: middle-class hipsters. Angelenos don't know their history from a 99-cent store: Before the film studios, in the mid-1800s, ranches and prostitution houses reigned. 1.

Allison Anders' 1993 film Mi Vida Loca wasn't just a fictional depiction of gang life, it documented a time when low-flying police helicopters would haunt families living near Echo Park Lake. 2. The gentrification of Skid Row - a story that will decide the future of Los Angeles. In the centre of one of the world’s most high-profile cities lies a concentration of desperate poverty unlike any other in the developed world. 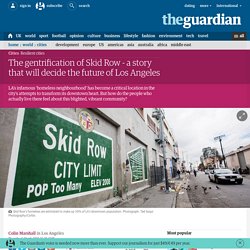 Los Angeles’s Skid Row, a common name for a once-common form of down-and-out quarter in American cities, persists as the last neighbourhood of its kind. Skid Row’s very existence illustrates a major planning mistake the southern Californian metropolis made in the past. The struggles over what to do with it now reveal the extent of the challenge facing LA in its current transformation into a denser, more traditionally urban city. It’s no exaggeration to call Skid Row one of the main battlegrounds for the future of Los Angeles. The neighbourhood went from metaphorical to literal battleground last Sunday when, on a rare rainy day in this city, an altercation with Los Angeles Police Department officers resulted in the death of a 45-year-old resident.

We know the victim lived in a tent; he’d pitched it near the corner of San Pedro and 6th street. Viva Gentrification! LOS ANGELES — FOR years, our family journeys have taken us from our hillside home, in the multiethnic Mount Washington district of northeast Los Angeles, into the flatlands of the Latino barrios that surround it. 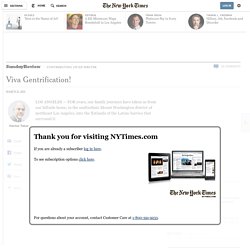 Gentrification May Be Complicated, But It’s Not a Myth. In a recent Slate article, John Buntin, a correspondent for Governing magazine, argues that gentrification is a myth, a claim that we’ve certrainly heard before. 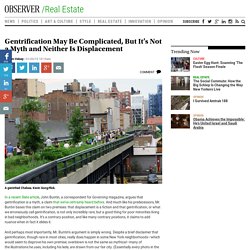 And much like his predecessors, Mr. Buntin bases this claim on two premises: that displacement is a fiction and that gentrification, or what we erroneously call gentrification, is not only incredibly rare, but a good thing for poor minorities living in bad neighborhoods. It’s a contrary position, and like many contrary positions, it claims to add nuance when in fact it elides it. And perhaps most importantly, Mr. Buntin’s argument is simply wrong. “It started in Soho, then moved to Chelsea and the East Village. Mr. Because, he claims, poor people of color aren’t being displaced by well-off white people at all: “Simply documenting that low-income people were being forced out of a neighborhood whose housing prices were rising didn’t mean in and of itself that gentrification was causing displacement, ” he writes. 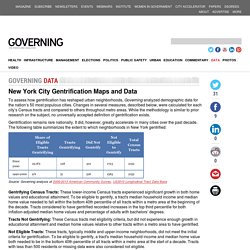 Changes in several measures, described below, were calculated for each city’s Census tracts and compared to others throughout metro areas. While the methodology is similar to prior research on the subject, no universally accepted definition of gentrification exists. Gentrification remains rare nationally. It did, however, greatly accelerate in many cities over the past decade. The following table summarizes the extent to which neighborhoods in New York gentrified: Gentrifying Census Tracts: These lower-income Census tracts experienced significant growth in both home values and educational attainment. Tracts Not Gentrifying: These Census tracts met eligibility criteria, but did not experience enough growth in educational attainment and median home values relative to other tracts within a metro area to have gentrified. Map Key Map Data Definitions. The Gentrification Effect. When Marion Barry first became mayor of Washington in 1979, the city was more than 70 percent black. 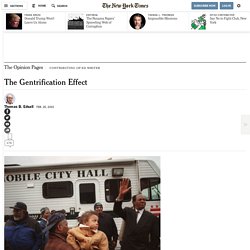 Whites made up 26.9 percent of residents; 2.8 percent were Hispanic. When Barry died on Nov. 23, Washington had lost its claim to the title Chocolate City. The black population had fallen below 50 percent, the percentage of whites had grown to 35.8 percent and the Hispanic population had reached 10.1 percent. To see the full article, subscribe here. With the new black flight to the suburbs following decades of white flight, Hispanics will have an ever bigger role to play in big city politics and even in the suburbs.