Your Genes: More Virus than Human. The Virus as a Planetary Force. Faecal transplants used to cure Clostridium difficile. 11 December 2011Last updated at 23:59 By James Gallagher Health reporter, BBC News Transplanting faecal matter from one person to another - the thought might turn your stomach, but it could be lifesaving. 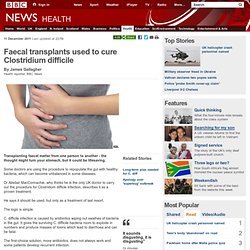 Some doctors are using the procedure to repopulate the gut with healthy bacteria, which can become unbalanced in some diseases. Dr Alisdair MacConnachie, who thinks he is the only UK doctor to carry out the procedure for Clostridium difficle infection, describes it as a proven treatment. He says it should be used, but only as a treatment of last resort. The logic is simple. C. difficile infection is caused by antibiotics wiping out swathes of bacteria in the gut. The first-choice solution, more antibiotics, does not always work and some patients develop recurrent infection. The theory is that by adding more bacteria to the bowels, they will compete with C. difficile bacteria and control the infection.

The procedure Dr MacConnachie inserts a tube up the patient's nose and down to the stomach. The wonder of breasts. We love breasts, yet can't quite take them seriously. 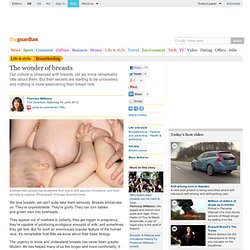 Breasts embarrass us. They're unpredictable. They're goofy. They can turn babies and grown men into lunkheads. They appear out of nowhere in puberty, they get bigger in pregnancy, they're capable of producing prodigious amounts of milk, and sometimes they get sick. The urgency to know and understand breasts has never been greater. Say Hello to the 100 Trillion Bacteria That Make Up Your Microbiome. History, Travel, Arts, Science, People, Places. I had the bacteria in my gut analysed. And this may be the future of medicine. We are all familiar with "gut feelings", "gut reactions" and "gut instincts", but how much do we really know or care about our guts? 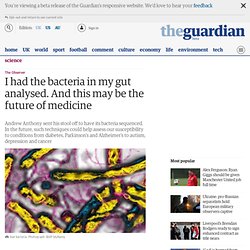 As we become increasingly more aware of what we put in our stomachs, it's striking how ignorant we remain of what takes place in our intestines. And it turns out there is an awful lot going on down there. Microbiologists have made some startling advances in revealing our innermost secrets. It turns out that there is a complex ecosystem deep within us that is home to a fantastic diversity of life – of which very little belongs to our species. For most of us, suspicious of foreign bodies, it's a struggle to comprehend that at our very core we are less than – or rather much more than – human. That means there is a tremendous amount of us that is not, so to speak, us. Well, I wasn't much concerned about bacteria before I got the contents of my gut tested.

"I realised I needed to study the whole canvas," he says. These fatty acids are beneficial to the body. Human Microbiome Project - Overview. Microscopic study of the healthy human body has demonstrated that microbial cells outnumber human cells by about ten to one. 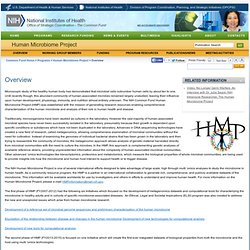 Until recently though, this abundant community of human-associated microbes remained largely unstudied, leaving their influence upon human development, physiology, immunity, and nutrition almost entirely unknown. The NIH Common Fund Human Microbiome Project (HMP) was established with the mission of generating research resources enabling comprehensive characterization of the human microbiota and analysis of their role in human health and disease. Traditionally, microorganisms have been studied as cultures in the laboratory. The Invisible Universe. Your body is an ecosystem. Humans: 10% Human and 90% Bacterial. We are moving from a multi-decade focus on killing ALL bacteria via soaps, detergents, antibiotics and hand sanitizer, to a new understanding of the complex bacterial system in our bodies and in the world around us.

We now understand that humans are 90% microbial but only 10% human. The average human has over 100 trillion microbes in and on their body, and many of the latest discoveries are challenging previously held ideas about good and bad bacteria. We are witnessing the shift from a World ruled by the antibacterial obsessed and non-stop antibacterial marketing, to one that has a heightened awareness of the importance of the microbial ecosystem (the microbiome). In sparks and honey’s recent report, Time to Get Dirty: Why the Ancient Wisdom of Microbes is the Future of Health, we explore five emerging areas that are shaping the conversations and debate around the microbiome. The ecosystem inside you. Alien-like life forms that make up 90% of our living cells. By Daily Mail Reporter Updated: 16:18 GMT, 19 May 2011 We are only 10% human the rest is pure microbe, reveals microbiologist You may think these alien-looking bacteria would be unwelcome guests, but these lifeforms actually make up 90 per cent of the living cells in our bodies. 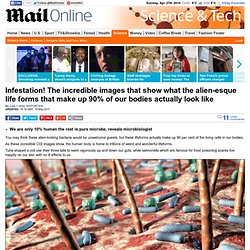 As these incredible CGI images show, the human body is home to trillions of weird and wonderful lifeforms. Tube shaped e.coli use their three tails to swim vigorously up and down our guts, while salmonella which are famous for food poisoning scares live happily on our skin with no ill effects to us. Computer artwork of bacteria (blue and green) on human skin. A magnified conceptual visualization of multiple coccus bacteria on a cellular surface. Our relationship with the single-celled friends is so strong that some scientist have come to regard us and our hitchhikers as one human-bacteria super-organism. Cork Institute of Technology lecturer, Dr Roy D. Human Wildlife: The Life That Lives on Us by Robert Buckman.