Mapping the human epigenome in pursuit of medical breakthroughs. VANCOUVER, BC — Much progress has been made since researchers mapped the human genome over a decade ago. 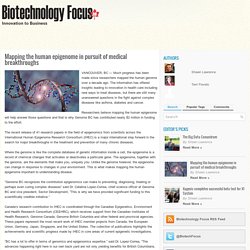 The information has offered insights leading to innovation in health care including new ways to treat diseases, but there are still many unanswered questions in the fight against complex diseases like asthma, diabetes and cancer. Researchers believe mapping the human epigenome will help answer those questions and that is why Genome BC has contributed nearly $2 million in funding to the effort. The recent release of 41 research papers in the field of epigenomics from scientists across the International Human Epigenome Research Consortium (IHEC) is a major international step forward in the search for major breakthroughs in the treatment and prevention of many chronic diseases.

Where the genome is like the complete database of genetic information inside a cell, the epigenome is a record of chemical changes that activates or deactivates a particular gene. A new way to find invasive species. For years, municipalities on southern Vancouver Island, the Lower Mainland and other parts of southwestern BC have been trying to rid pond ecosystems of a ravenous invader—the American bullfrog. 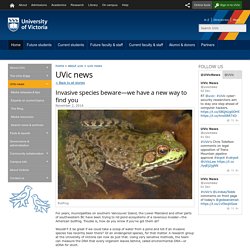 Trouble is, how do you know if you’ve got them all? Wouldn’t it be great if we could take a scoop of water from a pond and tell if an invasive species has recently been there? Or an endangered species, for that matter. A research group at the University of Victoria can now do just that. Using very sensitive methods, the team can measure the DNA that every organism leaves behind, called environmental DNA—or eDNA for short. University of Victoria Team Builds Assay for Measuring Protein Biomarkers in Saliva. NEW YORK (GenomeWeb) – Researchers from the University of Victoria-Genome British Columbia Proteomics Centre and MRM Proteomics have developed an assay for targeted quantitation of proteins in saliva. 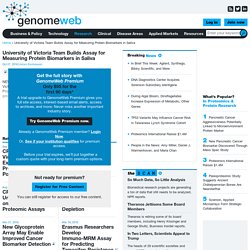 Get the full story with GenomeWeb Premium Only $95 for the first 90 days* A trial upgrade to GenomeWeb Premium gives you full site access, interest-based email alerts, access to archives, and more. Never miss another important industry story. Try GenomeWeb Premium now. Gene-sequencing study to guide recovery of coastal goshawks - News. A juvenile laingi goshawk that suffered two broken wing bones after hitting a window in Sandspit was returned safe and sound to the forests of Haida Gwaii last Thursday. 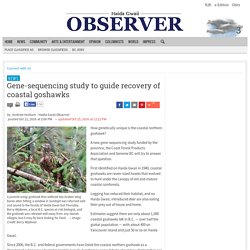 Berry Wijdeven, a local B.C. species-at-risk biologist, said the goshawk was released well away from any islands villages, but it may fly back looking for food. — image credit: Berry Wijdeven How genetically unique is the coastal northern goshawk? A new gene-sequencing study funded by the province, the Coast Forest Products Association and Genome BC will try to answer that question. First identified on Haida Gwaii in 1940, coastal goshawks are raven-sized hawks that evolved to hunt under the canopy of old and mature coastal rainforests. BC researchers partnering w/genomics leader in #China, to speed up development of new treatments. @GenomeBC.

Vancouver hospital signs deal with genomics firm at ‘leading edge of medicine’ A promising future’s in the genes for St. 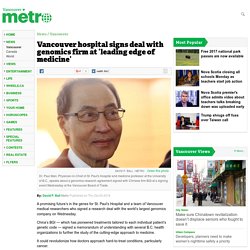 Paul’s Hospital and a team of Vancouver medical researchers who signed a research deal with the world’s largest genomics company on Wednesday. China’s BGI — which has pioneered treatments tailored to each individual patient’s genetic code — signed a memorandum of understanding with several B.C. health organizations to further the study of the cutting-edge approach to medicine. It could revolutionize how doctors approach hard-to-treat conditions, particularly cancer. The international partnership’s aim is “applying next-generation sequencing technologies and big data to accelerate personalized medicine,” according to a release from Providence Health Care, which manages St. Paul’s. Chinese genomics giant enters B.C. health research partnership. Five B.C. health-industry groups have agreed to form a research partnership with Chinese genomics giant BGI to advance medical technologies such as the treatment of cancer, officials said Wednesday. 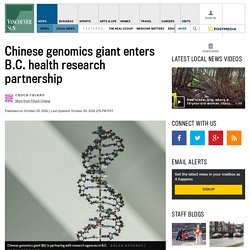 The five groups — Providence Health Care, St. Paul’s Foundation, Vancouver Prostate Centre, Genome BC, and Deloitte — will work with BGI to apply genome-sequencing technology to patient therapy. No specific monetary figure for the partnership or details of the research projects were released. BGI, British Columbia Organizations to Collaborate on Precision Medicine. Anandia Laboratories Raises Investment from Genome BC. 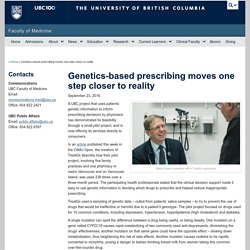 A UBC project that uses patients’ genetic information to inform prescribing decisions by physicians has demonstrated its feasibility through a small pilot project, and is now offering its services directly to consumers. In an article published this week in the CMAJ Open, the creators of TreatGx describe how their pilot project, involving five family practices and one pharmacy in metro Vancouver and on Vancouver Island, was used 236 times over a three-month period.

The participating health professionals stated that the clinical decision support made it easy to use genetic information in deciding which drugs to prescribe and helped reduce inappropriate prescribing. TreatGx uses a sampling of genetic data – culled from patients’ saliva samples – to try to prevent the use of drugs that would be ineffective or harmful due to a patient’s genotype. Mushrooms may hold key in cancer fight. Researchers in Prince George are looking for a little magic in their mushrooms. 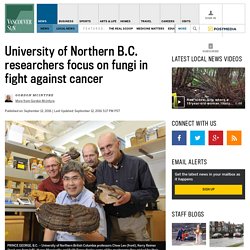 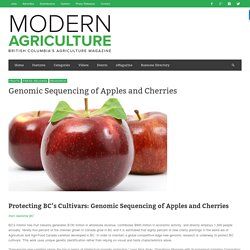 Ninety-five percent of the cherries grown in Canada grow in BC and it is estimated that eighty percent of new cherry plantings in the world are of Agriculture and Agri-Food Canada varieties developed in BC. In order to maintain a global competitive edge new genomic research is underway to protect BC cultivars. This work uses unique genetic identification rather than relying on visual and taste characteristics alone.

Canadian and UK Researchers Team on Genomic Tuberculosis Testing, Reporting Infrastructure. NEW YORK (GenomeWeb) – A collaborative project recently launched by researchers in Canada and the UK is taking aim at a common problem: incorporating genomics into clinical care and making the results of testing easily accessible and interpretable by primary care providers. 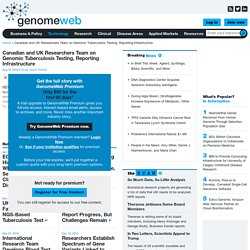 Get the full story with GenomeWeb Premium Only $95 for the first 90 days* A trial upgrade to GenomeWeb Premium gives you full site access, interest-based email alerts, access to archives, and more. Declining BC salmon: science may provide much-needed answers. It was a star-studded launch. B.C. -based biologist Alexandra Morton was elbow-to-elbow with Pamela Anderson of Baywatch fame and environmentalist and broadcaster David Suzuki for the announcement of “Operation Virus Hunt” targeting salmon farms on the B.C. coast this summer. Morton was leaving on a sailboat named the Martin Sheen (after the actor), owned by the controversial Sea Shepherd Conservation Society, which has used tactics such as ramming ships to draw attention to their opposition to whaling. Summer camp gets kids thinking about genetics - Kamloops. Hosting aspiring scientists at summer Geneskool – InsideTRU. Posted on: July 20, 2016 TRU biologist Dr. Jonathan Van Hamme explains genome sequencing machines to Geneskool students.

Genome BC’s Geneskool Summer Camp is underway this week. High school students from Kamloops, Delta, Nanoose Bay, Sun Peaks, Langley, Surrey and Calgary are on the TRU campus taking part in an intensive five-day workshop—with ambitions of becoming the next genetics experts. Students study science to solve murder mystery. KAMLOOPS — High school students are working to solve a murder mystery during a five-day workshop for youth with a keen interest in science.

Seventeen students from schools in BC and Alberta have gathered at Thompson Rivers University for the Genome BC Geneskool Summer Camp this week. Students were presented with a mock crime scene as the camp began this morning, July 18, and began investigating the scene for finger prints, analyzing blood splatters, and collecting clues. The campers will use the forensic evidence to determine what happened before presenting their findings on Friday. As students participate in a variety of labs throughout the week they will learn to gather evidence, use lab equipment, and apply the use of genomics in everyday life. "It's really great because they're learning basic laboratory skills and techniques which you normally wouldn't get until you went to college or university and they're getting that now in high school," camp director Ashley Port said.

BC’s most promising new healthtech companies kick off Hypergrowth program. HeadCheck Health, Navigate Surgical Technologies (NST), and ViewsIQ have been selected by Genome British Columbia and the BC Tech Association to take part in the first-ever HyperGrowth: Life accelerator program cohort. “The selection process was not easy, but the quality of the applications and the strength of the cohort exemplify the future of B.C.’s bioeconomy,” said Dr. Pascal Spothelfer, president and CEO of Genome BC. “The situation is changing because health organizations here are becoming more proactive in using these early-stage companies’ technologies in pilot programs, which can lead to bigger things.” Scientists might have found Heart and Skeletal Muscle Inflammation at a B.C. salmon farm - Campbell River News.