This collection highlights the major themes that are addressed within the "Health and Well-Being" Sustainable Development Goal. 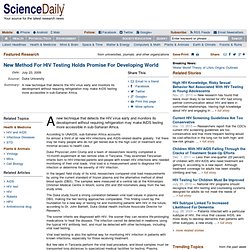 According to UNAIDS, sub-Saharan Africa accounts for almost a third of all new HIV infections and AIDS-related deaths globally. Yet there may be many people who do not get tested due to the high cost of treatment and minimal access to health care. Duke Physician John Crump and a team of researchers recently completed a 10-month experiment at two remote sites in Tanzania. They examined Tanzanian infants born to HIV-infected parents and people with known HIV infections who needed monitoring of their viral loads. Viral load is a measurement used to diagnose HIV infection or determine the severity of HIV infection. View of masculinity may increase HIV risk - Health News - redOrb. July 22, 2009 Seeking medical advice, including being tested for human immunodeficiency virus, goes against many black men’s notion of masculinity, U.S. researchers say. 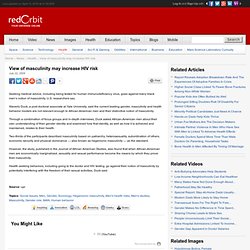 Study links poverty to higher rates of malaria in kids - SciDev.Net Sub-Saharan Africa. Malaria experts have long considered the disease to be affected by socioeconomic factors, so researchers from Sudan and the United Kingdom searched the literature to assess whether socioeconomic status is linked to risk of malaria among children up to 15 years old in endemic countries. 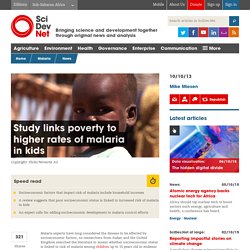 Our objective was to stimulate the thinking about socioeconomic development as a malaria intervention, says Steve Lindsay, study coauthor and a disease ecologist at Durham University, United Kingdom. Lindsay and colleagues searched 4,696 studies published from 1 January 1980 to 12 July 2011 and found 15 studies with statistical data linking malaria risk and socioeconomic development defined to include household assets, household income or parents occupation. Global Malaria (dark) We Can End Malaria. Drugs and Diagnostics The current treatment for malaria is artemisinin-based combination therapies (ACTs). 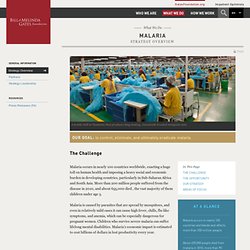 ACTs are effective and are well-tolerated by patients, but because of their high cost, patients often purchase cheaper, less-effective drugs, poor-quality drugs, or counterfeits, all of which can increase the risk that drug-resistant strains of malaria will emerge. Resistance has already been observed in Southeast Asia.

A nurse dispenses a malaria drug to treat an infected child in Tanzania. 6 Bodily Tissues That Can Be Regenerated Through Nutrition. The LifeStraw makes dirty water clean. More than one billion people – one sixth of the world’s population - are without access to safe water supply. 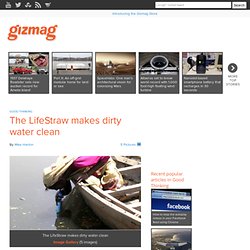 At any given moment, about half of the world's poor are suffering from waterborne diseases, of which over 6,000 – mainly children – die each day by consuming unsafe drinking water. The world’s most prolific killer though is diarrhoeal disease from bacteria like typhoid, cholera, e. coli, salmonella and many others. Safe water interventions have vast potential to transform the lives of millions, especially in crucial areas such as poverty eradication, environmental upgradation, quality of life, child development and gender equality. LifeStraw was developed as a practical response to the billions of people who are still without access to these basic human rights. View all The aptly-named LifeStraw is an invention that could become one of the greatest life-savers in history.

Millions of people perish every year because they simply don’t have clean water to drink. Q1. Q2. Q3. Q4. Successful strategies for reducing malnutrition among young children in East Africa? - 2010 - UNDP. We analyzed the role that health programs played in improving the nutritional status of children aged five years and younger in East Africa during a period when health policies aiming to reduce malnutrition were implemented. 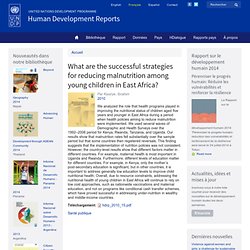 We used several waves of Demographic and Health Surveys over the 1992–2006 period for Kenya, Rwanda, Tanzania, and Uganda. Our results show that malnutrition rates fell substantially over the sample period but that some countries then registered reversals. This finding suggests that the implementation of nutrition policies was not consistent. However, the country-level results show that different factors matter in different countries. More or Less Aid Is Not Africa's Problem...Lack of More African Idealist is. Approaching Zero: How West Africa is Crushing the Ebola Epidemic. A Way To Stop Ebola Discovered! The devastating effects of malaria. Rainwater and Health in Developing Countries: A Case Study on Uganda. David Baguma, Syed Aljunid, Jamal Hashim, Helmut Jung and Loiskandl Willibald UN Photo/Evan Schneider Efforts to increase water supply are not an end in themselves. 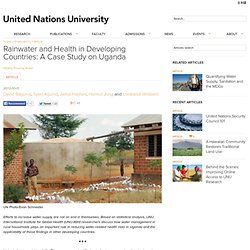 Based on statistical analysis, UNU International Institute for Global Health (UNU-IIGH) researchers discuss how water management in rural households plays an important role in reducing water-related health risks in Uganda and the applicability of these findings in other developing countries. Water is fundamental to all life. Thus, no one can be lifted out of extreme poverty without adequate access to water and sanitation. Moreover, much work is underway towards meeting the Millennium Development Goals (MDGs) by 2015, particularly those emphasizing eradication of extreme poverty and hunger.