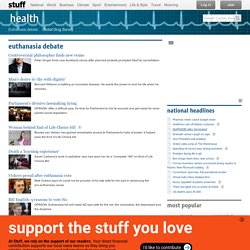 Man's desire to 'die with dignity' Bernard Willems is battling an incurable disease. He wants the power to end his life when he chooses. Parliament's divisive lawmaking tiring OPINION: After a difficult year, it's time for Parliament to lick its wounds and get ready for more painful social legislation. Woman behind End of Life Choice bill Brooke van Velden has gained remarkable access to Parliament's halls of power.

Death a 'learning experience' Sarah Carberry's work in palliative care has seen her do a "complete 180" on End of Life Choice Bill. Vickers proud after euthanasia vote Matt Vickers says he could not be prouder of his late wife for her part in advancing the pro-euthanasia cause. Bill English: 5 reasons to vote No. New Zealand MPs approve 'End of Life Choice' bill, paving way for referendum. Posted 13 Nov 2019, 10:43amWed 13 Nov 2019, 10:43am New Zealanders are bound for a referendum on euthanasia next year after a tight conscience vote in Wellington. 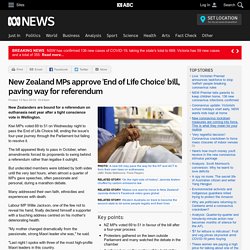 Key points: NZ MPs voted 69 to 51 in favour of the bill after a four-year processProtesters gathered on the lawn outside Parliament and many watched the debate in the chamberA referendum on the matter will be held at the same time as the 2020 NZ election Kiwi MPs voted 69 to 51 on Wednesday night to pass the End of Life Choice bill, ending the issue's four-year journey through the Parliament but failing to resolve it. The bill appeared likely to pass in October, when amendments forced its proponents to swing behind a referendum rather than legalise it outright.

But undecided members were lobbied by both sides until the very last hours, when almost a quarter of MPs gave speeches, often passionate and personal, during a marathon debate. Many addressed their own faith, ethnicities and experiences with death. New Zealand Government referendums 2020 - Cannabis Legalisation and End of Life Choice Act. New Zealand to hold referendum on euthanasia. Image copyright Getty Images New Zealand's parliament has voted in favour of legalising euthanasia, paving the way for a national referendum on the issue next year. 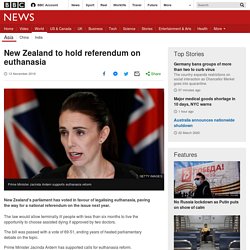 The law would allow terminally ill people with less than six months to live the opportunity to choose assisted dying if approved by two doctors. The bill was passed with a vote of 69-51, ending years of heated parliamentary debate on the topic. Prime Minister Jacinda Ardern has supported calls for euthanasia reform. A recent poll suggested 72% of New Zealanders supported some form of assisted dying. What's in the bill?

Since 2017, there have been eight parliamentary debates and a record 39,000 submissions from the public on David Seymour's End of Life Choice Bill. There have been some alterations to the legislation. Media playback is unsupported on your device It now only covers those diagnosed with less than six months to live, while it previously included severe and incurable conditions. "New Zealanders elect us. End of Life Choice Bill on euthanasia goes to referendum. 2020 New Zealand euthanasia referendum. The New Zealand euthanasia referendum is a binding referendum[1] that is to be held in conjunction with the 17 October 2020 general election and referendum on personal cannabis consumption. 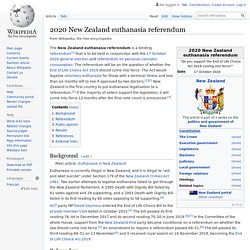 The referendum will be on the question of whether the End of Life Choice Act 2019 should come into force. The Act would legalise voluntary euthanasia for those with a terminal illness and less than six months left to live if approved by two doctors.[1][2] New Zealand is the first country to put euthanasia legalisation to a referendum.[1] If the majority of voters support the legislation, it will come into force 12 months after the final vote count is announced.[3] Background[edit] Euthanasia is currently illegal in New Zealand, and it is illegal to "aid and abet suicide" under Section 179 of the New Zealand Crimes Act 1961. Two earlier attempts to legalise euthanasia failed to get through the New Zealand Parliament. History of Euthanasia in New Zealand – Eldernet Gazette. The origin of the word is the Greek eu thanaos, meaning ‘good death’ or to die well without pain. 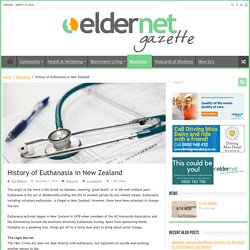 Euthanasia is the act of deliberately ending the life of another person by non-violent means. Euthanasia, including voluntary euthanasia, is illegal in New Zealand. Euthanasia's parliamentary battle is won. Now the real fight begins. Politics Euthanasia supporters have finally won the support of Parliament, with David Seymour's End of Life Choice Bill succeeding where others had failed. 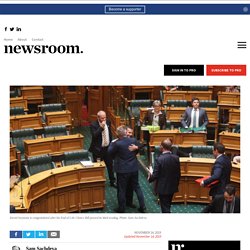 But with the fate of the law now in the public’s hands, the real war may just be beginning. After months of debate and controversy, the final vote on euthanasia reform was almost an anti-climax. As NZ votes on euthanasia bill, here is a historical perspective on a 'good death' This week New Zealand’s parliamentarians will vote on the third reading of the End of Life Choice Bill. 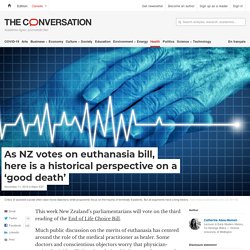 Much public discussion on the merits of euthanasia has centred around the role of the medical practitioner as healer. Some doctors and conscientious objectors worry that physician-assisted suicide will alter the relationship between doctors and their patients. They argue it is unethical, often invoking the Hippocratic oath. The oldest code of medical ethics, the oath dates to around the fourth century BC and is still sworn by doctors today. David Seymour's euthanasia bill triumph. If a majority of voters don’t back it, it’s unlikely that a new bill will appear for some time. 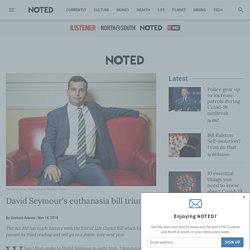 Rejection will inevitably mean that politicians — who for decades have avoided tackling the topic like the plague — won’t go near it again for a long while. It is true that polls for more than 20 years have consistently shown a handsome majority for legalising assisted dying but ratification of the End of Life Choice Bill, if likely, is not certain — not least because an extensive, well-funded campaign will be mounted to sway the public against it.

Parliament passes euthanasia bill in night of emotionally charged speeches; now it's up to voters. Euthanasia legalisation has passed its final hurdle in Parliament - moving the decision out of the hands of parliamentarians and into the public. 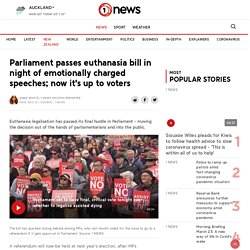 Your playlist will load after this ad The bill has sparked strong debate among MPs, who last month voted for the issue to go to a referendum if it gets approval in Parliament. Source: 1 NEWS A referendum will now be held at next year’s election, after MPs voted 69-51 in favour of the third reading of the End of Life Choice Bill. Euthanasia bill passes 69-51, sending the final decision to a referendum.

New Zealanders will vote on whether euthanasia should be legalised next year after a long-fought bill passed 69 to 51. 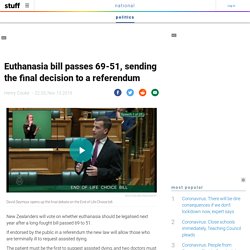 If endorsed by the public in a referendum the new law will allow those who are terminally ill to request assisted dying. The patient must be the first to suggest assisted dying, and two doctors must agree that the patient is well-informed and other legal criteria are met. The End of Life Choice Bill, sponsored by lone ACT MP David Seymour, passed 69-51 on Wednesday evening. READ MORE: * Lecretia Seales' mother wants MPs to look past 'emotive rubbish' * Euthanasia bill very likely to pass, Stuff poll of MPs finds * What Labour will worry about with a euthanasia referendum.

Euthanasia bill passes final vote, goes to referendum. Parliament has passed a bill legalising voluntary euthanasia in a historic vote, and turned the final decision on assisted dying over to the public. Politicians on Wednesday night voted through Act leader David Seymour's End of Life Choice Bill 69 votes to 51, after a debate ending two years of fierce political arguments about the legislation and decades of attempts to get reforms through the House.

It will now go to a public referendum alongside next year's general election for a final test. Since the bill – which would let terminally ill adults request assisted dying – was introduced in 2017, Seymour has devoted the bulk of his time to seeing the legislation through eight protracted parliamentary debates and a record 39,000 submissions from the public. READ MORE:• Euthanasia law critics gather for final push• Parliament faces historic final euthanasia bill vote• Euthanasia bill passes second reading• 1000 Kiwi doctors sign letter against euthanasia. Euthanasia bill passes final reading in Parliament. The third and final reading of the End of Life Choice Bill has been passed in Parliament by 69 votes to 51. Protesters against the Euthanasia Bill gather outside Parliament. Photo: RNZ / Dom Thomas The member's bill, in the name of ACT leader David Seymour, allows terminally ill adults to request a medically-assisted death.

It cleared its second reading 70 votes to 50 in June and easily passed tonight after impassioned debate. However, it will still take a majority referendum result at next year's General Election before the legislation can be enacted. Cheat Sheet: David Seymour’s big push to get the numbers for euthanasia. With the last parliamentary vote on David Seymour’s End of Life Choice bill ahead of him, the ACT leader has put up what he’s hoping will be the finishing touches on the euthanasia law. So what does it all mean? Alex Braae explains. Euthanasia bill passes second hurdle, but huge challenges remain. OPINION: David Seymour and other backers of assisted dying will be celebrating after his long-fought End of Life Choice Bill made it through its second reading on Wednesday night.

Seymour's bill passed by 70 votes to 50, a slimmer margin than it did at first reading in late 2017, but well above the 61 votes required. The vote followed 20 emotive speeches from MPs, many of whom mentioned close ones they had seen die in painful ways. Labour and National MPs were allowed to vote according to conscience, while NZ First and Green MPs all voted in support as a bloc. The victory will frustrate the strong lobby which has campaigned relentlessly against the bill over its marathon legislative process, a lobby with unlikely bedfellows such as former Prime Minister Bill English and Human Rights lawyer Deborah Manning.

What can New Zealand learn from the Brexit omnishambles? How many people would die under Seymour's bill? Is assisted dying a Pākehā issue? The euthanasia debate: An in-depth look into the End of Life Choice Bill. Newshub poll: Most New Zealanders support euthanasia. Lecretia Seales's husband: 'Her reaction utterly broke my heart'. End of Life Choice Bill: what does it say?